Questions But No Answers 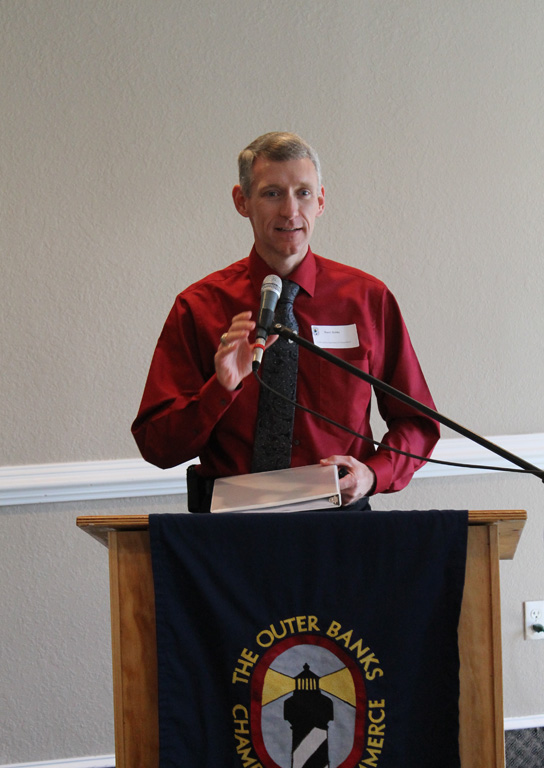 Held at the Sea Ranch Resort in Kill Devil Hills, Hobbs’ presentation gave a good overview of past efforts to keep the Outer Banks roads open and where current projects stand; however, Hobbs was unable to answer a number of questions about future projects.

Perhaps most critically to the northern Outer Banks, the Mid Currituck Bridge project appears to be stalled.

The Record of Decision (ROD), the necessary final step before contracts can be let and construction can begin, has been stalled for over a year. Although the final Environmental Impact Statement was approved in June of last year and the ROD was scheduled to be issued in December, at this point in time there is no indication when the document will be issued.

Hobbs noted the current state legislature may not approve funds for the bridge, a move that would effectively kill the project. A joint public/private partnership, the state of North Carolina has contractual obligations it must meet to keep the project moving forward.

If the state does not meet its financial obligations to its private partners, it is unlikely the partnership will survive.

Perhaps the only substantive good news Hobbs discussed was the observation that dredging of the Hatteras Channel had begun—the only way to reconnect the ferry link between Hatteras Village and Ocracoke.

The other news concerning Hatteras Island was not as clear cut.

Although the ROD for the replacement span for the Bonner Bridge (Oregon Inlet), has been issued and a contract awarded, the environmental impact statement is being challenged in court. “It’s in the hands of the judge right now,” was the comment that Hobbs made.

The permitting process for a permanent replacement bridge over the inlet that was created by Irene has begun, but lawsuits may drag the process out.

The Rodanthe S curves, arguably the most dynamic stretch of road on the Outer Banks, is a problem searching for an answer. Breached twice in the past two years, the current solution—building a wall of 18 ton sandbags and creating a dune line from that—has not worked. The Atlantic Ocean has repeatedly demonstrated its ability to toss the sandbags to the other side of the road.

The Army Corps of Engineers has proposed beach nourishment for that stretch of road. Because the S Curves are on federal land (Pea Island National Wildlife Refuge), if nourishment proceeds, it would have to be done by a federal agency.

However, a number of shoreline geologists point to the underwater geology of the seabed off Rodanthe and do not believe beach nourishment is practical at that location (see our North Beach Sun Spring 2012 Real Estate article, “Curve of History.”).

The luncheon was informative. Hobbs’ overview of current DOT projects gave a good sense of what the department is hoping to accomplish on the Outer Banks. However, without specific answers to some of the biggest transportation problems facing us, many questions remain.