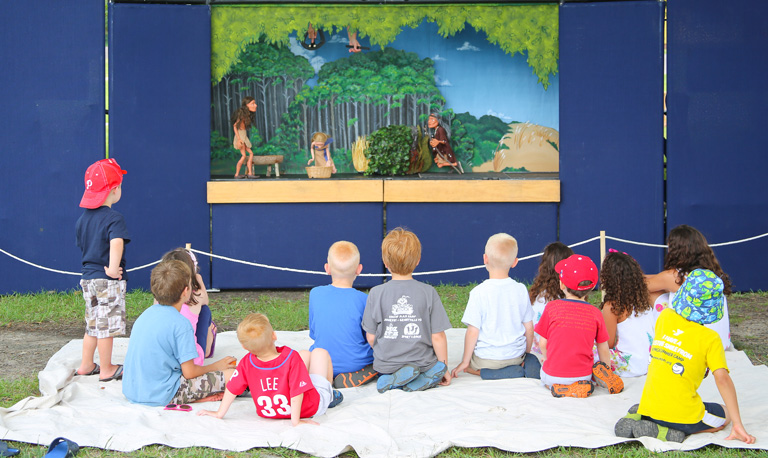 “The White Doe” in performance at the Whalehead Club.

Instead, she transforms local folktales into marionette shows.

“Tom Benn and Blackbeard, the Pirate” is based on a 1954 book of the same name by Le Grand Henderson, and is an Ocracoke folktale. In the summer, “Tom Benn and Blackbeard, the Pirate” is performed Tuesdays at the Tanger Outlets in Nags Head. “The White Doe”, a poem by Sallie Southall Cotton, is a Roanoke Island folktale about Virginia Dare of the Lost Colony. It’s performed Thursdays at the Whalehead Club in Corolla. Both shows run about 40 minutes and are free to attend.

Kasten sells her books of the “Tom Benn” show script with pictures from the show at performances. “The White Doe” book should be available soon.

Kasten earned a master’s degree in opera performance from the Mozarteum in Salzburg, Austria.

She discovered the Salzburg Marionettes, and says of marionette shows, “It’s a pretty incredible image to see. It’s something you don’t see a lot in this country.”

When the economy tanked, her opera career took a hit. Remembering her time in Salzburg, Kasten made plans to create an Outer Banks marionette theatre.

Kasten, her husband and their 18-year-old daughter and 13-year-old son started making puppets.

They sculpted each body part out of clay, made a plaster cast of each and poured latex into the casts, she explains. One-third the size of humans, the marionettes and all their props and scenery must be hand-constructed. “Nobody makes that size,” Kasten says.

Her husband, naturally detail-oriented, is an architect with Cahoon & Kasten in Nags Head. Kasten is admittedly her husband’s opposite, more focused on the big picture, and the resulting string puppets are masterful creations.

Three years ago, after creating 12 puppets, an Outer Banks Community Foundation grant allowed her to pursue marionettes. The grant enabled construction of a stage nine feet tall and nearly 20 feet wide to accommodate 12 puppets; professional lighting and sound systems; and in-person instruction by Phillip Huber, a world-renowned puppeteer whose credits include Being John Malkovich and the China Doll marionette in Oz the Great and Powerful.

“Phillip said the puppets were incredible,” she says, but he disassembled them to add wooden joints. “I was in tears—literally in tears when he told us to take them apart,” she recalls. “A puppet takes about 400 hours to make.”

“He said, ‘If you can wad up the marionette into a ball, you know you can do whatever you need to with it,’” Kasten says, putting Tom on his back and pulling his arms and legs to his chest to resemble fetal position.

Huber taught her to train other puppeteers, stressing focus, level and balance. Kasten explains that the puppets always have to be focused on something; it is not desirable to have hovering or waddling puppets and balance should be centered over the feet so they don’t lean back or forward when walking. 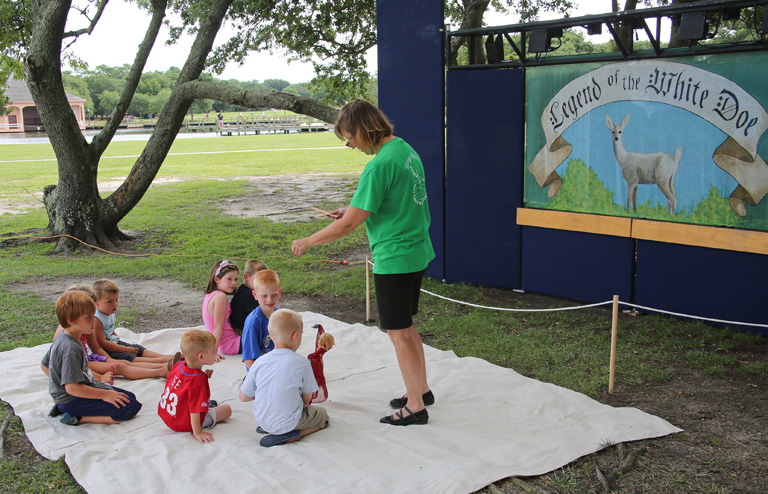 For “The White Doe,” Kasten and family constructed 12 wooden puppets, which make more of a clacking noise, but allow more flow of movement, she says. Her husband drew the patterns, cut each body part out of wood and sanded them down. They sculpted hands and hollow heads in clay, made molds and poured in OOMOO, a silicone rubber. The final step was painting the faces, making clothing and attaching hair.

“We have 25 puppets at this point,” Kasten says.

She and her husband are now artists in residence with the North Carolina Arts Council and performers with Young Audiences of Virginia. Kasten is currently working on a more financially accessible show option for smaller groups, and hopes to do more with libraries and schools.

The Big Story Book, a 42-inch-tall wooden book frame they created that opens to be 90 inches across would provide a backdrop for such shows.

They have given meet-and-greets, walking puppets around to interact with people, at the Graveyard of the Atlantic Museum in Hatteras and during Faire Days at Scarborough Faire in Duck. “Faire Days are great,” she says. “Kids come up; we are mobbed.”

North Carolina Marionette Theatre offers scarf marionette workshops, where kids make puppets from cotton scarves and wooden beads. “Even little kids can work them,” she says. “We send out about 100 of these into the world every year.”

It will take two years to make puppets for another full-scale production; so in summer 2015, the theatre hopes to add a third show to its repertoire. For more information, visit www.northcarolinamarionettes.com.