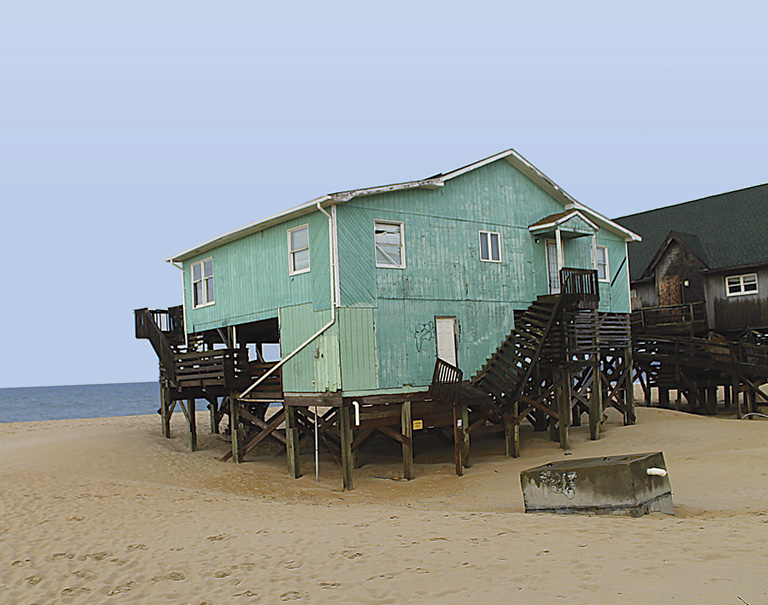 The house owned by Cherry, Incorporated. The house is one of a number of condemned structures on the ocean side of East Seagull Drive in South Nags Head.

Tucked away in the arcane language of legal briefs are real-world implications. A recent civil suit, the Town of Nags Head vs. Cherry, which is on the doorstep of the State Supreme Court is one such case.

At the heart of the debate are two fundamental questions: How does the state enforce laws giving access to public lands along the coastline; and what protections do individual property owners have as the shoreline changes?

After a series of fall storms in 2008, the beachfront home owned by Cherry, Inc. appeared to be in the “wet sand zone” of the beach and had suffered damage to its septic and electrical systems.

What the Courts Said 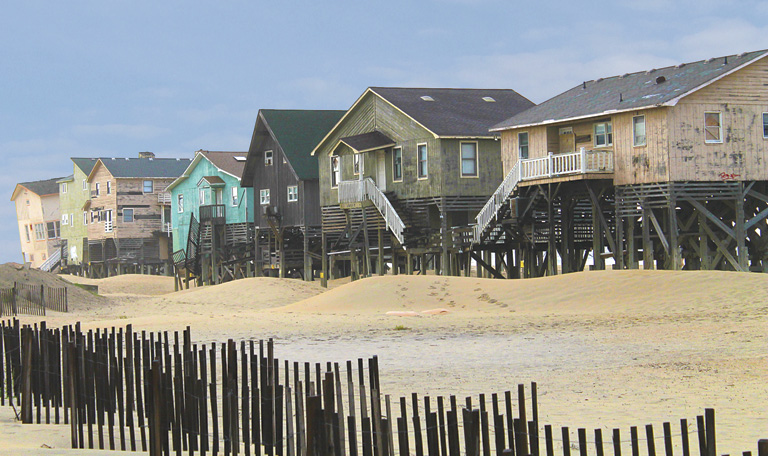 From July through December of 2010 both Nags Head (the plaintiff) and Cherry, Inc. (defendant) filed a flurry of legal documents finally appearing in Dare County Superior Court in December of 2010. At that time, the defendant was asking the court to dismiss the case and Nags Head was seeking a court order directing Cherry to demolish or remove the structure.

Agreeing with Nags Head that the property was a public nuisance in land held in the public trust, the court ordered the defendant to remove the structure and gave them 20 days to do so, after which the town of Nags Head could enter the property and take the necessary steps.

Cherry appealed the verdict and, after reviewing the process under which Nags Head condemned the property, the Court of Appeals came to a different conclusion.

Noting that Nags Head ordered the removal of the structure based on public trust doctrine, the Appeals Court clearly felt there was no enforcement powers granted to local government in North Carolina public trust law. The court wrote, “ . . . only the State, acting through the Attorney General, has standing to bring an action to enforce the State’s public trust rights . . . we conclude that this claim must be dismissed.”

It’s not clear what the full impact of this decision will be if it stands.

The ruling itself is actually very narrow, pertaining only to public trust lands (all North Carolina beaches fall into that category) and whether or not local governments can enforce public trust laws.

The Division of Coastal Management administers the Coastal Area Management Act (CAMA) and all public trust lands fall under their jurisdiction.

The ruling does raise questions about how those public trust laws would be enforced. Michelle Walker, Public Information Officer for CAMA, notes that the powers granted to CAMA are limited. “We have the authority to impose fines,” she says.

Beyond imposing fines, however, the agency has relied upon local governments to enforce their zoning requirements, and there is uncertainty about the implications of this ruling. “It will be a whole new arrangement if someone says we’re the only ones with the power to enforce our regulations,” Walker says.

Nags Head town attorney, Ben Gallop, echoes that thought. “The reality is the state believes the town has the right to do this. The town is a state actor,” he adds.

The ruling does not affect at all other means local governments have available for removing homes or structures they feel are a danger to the public, a public nuisance or have encroached up public trust land.

Properties can still be condemned, eminent domain can still be utilized and the permitting process remains an important part of how towns enforce their zoning regulations.

The Court of Appeals sent this case back to superior court to determine if the structure was unsuitable for habitation. There was considerable back and forth on this subject—the defendant pointing out that the only things needed were minor structural repairs and permits to reconnect the septic system and electricity. Noting that the structure was now located in public trust land, Nags Head refused to issue the permits.

The house is still standing, and although Nags Head pursued beach nourishment the beach has already significantly retreated and there is only a narrow strip of sand between the incoming tide and the pilings of the house. Whether that effects the future of this case may be in the next round of hearings.