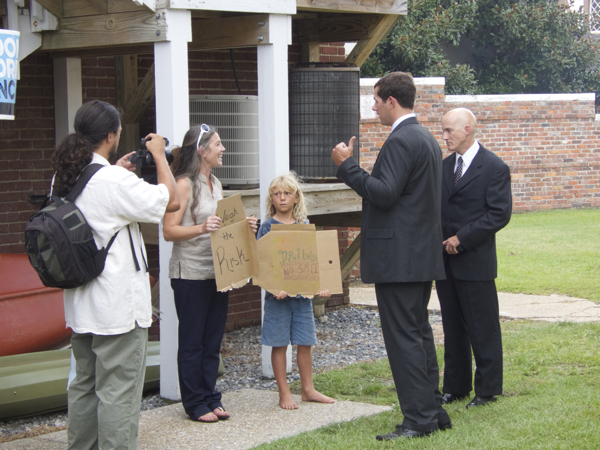 Get off the sidewalk. Members of Governor McCrory’s team confront protestors behind the old Dare County Courthouse. Doug Kenyon with camera and Amanda Hooper with sign reading, “Weigh the Risks.” Photo Kip Tabb

As Governor Pat McCrory came to Manteo Friday afternoon to celebrate the success of a number of transportation initiatives, he was greeted by 35 or 40 protestors calling attention to the governor’s position favoring offshore drilling.

Organized by Not The Answer NC, the protest started across the street at Poor Richards Restaurant, but a group of sign holders took their message to the sidewalk bordering the back of the old Dare County Courthouse property. According to protestors, property owner and former Manteo mayor, John Wilson, had given them permission to be on his property to demonstrate. 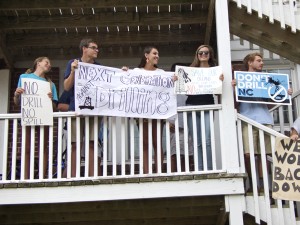 Members of the Manteo High School Environmental Action Committee holding up signs after being told to leave the sidewalk.

McCrory’s people approached Amanda Hooper who was the adult with the kids from the Manteo High School Environmental Action Coalition and some younger children and told her the protest was not allowed there. Told the protestors had the permission of the property owner, McCrory’s representatives called the Manteo Police, who determined that the sidewalk was a public thoroughfare and under the terms of the permit was not allowed.

Because they had permission to be on the property, though, protestors climbed to the second floor balcony, where their signs could be easily seen by participants at the upstairs gathering in the Courthouse.

Reporters were not permitted at the Governor’s meeting and accurate reporting of what was said is not possible. According to a number of people who did attend, the Governor talked about the steps his administration has taken to pass legislation to insure the Mid Currituck Bridge is built and the agreement between NCDOT and the Southern Environmental Law Center allowing a replacement span for the Bonner Bridge to be built.

In addition to the $1.1 billion in construction costs those projects will bring to Northeastern North Carolina the Governor also discussed plans to fund improvements to US 17 that he is hoping to pay for with bonds. 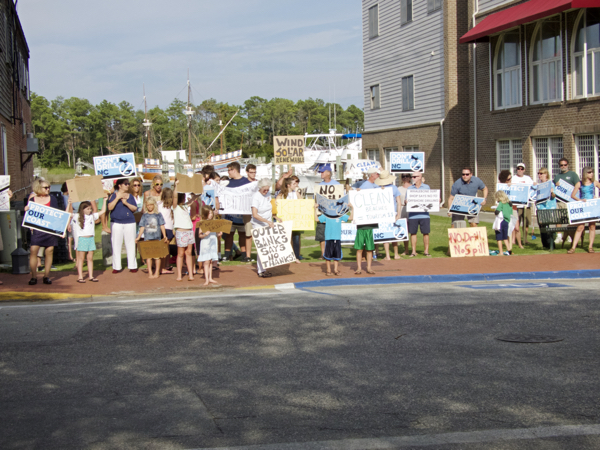 A number of the people attending the Governor’s meeting expressed dismay that protestors would gather at a time when he was coming to the Outer Banks to share some great news about transportation projects.

One woman came to the back porch of the Courthouse and told the students they were a disgrace to the town of Manteo, according to David Giles, one of the members of the Environmental Action Coalition.

The Governor represents a part of American culture and tradition and protest is very much a part of both that tradition and culture. The first amendment to the constitution guarantees that: “Congress shall make no law . . . abridging the freedom of speech, or of the press; or the right of the people peaceably to assemble, and to petition the Government for a redress of grievances.”

This was a peaceful demonstration and it would be hard to imagine a more direct petition to the government than signs held up where the Governor of this state can see them asking him to not allow offshore drilling.

The issue of whether or not offshore drilling should be allowed is irrelevant compared to “the right of the people peaceably to assemble, and to petition the Government for a redress of grievances.”

The people who objected to the protests outside the Courthouse seem to have forgotten this basic premise underlying what it means to be an American. If there comes a time when they are in disagreement with a sitting governor, I hope they remember this and understand why it is such an important part of who and what we are.