Chris Herren created a private Hell and, and at every opportunity to turn aside from the horror he was creating, he instead placed one foot in front of the other, and kept walking the path of self-destruction.

He’s four and a half years sober now, the length of his sobriety easy to mark because it roughly coincides with the birth of his third child—the only birth he witnessed sober. Yet even that moment of joy and pride was not enough to bring him back from the brink. It was another three months before he was finally able to stand tall among the demons that threatened to consume him and understand that he could be all the things he wanted to be without the aid of drugs and alcohol.

He is a realist—he knows that many of the kids listening to him speak will react the way he did when he heard a similar story as a freshman in college. “My future is bright,” he thought to himself at the time. “I’ll never be a drug addict.” 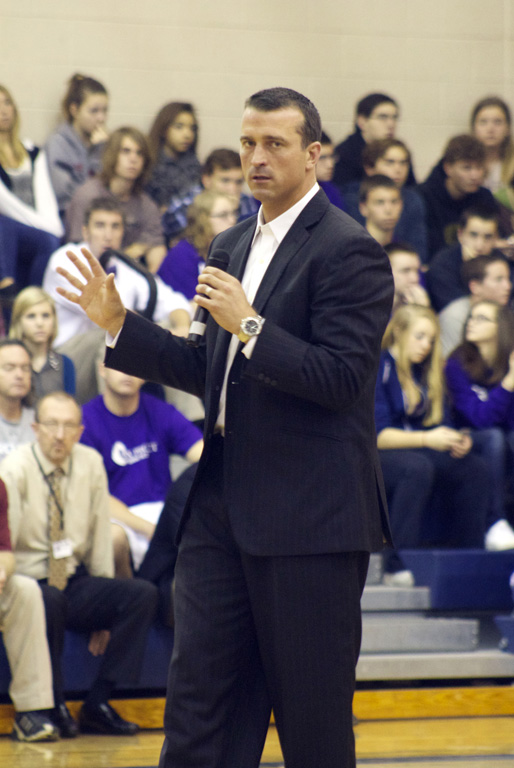 Chris Herren had it all—McDonalds Basketball All-American in high school, a scholarship to his home town university, Boston College . . . and he threw it all away. A chance with redemption came with Jerry Tarkanian at Fresno State—and there, too, he burned his bridges with drugs and alcohol.

After a stint in rehab, he had a chance in the NBA—but instead of being the hero of his tale, he was the enemy that kicked the pedestal from beneath his own feet.

Time and time again he had an opportunity to be something other than what he had become—an addict, a junkie, an alcoholic . . . for 14 years he faced choices that could have brought him out of the hell he was creating and at every pass, he failed the test. Every drug imaginable he consumed: alcohol, cocaine, oxycontin, heroin.

It is painful listening to his life story—yet it is that discomfort—that inescapable, consuming truth of his tale, that makes him so effective in speaking to high school kids.

The Herren Project was founded in 2011 as a way to help at risk communities battle addiction. Project Purple is an outgrowth of that—a way to aid high school and middle school students have the courage to make constructive choices.

Herren is kicking off his 2013 Project Purple on the Outer Banks—largely due to the interest and support given to it by the local community. “There is one place that really embraced this, and that place is First Flight High School,” he said in his concluding remarks.

With a generous donation from Southern Bank and a lot of leg work from the people who live here, a three day event was organized that included the northern Dare County high schools and a fundraiser at Jennette’s Pier on Sunday night.

At the end of his presentation at Jennette’s Pier he included an observation that was telling about how kids think and the power of addiction. “I used to be jealous of the kids who would drink water,” he said. “And walk around the party and not have to change who you are.”

Project Purple was brought to the Outer Banks by the OBX Project, an outgrowth from the concepts Jeff and Kelly Tobin developed. According to their mission statement, “OBX Project works through schools and community organizations to provide education and resources, mentoring opportunities and support for programs that encourage healthy, positive self development and standing up to substance abuse.”

For more information about the OBX Project, check out their Facebook page (facebook.com/ObxProject) or call them at (252) 216-8045.