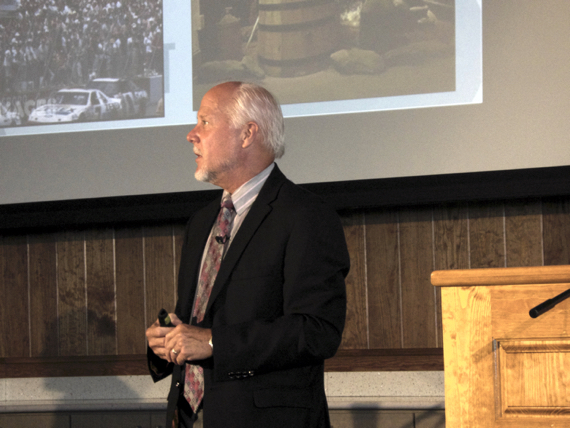 That is the message that Fred Brason founder of Project Lazarus brought to Dare County last night at Jennette’s Pier: there is no one solution, no one magic bullet, that will cure all the problems of drug abuse in this community or any community. Rather, the path to success lies in utilizing and coordinating all the resources within a community—peer pressure, medical and pharmaceutical, the faith community, local health departments; and that is just a partial list.

Brason was a hospice director and chaplain in Wilkes County, North Carolina when he encountered a problem—he found people in end of life care too often had trouble getting the pain medication they needed or the medication was inaccessible to them. As he investigated he discovered the underlying cause.

“By 2007 Wilkes County, North Carolina was the third worst county in the United States of for overdoses of prescription medications,” Brason said.

As he dug deeper into the reasons underlying the numbers, it became apparent that no one piece of the community could effect change but by coordinating the effort, real change could be created.

The effects can be devastating—as Wilkes County showed. But an approach that integrates the various facets of a community can have a dramatic effect. In three years, Wilkes County reduced its prescription drug death rate by 69%.

In Dare County some of the Project Lazarus steps have already been taken. One of the first initiatives Wilkes County began was changing how the local hospital prescribed pain medications. Before the Lazarus recommendations were implemented, a patient complaining of pain would receive a 30 day supply of medication. That was changed to a three day supply with a list of doctors appropriate to the condition for the patient to see. A similar program has been implemented Outer Banks Hospital.

Dare County has also created a Provider Council on Prescription Drug Abuse, a committee of providers—pharmacists, doctors and medical professionals—that coordinates efforts to limit drug abuse. One of the key components of the program is tracking patient pain medication purchases, making it more difficult to use multiple doctors for the same prescription.

He points to education as an important component, indicating a list that includes diet, exercise, chiropractic and counseling. “Most people don’t have that education . . . Most people aren’t even aware that this would help them. Most people would say, ‘It’s that bottle right there and if I don’t have that I’ll be in pain.’ Well maybe so but if you do this and that, maybe you’ll need less of that (drug).”

There are other component to the program as well. Brason observes that addiction is not a choice. “Nobody chooses addiction, but addiction chooses someone everyday,” he said.

His message is that after identifying someone who is abusing pain medication—and in many cases they are not even aware they are doing so—the next step is to get them help.—which is also part of the program.

One of the most visible aspects of Project Lazarus is helping police, EMT and others get naloxol, a drug that will within seconds reverse the effects of opiates in the brain, and it is brain that tells the body to stop breath in an overdose.

According to Dare County Sheriff Doug Doughtie, 39 does of the drug were given in Dare County last year and to Brason that is perhaps the most important step that can be taken to getting someone into recovery.