Preserving More Than an Old Home 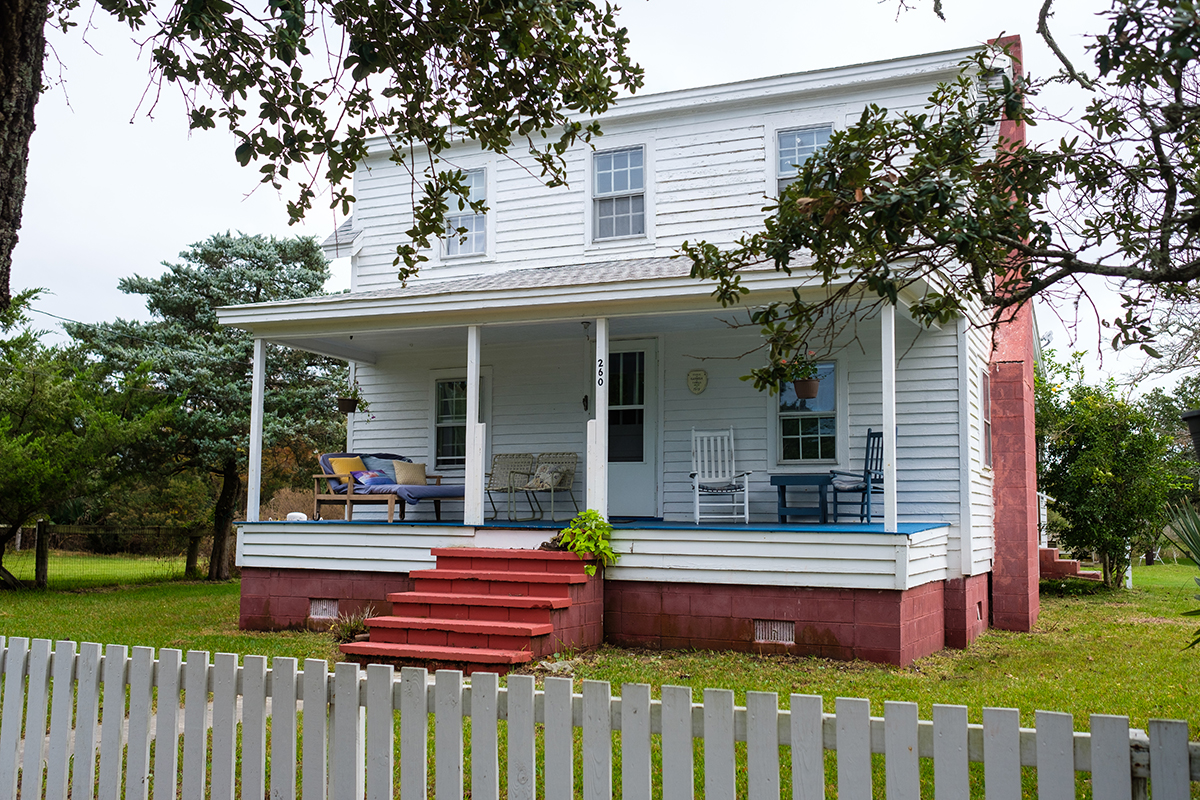 The village of Ocracoke is no more than a mile long in any direction. It’s hard to get lost.

If, by chance, you were to get lost, then there’s no doubt you’d find yourself ambling past one of Ocracoke’s more than 200 nationally registered historic places. Each of these structures – most of them private homes – come with a story that is touched by pirates, shipwrecks, times of war, or simply good food and gatherings. In these stories, it is easy to get lost. 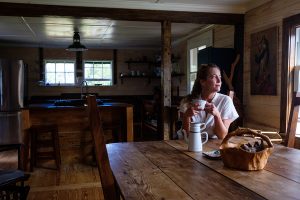 Author Kelley Shinn sits at her kitchen table. Old wood found during the renovations was used to craft the kitchen island just behind her.

Four years ago, I became the first non-native to own the Charlie W. Garrish Sr. Family House, circa 1913. The home is located behind the British Cemetery, a cemetery named in honor of the British soldiers who lost their lives when a German U-boat sank their ship during World War II. The soldiers who washed up on the shore are buried there. Once a year, an ambassador from Britain returns to the island, and there is a ceremony to commemorate the historic event and the men who gave their lives. I can sit on my “pizer” during the ceremony (the O’Cocker term for porch, from the Italian piazza) and listen to the bagpipes and the stories that carry through a buffer of live oak trees. 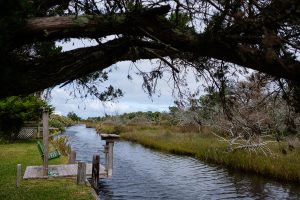 The house’s backyard canal (or, what old-timers still refer to as “the ditch”).

The Charlie W. Garrish Sr. home is a traditional “story and a jump” house that was favored on the island from the 1800s through the early 20th century. The one-and-a-half story home, like many other island homes, has had additions made to it throughout the years – and like the Ocracoke family homesteads of old, there are several outbuildings on the property.

As the tourist industry grew in the second half of the 1900s, many of those homesteads were divided into lots and sold to “dingbatters” (the O’Cocker term for folks not from around here, including me). So it was a very difficult decision for the three brothers who still owned their family home to sell it to me. In fact, when the eldest brother told me that the land could be split into three lots, my reply was, “Why in hell would anyone want to do that?” We shook hands shortly afterward.

The house, known on the island as “Conk & Micky’s” (a reference to the beloved parents of the three brothers who lived here for 50 years), is sturdy. It has withstood 104 years of hurricanes. In 1960,Hurricane Donna heavily flooded the house and 27-year-old Mildred Garrish, who later became known as Micky O’Neal, refused to come down from the second floor because a large black snake was swimming halfway up the stairwell. In 1973, it was raised six feet above ground onto cinder blocks for the first and only time. It has never flooded again. (Knock on wood.) 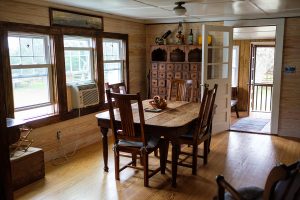 The dining room after the original wood flooring was restored.

Since day one, I have been keenly aware of what an honor it is to be a steward of this home and its history. Many babies were born in this house, and a few adults passed away here. There has been laughter and sorrow and bearing witness to the passing of historical events on this homestead. When the men play bagpipes and the shotguns go off in a 21-gun-salute during the annual British Cemetery ceremony, I think of the folks who lived in this house before there was this small live oak buffer, before there was a paved road and cars. Who sat on the pizer then, watching the bodies of soldiers as they were buried in the front yard? These things matter. 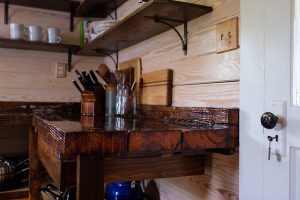 The kitchen counters were made with wood from an outdoor fishing table and old electric company cable ties.

So, when I moved in to find leaks in the roof, a rotted girder, mold issues, and faux-wood interior paneling (circa the 1970s) that was splintered and falling away from the interior wall, I grabbed a crowbar and some friends, and began to tackle it. Eventually, we tore through four layers of flooring and five layers of wall. Under all of those layers of linoleum, subflooring and paneling was a bevy of bead board, heart pine and red oak floors, a cache of marbles in between floors, and an old photograph of one of the brothers perfectly preserved behind the brick and mortar where the woodstove sat – all the residue of memory rising to the surface.I knew we’d found the original flooring when outside light shone through the floor in a few select places: Old Outer Bankers almost always drilled holes in their floors to help prevent the structures from being carried off their bases when flood waters rose. It may not be a coincidence that those holes are perfectly stopped up with wine corks. 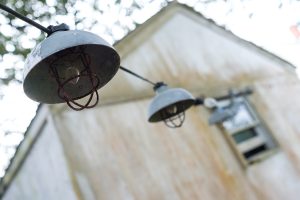 Lights strung up the side of the home’s backyard kitchen shed.

In the structure of the gutted home, we found pieces of shipwrecks (distinguished by shape, cut and color), and wood from the old Cherry Point Military Base in Havelock, some 70 miles south. We also found wood from one of the crates that carried the famous Sears, Roebuck and Company houses-in-a-box that were distributed just after WWII – and we used that to make a kitchen island.

We made the kitchen counters from Conk’s outdoor fish carving table, which he made from cable ties that he procured from the electric company, where he worked most of his life. In the old days, wood was scarce on the island, and folks combed the beach and wherever else they could for supplies. We tried to do the same when restoring the house, using as much from the old homestead as we possibly could. We wanted to preserve its story. 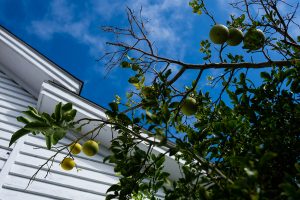 A lemon tree blooms in the yard.

As word of the project spread, the villagers – both native and non-native – began to come out of the woodwork. They told stories of times they’d spent at the homestead – dancing, shucking oysters by the ditch in Conk’s backyard kitchen shed, laughing. There was always laughter. The homestead had been a gathering place for many villagers, and they not only began to share their stories with us, but they brought us wood, an antique door, whatever they had that matched our needs, whatever they had to keep those memories alive.

While I’m in this home, I plan to keep the gathering place alive – full of the same laughter that has kept these hearty people going through tough times. And maybe, one day, someone else will sit on this pizer telling stories, and I will be one of them, a voice floating through the live oaks, a heart left over in a piece of wood.