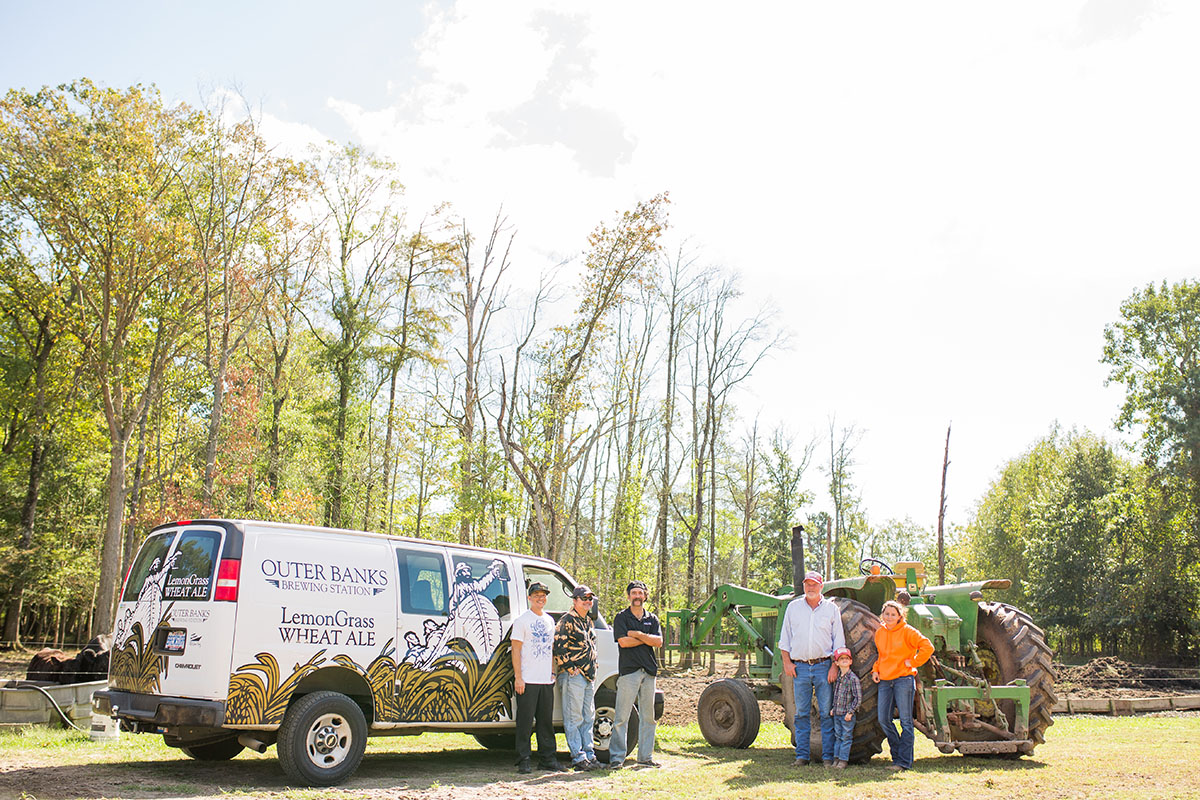 Recycling is being taken to a whole new level at the Outer Banks Brewing Station, where – for the first time ever – the latest fresh Angus beef on the menu comes from a steer fattened on the malted barley left over from making the brewpub’s beer.

It’s another way for the Kill Devil Hills establishment to promote its locavore and “farm to fork” ethos while putting the still-nutritious grain to practical use, according to co-owners Eric Reece and Aubrey Davis.

“It’s a beautiful, symbiotic relationship,” says Reece. “Depending on the type of beer we’re brewing, we can have 1,500 pounds of spent grain left over every week – and during the summer, it can be as much as 3,000 pounds each week.” 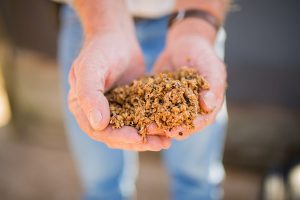 Cartwright holds a handful of spent grains from the Outer Banks Brewing Station.

In the process of brewing beer, malted barley is steeped in a mash that breaks the complex sugars down to simple sugars, which are then metabolized by yeast during fermentation. Once the liquid is drained, a lot of perfectly good barley is left behind – perfectly good, that is, for cows.

Hertford farmer Russell Cartwright makes the approximately 45-mile drive to the Outer Banks almost every week to pick up the brewing byproduct that’s left in six or so 55-gallon pickle barrels at the back of the restaurant. During the summer, he leaves at dawn to beat the traffic, but in the off-season, he may show up any time his farm schedule allows.

Cartwright, 58, has been farming all his life, and he now shares his family’s more than 500-acre farm with his brothers, who also grow soybeans, wheat, cotton and corn. On Cartwright’s 75-acre portion of the land, he focuses on raising cattle full-time with the assistance of his 16-year-old daughter, Sarah. He loves what he does, but there’s a lot more to it than most people realize.

Cows have four stomachs, he explains, and they eat a lot. On his farm, their diet also includes hay and soybean hulls, depending on how much spent grain is available from the Brewing Station and the Lost Colony Brewery in Stumpy Point (which has also started donating its grain recently). 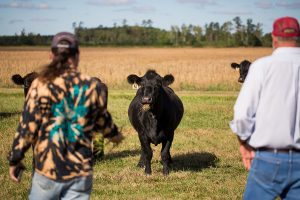 Davis and Cartwright approach one of several cows grazing in a field at the family farm.

“Actually, I wish I had more,” Cartwright says. “The cows love it.”

Feeding brewer’s grain byproduct to animals is not a new idea. In fact, the idea is likely as old as beer brewing. But with the proliferation of microbreweries in the past decade or so, it’s become a common food staple for cattle.

Since the Outer Banks Brewing Station opened in 2001, the brewpub’s spent grain has been either composted or given to several different livestock farmers over the years. After the last Currituck farmer decided it was too time-consuming to pick up the grain about four years ago, Reece and Davis met Cartwright, who was happy to pick it up regularly.

“They were getting it for free, but they didn’t like the travel,” Reece jokes. “You see, Russ is very Zen-like in his driving. He doesn’t get quite as upset as other people.”

Meanwhile, Reece says, the restaurant was having some difficulty obtaining enough fresh local beef cuts for its menu offerings. According to Head Chef Tony Duman, the kitchen can go through an average of approximately 30 to 40 pounds of strip loins, 40 to 50 pounds of beef tenderloins, 150 to 200 pounds of rib eye and about 300 pounds of hamburger meat each week during the peak season. 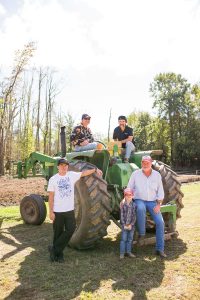 Clockwise from top left: Davis, Duman, Carter, Cartwright and Reece pose together on one of the farm’s tractors.

So when Cartwright asked if they would be interested in purchasing a whole cow, they were immediately intrigued. Not only could they have it processed nearby at the Acre Station Meat Farm in Pinetown, N.C., but they could also use the entire animal for all the different types of cuts they wanted, such as brisket, rib eye, tenderloin and ground – and they could even put the heart, tongue and liver to use.

Best of all? Cartwright could raise a calf from birth on the Brewing Station’s spent grain, and then take everything full circle by having it wind up on their menu.

Two years later, this past fall, Cartwright’s first Brewing Station grain-fed steer reached full size, and Reece and Davis bought the 624-pound “hanging weight” of the animal – that is, the usable meat. The next steer will be available sometime this December.

“I think the main importance of this is that we’re going one step beyond knowing the origin,” Reece says. “We know what it was fed. So we doubly want it to be the best product possible, because it was fed some really good European malt.”

“When you’re drinking one of our beers and eating a Cartwright steak,” Duman adds, “you’re enjoying two products created from the same source.” 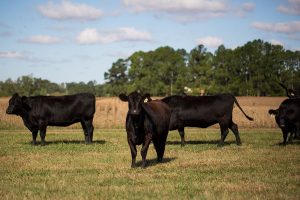 In-between feeding times, the cows on Cartwright’s farm graze freely on an open field by his house.

Duman, whom Reece calls the eatery’s “creative end,” says that they picked up the meat in person this past October, and immediately started running “Pasture to Plate” specials on the weekends. Over the course of this winter, they’ll continue to run a variety of specials with the Cartwright meat, in addition to experimenting with some creative tapas plates on Thursdays and using some of the ground beef for their Meatloaf Mondays. So far, they’ve even featured the meat at a few local events, such as the Outer Banks Seafood Festival and Brewtäg.
Reece, Davis and Duman also recently spent some downtime at the Cartwright family farm, where they were able to get a more complete sense of the entire operation.

“As a person who cooks and creates with food, it’s nice to be able to see and appreciate the whole process,” Duman says. “And it’s good to bear in mind that the farm’s so close by. The drive’s only a little over an hour. I
want to go back and take some of the guys from the kitchen and the servers. We all eat this food, so we should all know about it – be one with it, so to speak.”

“There is no similar product – there is no beef in nature that was fed our grain,” Reece adds. “This is truly as local as it gets.