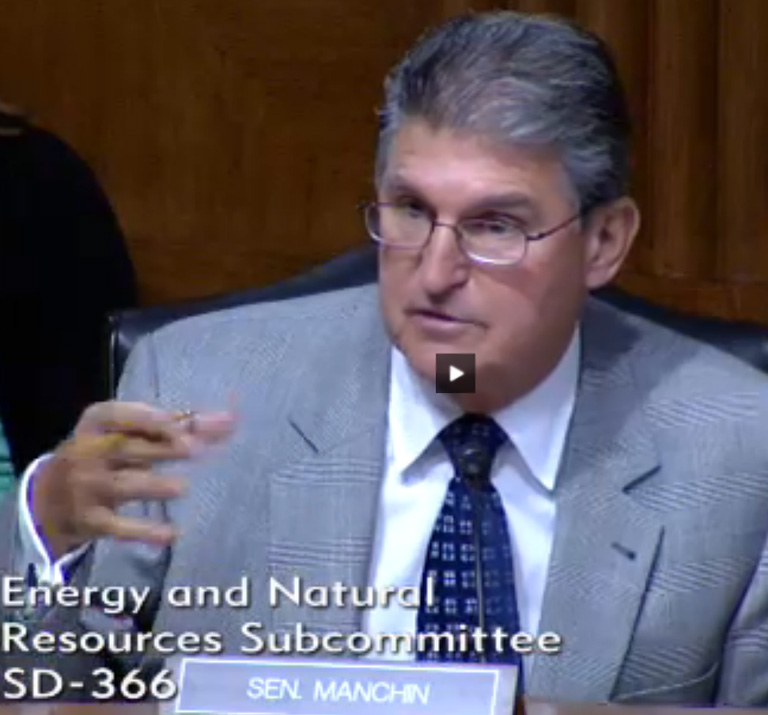 Senator Manchin. Image taken from video of the hearing

Yesterday’s hearing on Senate Bill S2372 generated surprising fireworks. The legislation, entitled “A Bill to Authorize Pedestrian and Motorized Vehicular Access in Cape Hatteras National Seashore Recreational Area”, would overturn the court ordered management plan for beach access to Cape Hatteras National Seashore and would reinstitute the negotiated interim management plan in force until 2008. An identical bill has already passed the House and if the Senate bill is voted out of committee, it stands a good chance of becoming law.

In the Subcommittee hearing Herbert Frost. Associate Director, Natural Resource Stewardship and Science for the National Park Service took a strong stand against the bill and in favor of the current consent decree. “The Department (of the Interior) strongly opposes S2372,” was his statement.

Manchin started by pointing out the assumptions contained in Frost’s statement to the committee that the court ordered consent decree was a cooperative effort was flawed. “Sir, I’ve been in that area quite a few times,” the Senator said. “The majority of the people that live there . . .  are totally in support of 2372. As a matter of fact, that is why there is a 2372. And most of the protests and lawsuits are coming from people that don’t even live there. Is that correct? Is it fair?”

“I don’t know if I know that as a fact,” Frost answered.

Manchin responded, “Well, you’ve been to public hearings down there, sir. You all know that.”

Manchin continued to point out inconsistencies in the NPS position. Noting that the Park Service had signed off on the 2007 Interim Plan, he wondered why the service was now not supporting that position. “Since you negotiated 2007 (the interim agreement) you should support 2372. You’re taking the most stringent approach  . . . saying you are opposed to 2007. That means you never did agree with your 2007 negotiated settlement.”

The Senator continued to ask very pointed questions, pointing out a number of inconsistencies and evasions in Frost’s answers.

At the end of his time, Manchin’s statement would seem to resonate with Hatteras Island residents especially. “It’s unbelievable the hardship you’re placing and that’s not government’s role. We’re supposed to be a partnership and an ally, not an adversary and enemy. And that’s what we’ve ended up being down there.”

There was additional testimony as well. Commissioner Warren Judge spoke about how the closures have effected the businesses that can least afford the impact “People near the closures are struggling to hold on to the American dream,” he said.

Derb Carter, the Director of the NC Office of the Southern Environmental Law Center, also testified.

In the past, the Democratic Senate has opposed similar bills. However, with Senators Burr (R) and Hagan (D) co-sponsoring the legislation, and with Senator Manchin’s strong support, the bill may come out of committee. As a rare example of bi-partisan cooperation, if the bill makes it out of the committee, it may pass the Senate.

Because the House has already passed identical legislation, there would be no need to reconcile the Senate and House versions and the bill would go to the President’s desk for his signature.

The link we have posted clicks to the National Parks Subcommittee Hearing. The video is at the bottom of the page and includes all testimony for that session.

Testimony specific to S2372 occurs at:

We are hoping to have an edited version of the video that will contain only the testimony specific to S2372.