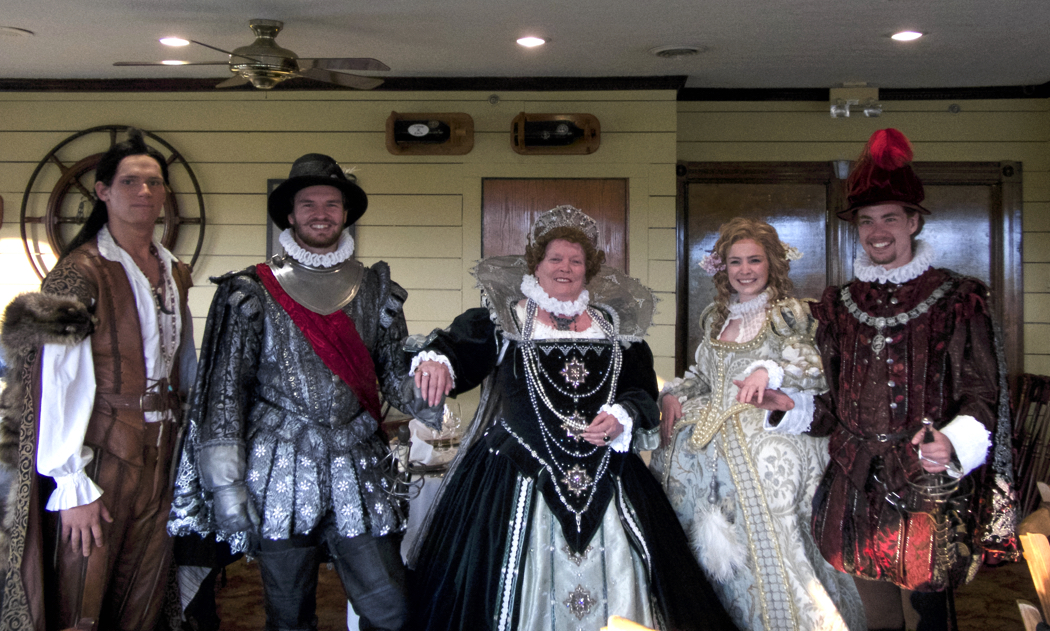 It seems a simple formula for members of the Lost Colony to be found—pour some wonderful wine, serve some excellent food and suddenly Queen Elizabeth, Eleanor Dare and an entourage of men of the court show up.

That was the formula for success at Pamlico Jack’s at the Sunday Night of Friends, Food & Fine Wine Benefitting The Lost Colony as the staff of the restaurant created as close to a perfect evening as there could be.

The wines were from Francis Ford Coppola Winery but there was a twist—according to Michael Mann from the winery, Coppola recently purchased a property in Geyserville, California and created Virginia Dare Winery. The labels bear a remarkable resemblance to the labels on the long defunct North Carolina Virginia Dare Winery—a wine producer that at the turn of the 20th century may have been the largest in the United Sates. 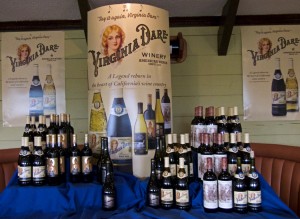 Virginia Dare Wines waiting to be poured at Pamlico Jack’s.

Mann mentioned that Coppola’s interest in Virginia Dare and the Lost Colony predated the dinner by some time. A born storyteller, the director of such classic movies as the Godfather Saga, Peggy Sue Got Married and Patton has been drawn to the story of the Roanoke Island colonists for some time.

Big kudos also to Doug Tutwiler and the staff at Pamlico Jack’s—fantastic food. The bbq bacon wrapped pineapple squares were a perfect appetizer, the sweetness and acid of the pineapple blending perfectly with the bacon; the main course was so good there as no way to choose among the roasted mahi in shrimp in puff pastry, pork loin medallions or the grilled Angus shoulder tenderloin.

Yet as good as the food and wine was, the evening was really about The Lost Colony and colonists Anais Dare and his wife Eleanor, Sir Walter Raleigh and Chief Manteo. Even Her Royal Highness, Queen Elizabeth showed up—in the person of Elizabeth Hird.

As usual she had some rather interesting historic tidbits to share. She mentioned at one point that she awarded Sir Walter Raleigh all the tax revenues from the wines that were imported into England ” . . . because at some point he was a favorite of hers.”

“That was not one of my better decisions,” the Queen went on to say. “And he spent it rather stupidly.”

We also learned that if what we now know as the Mother Vine ever produced wine, Chief Manteo would have been a rich man—he was to be Raleigh’s factor for the New World wines.

“Manteo, who became a Christian, was baptized and dubbed the Lord of Roanoke and Dasamonquepeuc. Dasamonquepeuc is more reasonably known now as Manns Harbor,” Hird told the guests. “Aren’t you glad!”

It was classic Barbara Hird as Elizabeth I—witty, insightful with her lines perfectly delivered.

Elizabeth’s appearance came as the main courses were being brought from the kitchen and that wonderful Virginia Dare Chardonnay was being poured. The perfect way to be served a perfect meal.