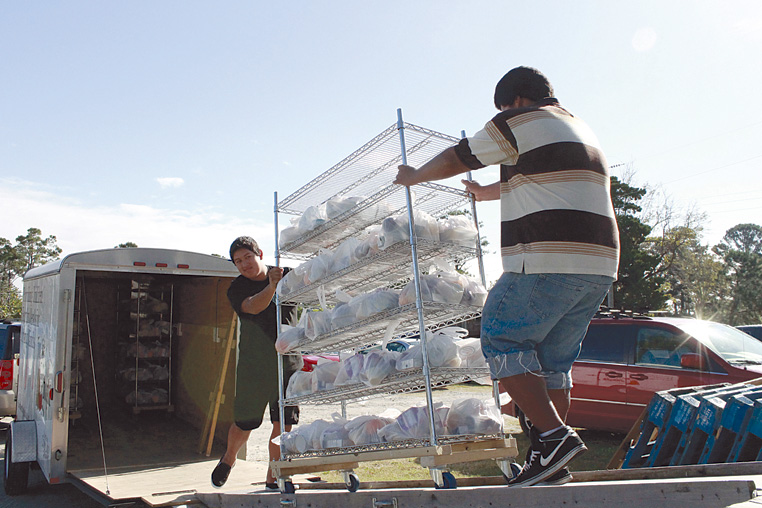 Although we are a remarkably generous community, the belief on the Outer Banks is that we take care of our own. If there is a need within our community, that need will be filled through the generosity of friends and neighbors, not filtered through the checking accounts of a national organization.

In that sense, Food for Thought is a uniquely Outer Banks organization—not the concept, which is at the heart of charitable giving and the moral compass of all charitable beliefs and religions. But the way in which it was organized and has subsequently grown to become part of how we care for our own, seems a part of how we define ourselves as a community.

The original idea for came from a simple belief that helping those in need was the right thing to do. In February of 2006 members of the Duck United Methodist Church began a pilot program to provide two breakfasts and two lunches for the weekend for 54 children at Manteo Elementary School.

“Everyone chipped in and we bought the food and took it to Manteo,” Nina Teller, Secretary of  Food for Thought, recalls.

It quickly became apparent that the need was much greater than 54 students in one building. At the beginning of the following school year, with seed money from the Outer Banks Community Foundation and donations from local businesses and individuals, the program expanded to include all county schools.

The program has grown, serving over 500 students, preparing over 2000 meals every Thursday from the maintenance building the county allows Food for Thought to use as a packing shed.

Although most of the volunteers are adults, at least two of the workers are from the Dare County Alternative School. The participation of the kids has been so successful that the school was one of five recipients in Dare County to receive the North Carolina Award for Outstanding Volunteer Service in 2011.

It is the idea that at the heart of community giving should be community involvement—the belief that there is satisfaction in giving back to where we live. “Knowing that Food For Thought is helping children in our local community is very important to me,” Loismary Hoehne, President of Food for Thought, says. “I have been delighted to be a part of this organization for 6 years.”