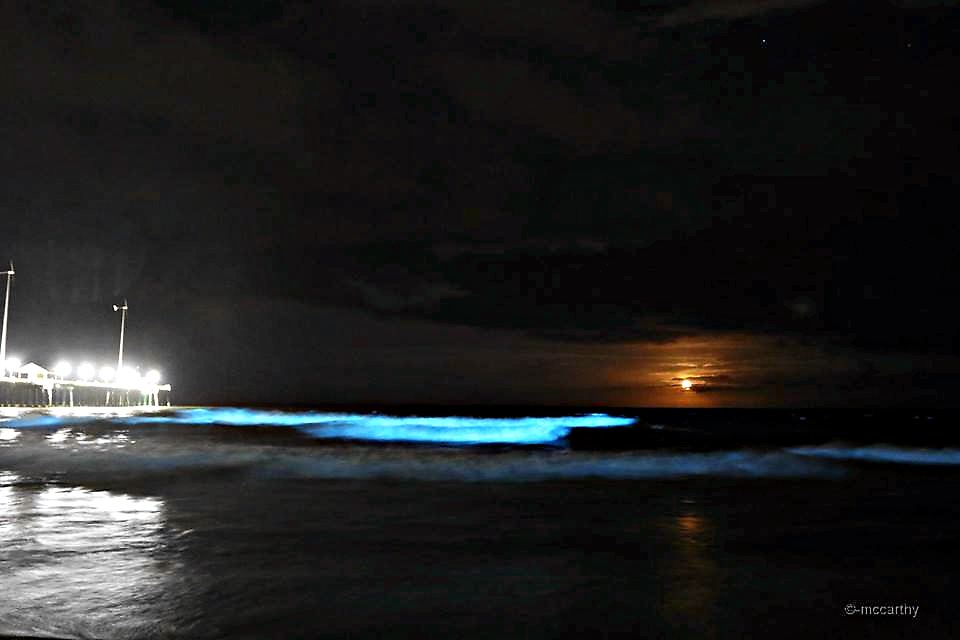 Saturday evening was Outer Banks perfection; the temperature held steady around 80, no threat of rain and as the sun set, the magic happened. As waves rolled in, the surf began to glow, each line of waves as the crest broke spreading glowing lights of blue and green.
A full moon played hide and seek with clouds, its reflected light flooding the sea in pale yellow and white, then disappearing, then reappearing again.

But it was the surf that held our attention; a wave would break and millions of points of light would spread across the crest, forming a solid ribbon of light against a dark and endless sea.

There is a scientific explanation for what we were witnessing, and a word for it—bioluminescence

The science that explains how it happens is fascinating in itself.

Marine bioluminescence is almost always caused by dinoflagellates, a species of plankton the are ubiquitous, existing everywhere from the tropics to the arctic. They are single-celled organisms that have animal and plant characteristics…and seem to have the ability to create their own light.

Inside the plankton there are a group of chemicals called luciferins. When dinoflagellates are stressed, they release an enzyme called luciferase that causes oxygen to react with the luciferins, creating light.

What is the stress? Moving water.

The theory is that the light is a defense mechanism against predators. The predator, as the theory goes, is startled by the light and turns away from dinoflagellates. The plankton, being single-celled, can’t distinguish between a predator and a wave, so the motion of the surf triggers the reaction.

The dinoflagellates that emit the light live in warmer waters. The ocean temperature over the weekend was between 75-78 and sea temperatures should remain in that area for the next few weeks; it is possible that there will be another light show, although I have lived on the Outer Banks for 22 years, and I have never seen anything like this.

It was an evening to be treasured in memory forever.

Bioluminescence is a cold light and landlocked creatures that we are, we actually witness it on a regular basis. The light that fireflies emit is created in a very similar manner to the light from dinoflagellates. If the light was not a cold light, the flickering luminescence would be a one time event, the heat of the light burning up the organism, whether firefly or plankton.