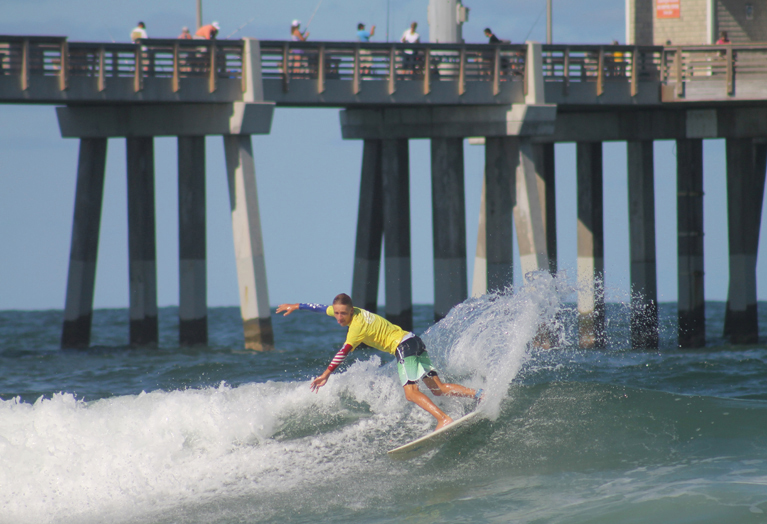 ESA competitor tearing it up in front of Jennette’s Pier.

What a spectacular week and weekend it was on the Outer Banks.

There was a big question mark at the beginning of the week for the ESA Easterns Surfing Championships. On Monday the wind was howling from the Northeast, the surf was large, chopped and unridable and the ESAs were already running behind because of the flat surf on Sunday.

Then the sun came out, the wind died down and the waves broke the way they’re supposed to, and what a week of completion it was.

Of course there were more serious things happening as well. NCDOT jumped a major hurdle on Monday when US District Court Judge Louise Flanagan issued a stinging rebuttal to the complete set of arguments the Southern Environmental Law Center presented to stop construction of the replacement for the Bonner Bridge.

Speaking of bridges, maintenance work has begun on the outbound span of the Wright Memorial Bridge. The impact during the week should be minimal, but weekend traffic will be slowed, as we discovered this weekend. The odometer on my car indicated a 3.5 mile backup on Sunday afternoon and that might have been conservative. The project is expected to wrap up in mid May of next year.

Here’s something that might be fun, and it has to do with the closed span of the bridge. Matt Costa, number one trainer at Outer Banks Boot Camp, is going to take a group of runners across the bridge on Tuesday morning. Sort of a way to mark the “official” closing of the bridge, although the bridge is already closed.

Don’t forget, Artrageous next Saturday 9/28 at Rec Park in Kill Devil Hills. This is the Dare County Arts Council’s celebration of kids and the arts and it’s always a great time. On Sunday the Don & Catharine Bryan Cultural Series brings two time Pulitzer Prize winning author, David McCullough to First Flight High School. McCulough’s books on the lives of our Presidents are considered some of the most readable and authoritative on the subject.