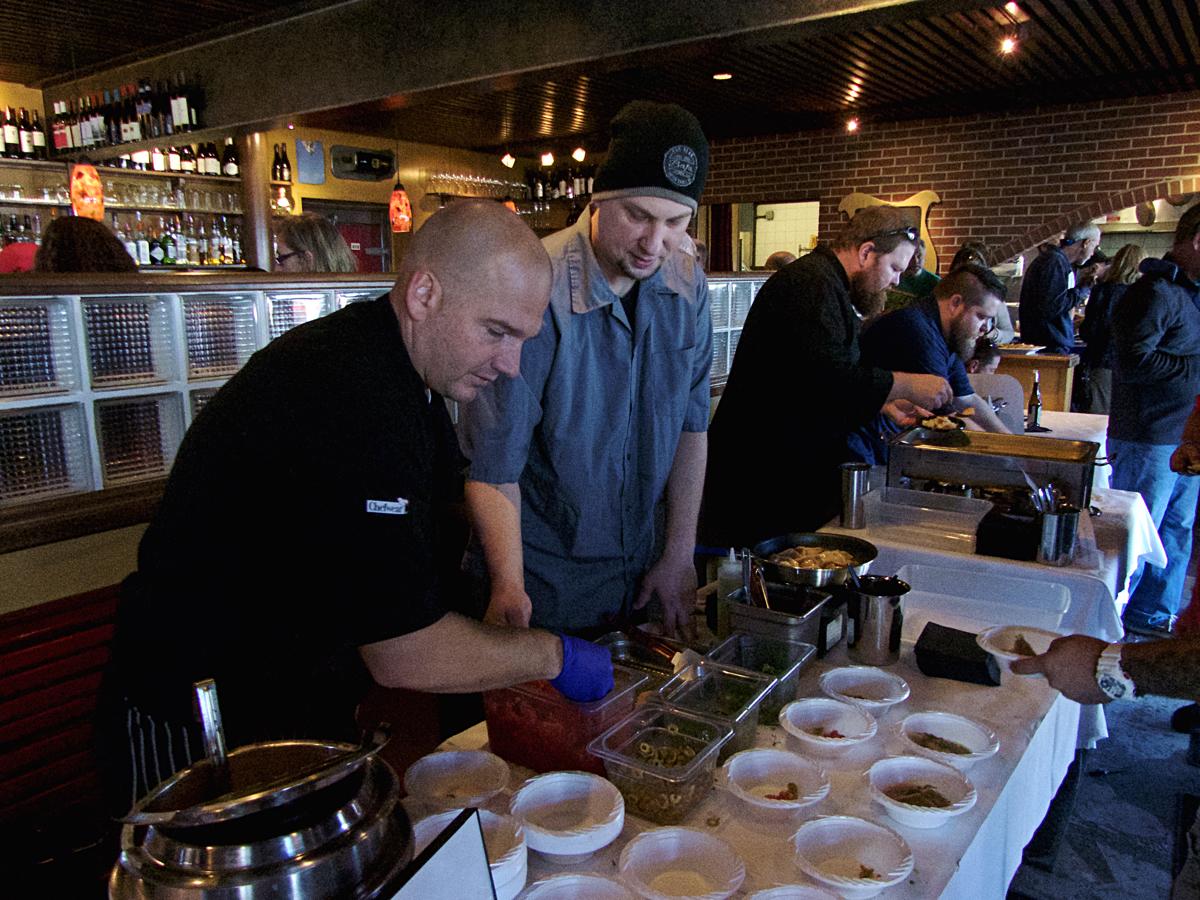 The 7th Annual Outer Banks Shrimp Cook Off—a great way to celebrate so much that is best about the Outer Banks. Great fresh seafood, world class chefs creating amazing dishes and it’s all for a good cause.

The Outer Banks Center for Dolphin Research (OBCDR) has been gathering data on dolphin populations in Roanoke Sound for the past eight years and the Shrimp Cook Off is an important part of how they fulfill their mission.

“It’s our biggest source of revenue,” OBCDR President Jessica Taylor said. If funds the majority of our boat expenses and field work.”

Donnie and Heather King, managers of Ocean Boulevard have been hosting the Cook Off since it first began back in 2009, and this may have been the most successful yet. Ten restaurants were on hand this year, the most ever and OB was packed with great food and the crowd was certainly elbow to elbow.

The sampling stations spread out from the main restaurant downstairs to three upstair, and one—Two Roads Tavern—was outside. Luckily, Sunday was a beautiful day.

Picking out a favorite dish seemed an impossible task. Nick and Jan Dadario, from Waynesboro, Pennsylvania heard about at the Cook Off when they were here during Hurricane Matthew and felt they needed a better memory.

Nick’s take on the dishes seems to sum up what it was like. “I haven’t found anything I haven’t liked,” he said. “I just wanted to vote for everything.”

The trek from Waynesboro started early in the morning. “We left at 5:00 (a.m.),” Nick said. “This is my wife’s 45th anniversary present for me.”

“It’s…like a road trip. When we were first married we took road trips,” Jan adds. “We’re kind of like reliving that.”

Nick was right about the shrimp dishes—some of the highlights included the Shrimp Arancini from Ocean Boulevard. It was like a giant fried risotto, mozzarella and Fontina cheese ball with shrimp in it. The The ginger and lime shrimp from Coastal Provisions was excellent.

Upstairs there was a wonderful puff pastry with shrimp in the middle of it from Cafe Lachine. Also upstairs the Beachside Bistro’s Pan Seared Shrimp over polenta with a smoked tomato sauce was truly memorable.

In short—it was all good, and very good.

The support from the community for the OBCDR has helped make the Shrimp Cook Off even more successful than the sale of 200 tickets. Kitty Hawk Kites, Nags Head Dolphin Watch, the Outer Banks Veterinary Hospital and Bill and Peggy Birkemeier all stepped forward. There were also in kind donations from Max Radio and Access Designs.

That support makes possible the work that the OBCDR is doing in Roanoke Sound to understand the local dolphin population. Relatively shallow, the sound is a favorite site for dolphin because of its proximity to the Atlantic Ocean and some other factors.

“There’s a lot of food in the sound and not a lot of predators,” Taylor explains.

With eight years of data gathered, Taylor feels the organization is beginning to get a handle on how many dolphin live in the sound and what future trends may be.

“We’re starting to get to where we can do population estimates from our data,” she said.