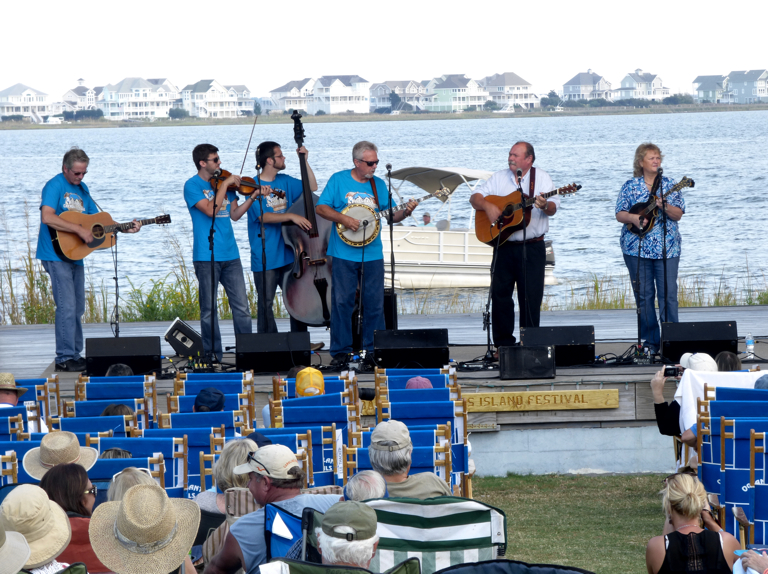 What a great day to kickoff the October Second Season. Lot’s to do this weekend and the weather couldn’t be better.

The 2nd Annual Outer Banks Blues Festival at Roanoke Island Festival Park in Manteo, actually started last night, but heart of it began today and runs into tomorrow with headliner Rhonda Vincent and the Rage making a return visit after last year’s triumph.

Today was a day of very traditional sounds with groups like Gentlemen of Bluegrass and  the James King Band filling the air with strong harmonies and great musicianship interspersed with good old fashioned gospel.

The Roys, who were at the Outer Jubilee at the end of August, were the one group pushing the limits of what bluegrass can do performing today, but it was a great day with amazing music capped off with “BoomGrass”–fireworks over the Roanoke Sound to the music of the Grascals.

Tomorrow brings the cutting edge bluegrass sounds of Nu-Blu at 2:30 with Rhonda Vincent and the Rage tearing it up in the evening. If there is such a thing as a bluegrass band rocking out, this is it.

There’s more than music this weekend. The Annual Outer Banks Charity Classic Tennis Tournament was in full swing today at WestSide Athletic Club in Powells Point. Semi-finals and finals are tomorrow at Duck Woods. Great tennis for a great cause; it’s all a fund raiser for Dare County Home and Hospice.

Next weekend looks like there’s even more happening. Check out the North Beach Sun Event Calendar for all the details.