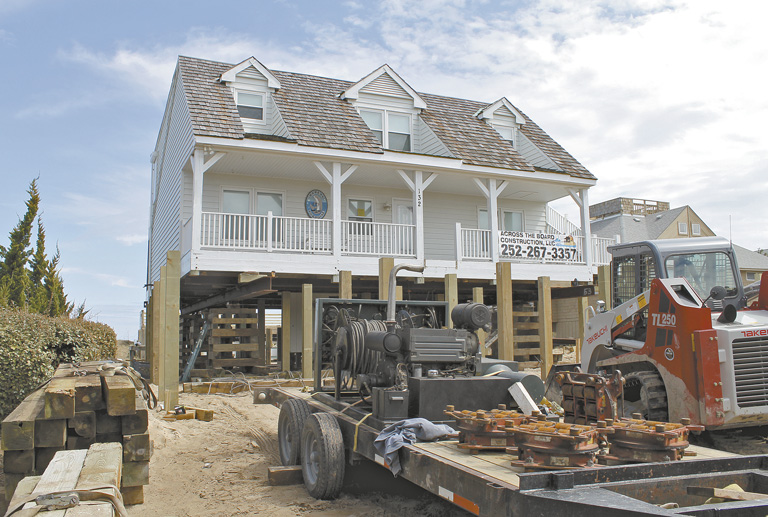 Hollerman house being moved back from the sea

With the passage of a 1% increase in county occupancy taxes to pay for shoreline mitigation efforts, Dare County has taken a significant step toward creating a county wide policy on how to preserve our coastline.

Although the enabling resolution specifically states the revenue will be used for beach nourishment,  replenishing the sand on our beaches is an important, and perhaps the primary, tool in the effort to stabilize our coastline, it is not the only means being used.

There is general agreement that nourishment alone is not enough to stabilize our beaches—which is why increasingly government officials are viewing the efforts as a mitigation process—an ongoing effort that includes a number of methods to minimize the potential for property damage, efforts that include zoning and building requirements and storm outflow systems.

A byproduct of beach nourishment is an improved beach, but the reason to go through the process is to preserve property and limit flood and storm damage. Nags Head’s experience after Hurricane Sandy shows that it works and works well; Kitty Hawk’s experience in the same storm demonstrated what can happen if inadequate measures to protect property have been taken.

To date, Kill Devil Hills, Duck and Kitty Hawk have begun the process of including beach nourishment in their mitigation plans. Kill Devil Hills is the farthest along, although all three towns have been in consultation with engineers.

They moved Laura Holleman’s house back from the brink in March. The beach that had once extended 100’ in front of her home had ceased to exist, and Hurricane Sandy crushed any hope of salvaging her Duck home without moving it.

Forgotten in the debate about beach nourishment or shoreline mitigation or whatever phrase is used to describe efforts to stabilize our coast, is the very real human cost of inaction. We enter into endless debates centering on the minutiae of tax policy, who should pay and why, and even if any of this is an effective means of stopping the ocean’s encroachment. And as Nero fiddles, Rome burns…

“Does anybody actually understand this is my home?” That was one of the last things Laura said to me in our interview.

Laura comes across as a self-confident, well-spoken, intelligent and aware person. Her question did not strike me as self-pity or whining—rather a very real question posed in the middle of a debate about policy, funding and science. Do any of the people making these decisions understand the human cost of metaphorically twiddling their thumbs? Or posed another way, what would their reaction be if they purchased a house secure in the knowledge that the ocean was a safe distance away, only to find that in 10 years the waters were at their doorstep?

The Netherlands wouldn’t exist without dykes, we build levees to channel rivers, dams to hold back rivers and terrace mountainsides to create farmland. Why shouldn’t we nourish our beaches to preserve our shoreline?

Allowing the Atlantic Ocean to reclaim the beach will not recreate some imagined state of balance. Laura points out, with considerable justification, the home that falls into the sea carries with it the detritus of civilization, complete with septic tanks, aluminum siding and 8×8 beams. “Letting my house fall into the ocean does not return the beach to its natural state,” she says.

Questions about the effectiveness of beach nourishment can be answered in real time. Look no farther than Nags Head who finished their beach nourishment project last summer. Municipal damage from Hurricane Isabel in 2003 was almost $250,000; 2012 damage from Sandy consisted of one street sign.

There is movement to stabilize Outer Banks beaches. Duck and Kill Devil Hills are wading through the complexities of studies that were commissioned to determine if it would suit their towns, and Kitty Hawk has begun examining how the town would pay for shoreline stabilization (their term) if they decide to move forward with it.

It’s not as though nothing is happening—but when the loss of a dream is the cost of hesitation, it’s difficult to wait. 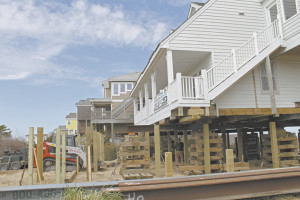 Richard Bell, Owner and Managing Member of Across the Board Construction, has been involved in a number of projects over the years but moving the Holleman house was the first time he has been involved from picking the house up to putting it back down.

“I found it extraordinarily interesting,” Bell says. “It struck me that we actually got it right.”

Although moving the house is the most visible and most exciting part of the process, it is just one step in a complex series—a dance that begins with disconnecting everything… power, septic, water.

Then pilings are set precisely at the height and distance of the existing pilings, the house is cut off from the old ones, and it is moved—very slowly, one row of pilings at a time.

“They (Abode House Movers) were professionals who really know what they were doing. They made it look easy. That was around 100 tons of house they moved.”

After moving it, though, the hard part comes. “Deconstructing the house and then reconstructing it is really complex,” Bell says. “That’s the difficult part.”