Photo and Story by Kip Tabb – 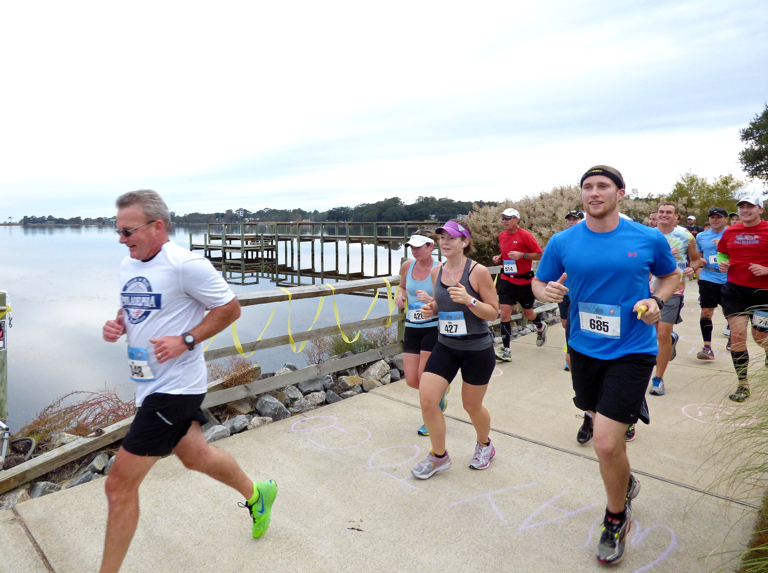 The weather for the 9th Annual Towne Bank Outer Banks Annual Marathon was about as good as it could have been. Sunday, especially was a good day for long distance runners—mostly cloudy with temperatures staying below 60.

The Marathon is a beautiful run—one of the most picturesque anywhere. That’s not hometown boosterism; accolades from runners from almost every state and province in Canada attest to that, as well as numerous articles in national publications.

The competition for first place was much tighter in the women’s category with Ginny Cronley from Greensboro finishing at 3:00:17 a little bit less than a minute in front of second place runner Kaatherine Price of Beaufort.

The top Outer Banks finders was Jessica Jennings from Kitty Hawk who came in at a very respectable 3:08:55.

The Marathon is just one of a whole group of races for the weekend and the outgrowth of a one day  event that began in 2006.

Sunday is the big day, of course, starting with the Southern Fried Half Marathon that is the last half of the Marathon course.

Saturday, though, is also filled with races—there’s a 5K and a 10K, both starting at First Flight High School and entering Nags Head Woods. There is also a one mile fun run and a diaper dash.

What Outer Banks Sporting Events (OBSE) realized when they took on the task of organizing the Marathon Weekend was that this is a family event. It’s about more than just the runners—families come to cheer Mom, Dad and the kids along.

From the beginning the Outer Banks Marathon Weekend had three goals—introduce a wide spectrum of people to the Outer Banks, generate income in the shoulder season and be a funding source for Outer Banks non profits.

It has succeeded remarkably well in all three phases.

Originally organized by the Dare Education Foundation (DEF), it became quickly apparent that the event had outstripped the ability of the DEF to host it, and the OBSE was formed as the organizing body.

OBSE continues to fund the DEF mission as well as contribute to the Outer Banks Relief Foundation.

Last year the OBSE donated $140,000 to both organizations. According to Executive Director Lynda Wood OBSE is on track to turn the same amount over to the two organizations agin this year.

In addition to the Towne Bank Outer Banks Marathon, the OBSE also organizes the Flying Tiger Half Marathon in April, Storm the Beach in June and the Outer Banks SAGA Triathlon in September.