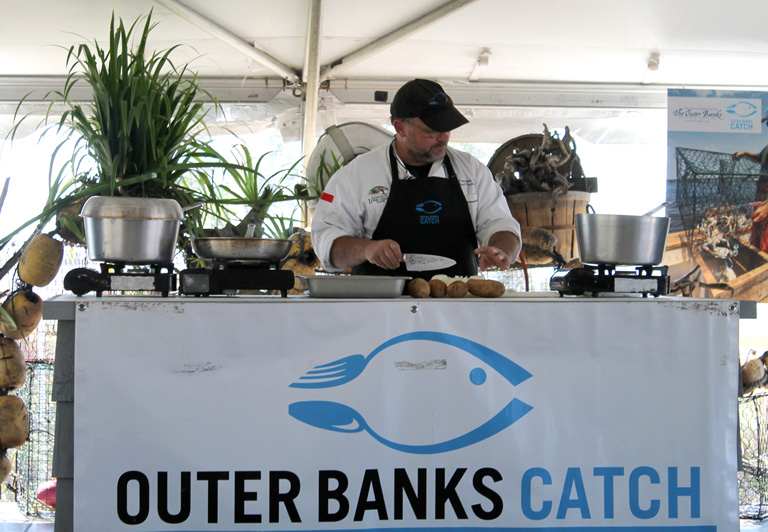 Maybe it’s the weather, maybe there’s something in the water . . . maybe we’re finally getting it right, but I have been on the Outer Banks almost 20 years, and I have never seen an October so filled with events and so packed with people.

I just got back from the 1st Annual Outer Banks Seafood Fest and it was a spectacularly successful day.

There were lots of vendors, great food, fantastic music, a great setting—all of that goes into why this was such an amazing happening. Yet for me what made it so successful was the organizers in celebrating the Outer Banks heritage of commercial fishing, never lost sight that at its core there is a heritage of family traditions.

This day was a day for families to celebrate all that’s best about life. There were families and children everywhere. From the father with two stuffed toys stuck in his pocket, carrying his daughter around as she is gesturing wildly at everything, to the Kid’s Zone complete with live entertainment, clowns, pirates and everything else a child needs to have a good time.

Families were not necessary to have a good time, though. I didn’t bring my daughter, and I really enjoyed myself. 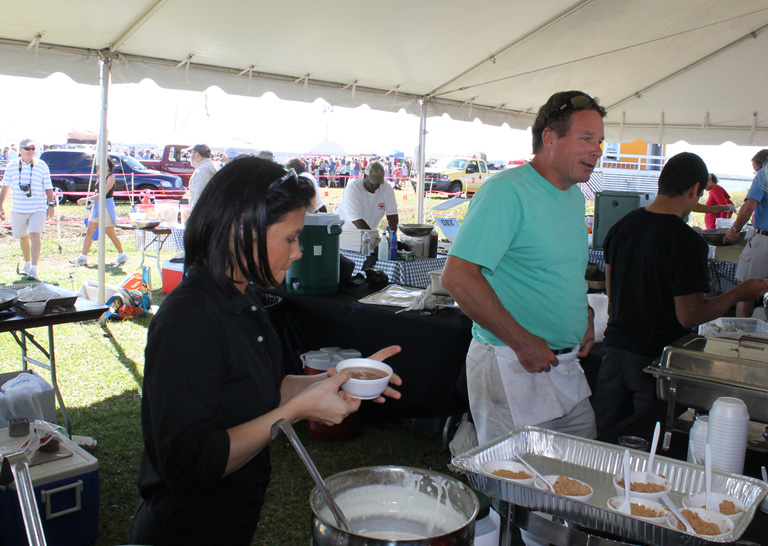 The food was as good as anything I’ve ever had. I had the smoked tuna dip from Chili Peppers, a fish taco that a friend gave me—I think that was from Mulligans, and she crab soup and crabcake from I Got Your Crabs. Fresh, innovative, it all had a little kick to it, but great stuff.

And I also had a sample of a Wanchese Chowder that Basnight Lone Cedar Restaurant executive chef Bud Gruninger prepared in a cooking demo in the Fresh Catch tent. That was very good, too.

There was music going all day—and the groups were wonderful. The stage was set up right in front of Roanoke Sound and it was a visually spectacular setting. Also, the sound was just right—loud enough to hear the musicians, but not so loud that it drowned out conversation.

There were long lines at the food vendors booths. I suspect that was largely a result of a few thousand more people showing up than were expected. I don’t know what the original projections were, but at one point someone announced that a tentative attendance figure was 8000—whether or not that figure is accurate is hard to say, but there can be little doubt that attendance far exceeded expectations.

There were a few glitches. Probably the most significant was getting the food tickets into the hands of the crowd. There was a little bit of confusion, it was a little time consuming, but certainly something that can be fixed.

Although the event site has been used for smaller gatherings, this is the first time anything this large has been attempted at the location. Originally purchased for use by Dare County and the Visitor’s Bureau as a place to hold large events, the success of the Seafood Festival would seem to demonstrate how effective it can be.

There are a lot of kudos that have to go around for the success of the festival. Certainly the county’s help was important, equally as important—if not more so—was the initial work the Chamber of Commerce did in starting the process and the follow up work the Visitor’s Bureau did in organizing and promoting the event. Additionally, there were a number of people on the Festival Committee who worked long and hard hours to bring this off and they deserve a resounding thank you as well.