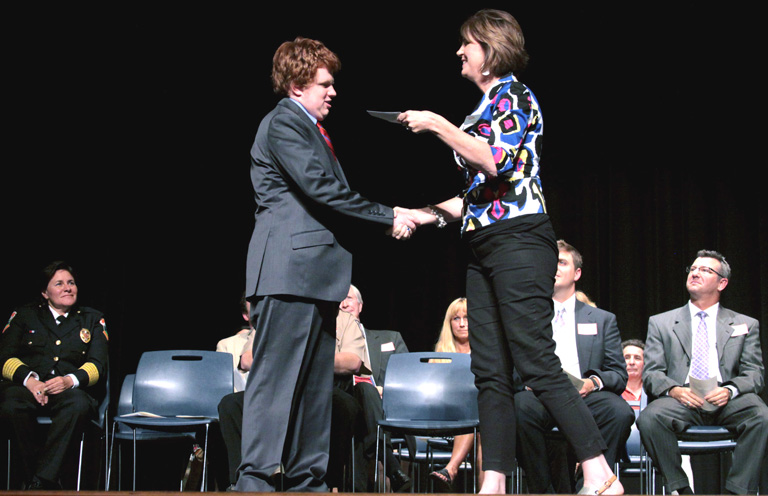 Zack Owen, valedictorian of the First Flight High School Class of 2013 and recipient of the prestigious Milton A. Jewell Scholarship from the Outer Banks Community Foundation. Photo Jordan Hennessy

Zack Owen, who has an infectious sense of humor, won’t allow the fact that he was born with Cerebral Palsy to define who he is or what he can accomplish.

Ask Zack Owen what he is looking forward to in the future, and he is quick to respond. “I’m going to be a Ramblin’ Wreck from Georgia Tech!”

This year’s First Flight High School valedictorian, Zack is the winner of the Outer Banks Community Foundation’s prestigious Milton A. Jewell Scholarship. The $5,000 award is renewable if the recipient maintains a 3.0 grade point average. That should present no problem for Zack, who impressed the Community Foundation’s scholarship committee with a 4.78 GPA and near-perfect SAT score of 2190.

“I’m very happy about receiving this scholarship,” said Zack. “It is a lot of money, and school is expensive.”

The Milton A. Jewell Scholarship was created by bequest by the late Ruth Medgyes of Southern Shores in honor of her grandfather, Milton Jewell. Zack also has a special bond with his grandfather, which made this particular scholarship even more meaningful to the 18-year-old.

According to his mother, Janet Owen, Zack believes his grandfather is “the best person in the whole world.”

Zack’s plans are to pursue a degree in aerospace engineering, and he chose Georgia Tech because of its prestige in that field. “It is a fine school. I love the atmosphere there,” said Zack. “And I love Atlanta.”

The only child of Janet Owen, he is a native of Dare County who enjoys reading and playing video games in his spare time.

Zack, who has an infectious sense of humor, won’t allow the fact that he was born with Cerebral Palsy to define who he is or what he can accomplish.

Active in the Boy Scouts throughout his high school career, Zack was inspired to become an Eagle Scout by his late father, Bill Owen, who was his Scout Master. Zack earned the rank of Eagle Scout as a sophomore by building a protective framing around a window in Kitty Hawk United Methodist Church.

“My pastor suggested that project because the window was near a basketball hoop,” said Zack.

While at First Flight, he has been a member of the French Club for four years, the Drama Club, PhytoFinders, Leo Club, and the National Honor Society.

“Zack’s academic achievements just blew our shoes and socks off,” said Lorelei Costa, the Community Foundation’s executive director. “One of his teachers told our scholarship committee that Zack is the ‘type of individual who will discover a new planet’, and given his intellect and his ambitions as a rocket scientist, I think he may just do that.”

Zack was not the only Milton Jewell winner this year. This year the Community Foundation broke tradition and announced two Milton A. Jewell Scholarships. The second scholar, Kermit Farrow, is valedictorian of his graduating class at Cape Hatteras Secondary School.

Both Milton Jewell winners epitomize the diversity of talents, culture, and life styles on the Outer Banks. While Zack wants to use his interest in engineering to explore the sky, Kermit wants to pursue a degree in ocean engineering at North Carolina State University.

A member of the National Honor Society and student government, he also is a firefighter with the Frisco Volunteer Fire Department and a first responder with Hatteras Island Rescue. “I’ve belonged to the departments for almost two years,” said Kermit. “I joined when I was 16.”

He sometimes commercial fishes with his family, which he notes is one of the oldest families living on the island. He also works at Real Water Sports selling surf boards and kite boards.

He is the son of Kermit and Angela Farrow, and the grandson of Ervin and Audry Farrow, all of Hatteras Island.