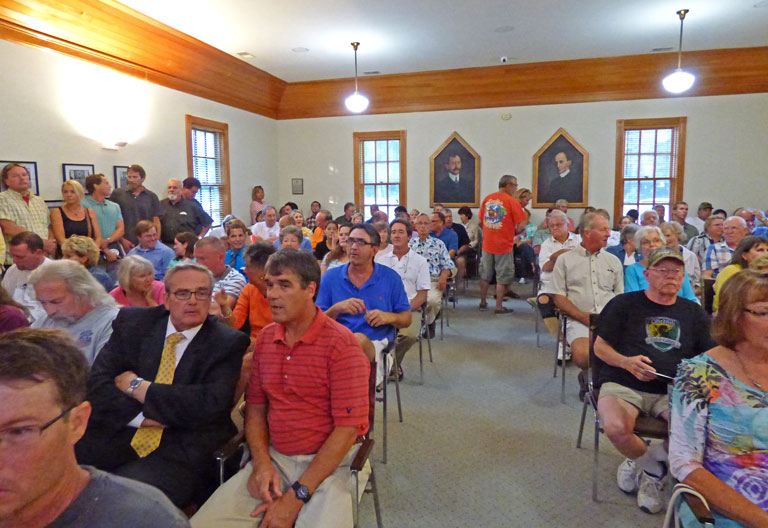 A more than SRO crowd gathered at Kitty Hawk Town Hall to learn about town and county plans for beach nourishment last night.

Presenting to a more than standing room only gathering at the Kitty Hawk Town Hall, the Kitty Hawk town council outlined plans for beach nourishment last night. Included in the presentation were projected costs and preliminary revenue plans. Plans were also presented outlining the need to mitigate storm damage to the town.

Mayor Pro Tem Gary Perry began the evening with a comprehensive review of the history of the Outer Banks shoreline and the impact of the retreat of the beach. His presentation included personal anecdotes with relevant fact. 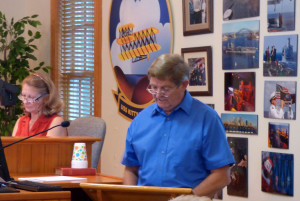 Recalling his service in the Coast Guard in the 1960s, he described an assignment to drive exclusively on the beach from Kitty Hawk to Carova.  “The trip took all day, through a high and low tide cycle,” Perry said. “Today, there is insufficient beach in places like Kitty Hawk to make that trip without considering where I would be during high tide.”

What Perry described was a steadily encroaching ocean that was creating an increasingly heavy economic and personal burden on the town. Noting that funds from FEMA are becoming less reliable and that the agency is emphasizing preventative measures, he outlined a case for taking action.

In addition to the immediate financial and personal burden, Perry pointed to the price tag associated with operating the town’s equipment in salt water. “The cost to the taxpayer in premature repair or replacement of capital equipment is enormous,” he said.

County Manager, Bobby Outten, took the podium after Perry to present Dare County’s position. He noted that if the roads in Kitty Hawk are flooded, it impacts the entire county. “If you have to come through Kitty Hawk, it is a major problem,” he said.

Recalling the problems created by Isabel and Sandy, Outten outlined a strong case for county involvement.

For a number of years the county has been collecting a dedicated tax that can only be used for nourishment projects. It was the use of those funds that helped Nags Head offset their costs, and as towns along the beach move forward with their projects, the county has become more active in working with them to develop a funding plan.

The county funds are to be used in conjunction with municipal revenues, and every funding scenario does include a property tax increase. Outten urged the town to coordinate their efforts with Kill Devil Hills and Duck, indicating that preliminary figures show a 17% savings if all nourishment projects are coordinated. 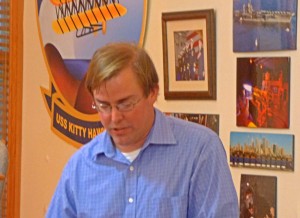 Although no decision has been made on property tax assessments, municipal districts that would create a higher tax rate closer to the ocean have been discussed.

There was considerable audience participation, with Donnie King of Ocean Boulevard speaking first. In a well-reasoned and impassioned plea for action, King presented the underlying concern.

“The case for doing nothing is a frightening unknown,” he said.

Almost every other speaker was adamant in support of nourishment, in almost every case saying that additional taxes were a small price to pay for protection of life and property.

Ray Midgett, who has been opposing beach nourishment for some time, spoke against the proposal, questioning the cost analysis of the county and raising doubts about the amount of sand tentatively projected for Kitty Hawk beaches.