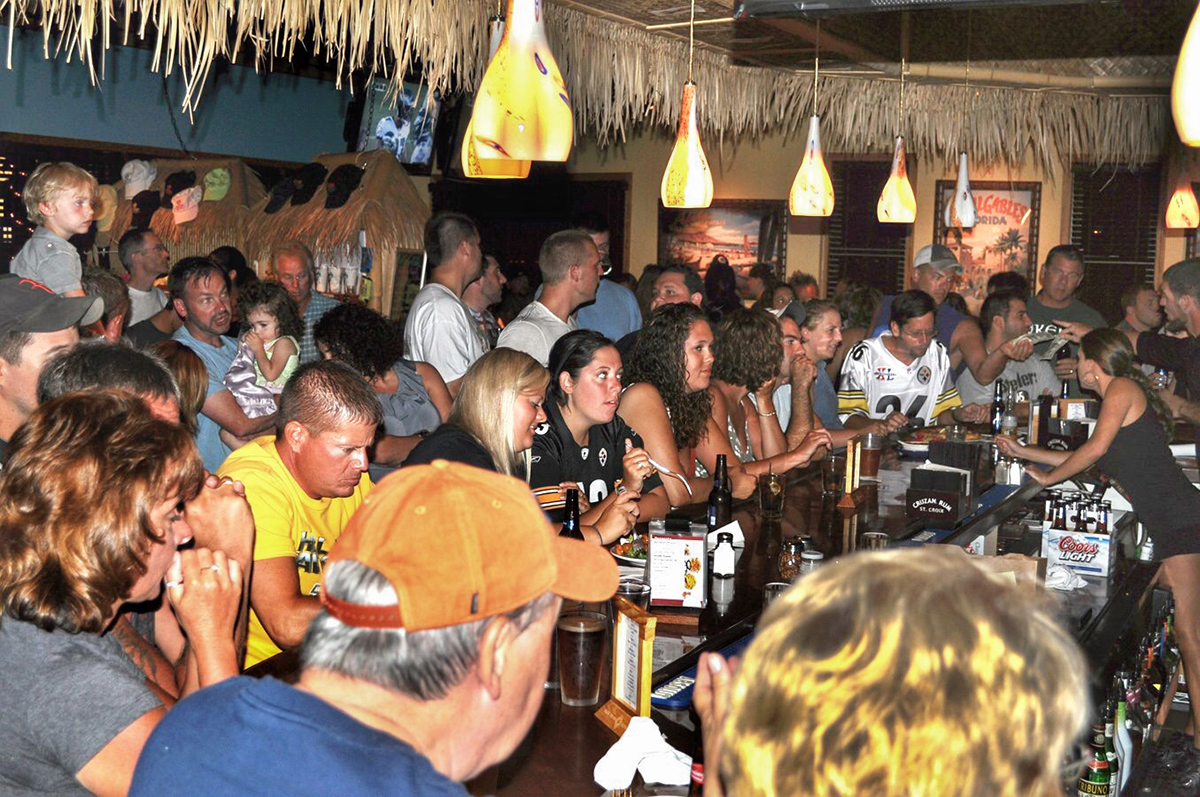 Steeler fans crowd the bar at Barefoot Bernie’s during the off season. Photo courtesy of Chris Vlahos.

There was once a time when many businesses on the Outer Banks closed up shop for the winter. Come January, the blinds were pulled and the doors locked. Owners would travel, come back in the spring and be ready for the next tourist season.

Those days, however, are gone. While many businesses still reduce hours during the off season, closing down during the winter just doesn’t happen very much anymore.

With a thriving year-round population, a steady stream of visitors every month of the year and plenty of events and festivals held during the shoulder seasons, businesses are staying open longer or not closing at all.

And many offer local specials that keep customers coming in all year long.

“Part of the reason we are seeing this is because of the strength of the shoulder season,” says Outer Banks Chamber of Commerce Executive Director Karen Brown. “Businesses stay busy right through Christmas. For many businesses now, it just makes good financial sense to stay open at least a few days a week.”

John Kirchmier, owner of Bonzer Shack in Kill Devil Hills, says that staying open during the off season helps keep good employees and is also good for the community. “We need to be here for the community,” says the longtime restaurateur. “It’s important to us.”

Chris Vlahos, owner of Barefoot Bernie’s Tropical Grill & Bar in Kitty Hawk, remembers years ago when the winters on the Outer Banks were pretty quiet. His parents owned Kitty Hawk Pizza, which they opened back in 1983 at the same location Barefoot Bernie’s is now.

“I left for about 10 years and when I came back, the first couple of years still felt a little dismal, but then business picked up and we were hearing locals say they needed a place to go during the winter and were tired of driving around and wondering what was open.”

Every year since, Vlahos kept reducing the amount of time his restaurant was closed during the off season until finally, a few years ago, he didn’t close at all except for a few days to do a deep cleaning of the restaurant. “In a couple of days, we popped right back open.”

The owners of Outer Banks Brewing Station found themselves in the same boat a few years ago. “We used to close for five weeks, but during the last two years we’ve only closed on Tuesdays and Wednesdays from January 2 through March 1,” says co-owner Karen Loopman-Davis.

Loopman-Davis says the restaurant loves hosting community events in the off season such as painting parties, fundraisers and meetings.

“It gives us a chance to get to know one another again and since there’s no town center per se on the Outer Banks, it’s up to the community, sporting events and businesses to provide that unity,” she says, adding that the Outer Banks has done a wonderful job promoting itself with all the festivals and events.

The Bonzer Shack is the fourth restaurant Kirchmier has owned and operated on the Outer Banks since taking it over four years ago. With good employees, Kirchmier knows he can keep it going every month of the year—even when he’s not here.

Bill Golden, owner of Dare Devil’s Pizzeria, right next door to the Bonzer Shack on N.C. 12, echoes Kirchmier. He has been keeping the pizza pub open five to six nights a week for the past six or so years. He has enough business to warrant it and likes to keep his employees active over the winter.

Also during the off season, many local restaurants offer regular specials that are hard to resist. Beginning in October, Vlahos offers nightly specials such as sushi, burger, tapas and oyster nights.

Such nights encourage people to get out and about and either enjoy a regular menu item or something a little different.

Slice Pizzeria is another local restaurant that runs off season daily specials beginning in mid-September and running through May. Its popular $1 slices on Mondays and Thankful Thursdays (when they donate $2 to a local charity for every 16-inch pizza sold) are hugely popular among locals.

Staying open year round also allows employers to retain quality employees. Brown says with changes in the unemployment laws three years ago, seasonal employees now need year round work. Prior to the changes, employees on unemployment could receive 26 weeks of unemployment and $500 to $600 a week. Now, the initial period is for 12 weeks and a maximum of $300 a week.

These days there are plenty of reasons businesses keep their doors open every month of the year, and like Kirchmier says, that’s good for everyone.