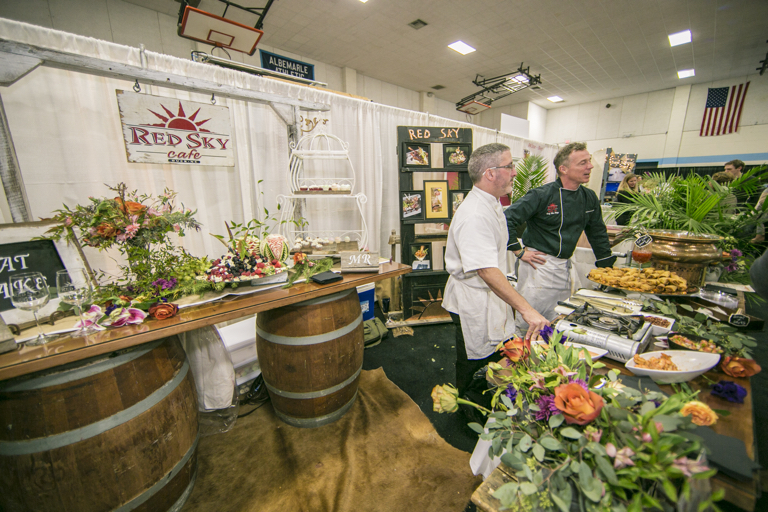 Here is the important information for brides, grooms and their families planning on attending the 2016 Outer Banks Wedding Expo: bring a good appetite, comfortable walking shoes and be ready to take a lot of notes.

The annual affair, held over Martin Luther King weekend, has become the signature event for the Outer Banks Wedding Association (OBWA) and for many couples the best introduction to the vendors who will be providing services at their wedding.

The event has grown over the years; for many years it was a one day affair, but steadily growing attendance and more Outer Banks wedding vendors created a need to go to two days. The event continues to grow, and the 2015 Expo seems to have been the best attended yet, although final number are not in yet.

However, even without final numbers, Kim Stetson, Executive Director of OBWA, noted that vendors who had used past years to judge how much to bring were coming up short. “A lot of vendors had to restock,” she said. “The show was the best first day in quite some time.”

Walking around the two venues—First Flight High School and First Flight Middle School— the range of services and number of businesses that it takes to support the many weddings and events occurring on the Outer Banks is striking.

Catering, of course, is a large part of the any marriage ceremony, which is why bringing a good appetite to the event is so important. The caterers are putting their best food out there for samples, and there is a lot of it to try—and it’s all good, although some certainly stood out. The crab bisque that Steamers was serving was wonderful; Will Thorp’s beef brisket from his High Cotton restaurant was juicy and tender; and with a full buffet line from which to choose, it was hard to say what was the best at Black Pelican. But after sampling more food than any one person should ever eat in two days, there is confidence that everything was quite tasty. 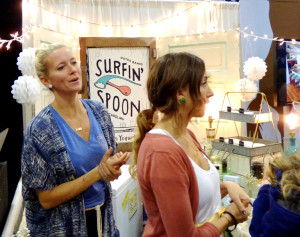 Whitney Hines, in blue, at the Surfin’ Spoon booth. Whitney and her husband, Jesse own the frozen yogurt shop that came to the Expo for the first time this year. Photo, Kip Tabb.

One of the interesting phenomena that seems to be occurring in conjunction with the growth of wedding locally, are the businesses providing services who would not have been involved in the past.

Surfin’ Spoon is a good example of that. The Nags Head frozen yogurt bar has been been very successful over the past three years since they opened. According to owner, Jesse Hines, friends who were working with weddings told him they thought there was an opportunity for him.

“I have lots of friends in the Wedding Association,” he said. “They told me I should bring the frozen yogurt there. We have a frozen yogurt bar now we can take to events now.”

It is the combination of range of services, professionalism of the vendors and proximity to major population centers that have contributed to the Outer Banks becoming a premier wedding destinations—not just on the East Coast, but nationwide. Confirmed figures are difficult to come by, but a conservative estimate puts the number of weddings between Carova and Ocracoke Island at over 3000 every year. And that number seems to be growing.

The consensus among vendors we spoke to, was that there was a different feel to the event this year, that wedding parties had more confidence in the economy and that was translating into more confirmed plans.

The sense that there is confidence going forward was on display when the giveaways at the end of the weekend were held. Featuring an Outer Banks honeymoon, 16 prize packages and a wedding, as the winners came to the stage and were asked about their wedding dates, a number of them were looking well into the following year.