OBX Wedding Expo Fun for All 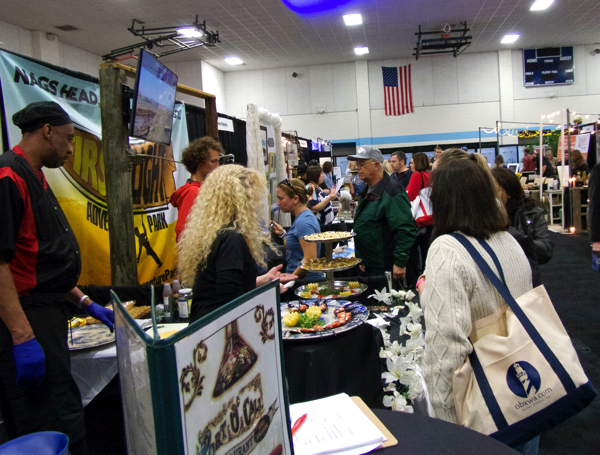 Checking out the the latest info on weddings at the 2016 Outer Banks Wedding Expo.

The transformation of the First Flight Middle and High School gyms into a showcase for Outer Banks wedding professionals is almost a work of art. Perhaps after 10 or 12 years the sense of wonder at seeing the Outer Banks Wedding Association convert the rooms into a new image would be gone, but there is something so wonderfully different in what has happened that the awe still lingers.

If that is the feeling that exists after so many shows, the feelings of couples planning their Outer Banks wedding as the enter into the Wedding Expo can only be imagined.

Walking down the aisles and talking to the vendors, there is an excitement and anticipation, especially on the first hour of the first day. The excitement remains throughout the two day event, but after an hour of learning the lay of the land the brides-to-be, their families and the groom are deep in conversation with coordinators, photographers and caterers.

The Expo can be a bit overwhelming; with over 200 exhibitors and a tentative count of more than 1100 tickets sold, the schools buzz with sound, color and light.

A family from Burlington, NC is sitting around the couches at the High School, taking a break and sorting through everything.

“What do you know about the photographers?” they ask.

“I’ve worked with some of them and know some by reputation, and there are some very, very good photographers on the Outer Banks,” they are told.

“How about this one (names deleted to avoid any hint of favoritism). Or this one? Or this one?”

“The first two I’ve worked with, the others I’ve seen their work and know their reputation is very good.” 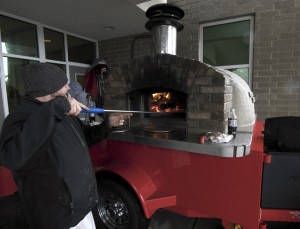 Making pizza at the Cosmos Pizza mobile oven, day two. The winter jacket was a necessity.

The family seems encouraged by the answers, perhaps feeling confident that whatever choice they make they’ll it will be a good one.

In some ways the 2016 Expo was a show of two different days, with beautiful weather on Saturday and howling winds, a driving rain and falling temperatures on Sunday.

Nowhere was that more apparent than in the work the guys from Cosmos Pizza did.

One of the new exhibitors this year, Cosmos Pizza has a mobile pizza over. The oven can only be set up outside, and Saturday went off without a hitch. Sunday was another story. The overhead tent gave no protection and the over and prep tables faced the brunt of the northeast winds.

They finally got the oven moved to a more protected spot under the FFHS awning, but it was still a cold miserable experience for Bryan—pizza chef, and his helpers Eric and Jay. Somehow they kept it going, though.

Most importantly, perhaps, the pizza was great.

One of the best parts of the show are the new toys that exhibitors bring out every year. 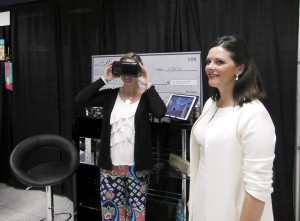 A 3D look at 108 Budleigh, Manteo. That’s Margaret Northrup home to help with the family marketing in white.

For best new toy, the award has to go to 108 Budleigh and their 3D goggles.

Owned by the Fearing family, 108 Budleigh is a wonderful event facility in downtown Manteo. What the goggle allow the user to do is step inside the facility and view everything from the interior . . . in three dimensions.

It’s a bit disconcerting but worth a look. As the the user approaches a wall, the entire focus shifts; spin around and the room spins. Fun, but also useful to understand what the facility has to offer, certainly one of the best innovations at the show.

An interesting observation from Doug Haber of Outer Banks Productions. He and his wife, Michelle, have been mainstays at the Expo for a number of years, and as he was going through addresses from a contest he was holding, he noticed there seemed to be more local addresses than in the past. 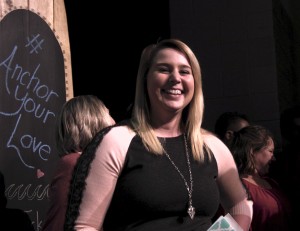 One report of a shift doesn’t indicate a trend, but when the winners were announced for the giveaways on Sunday afternoon, Outer Banks residents won two of the six packages: Theresa McCarthy took home the rehearsal dinner and Schuylar Overbey the elopement package. Both brides-to-be are from Kill Devil Hills.

On the other hand, three of the prizes went to visitors from Pennsylvania with Jamie Karpinski from Pittsburgh taking home the grand prize Dream Wedding.