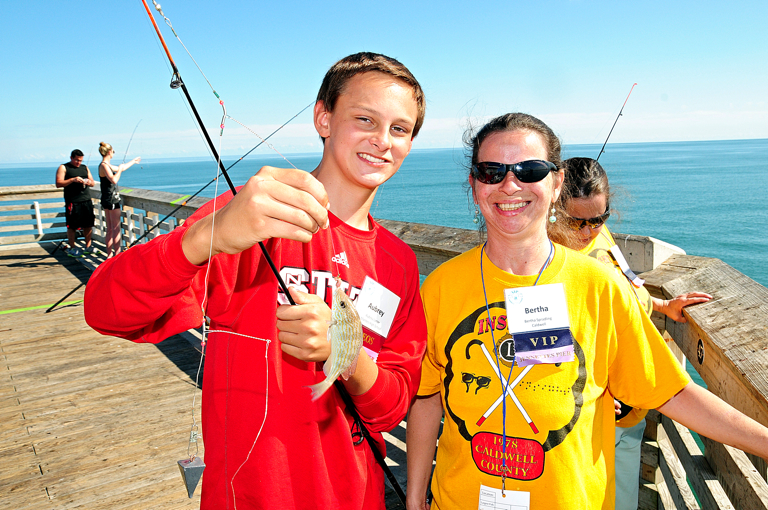 Bertha Spradling of Caldwell County shows off a fish she caught on the Jennettes Fishing Pier. She is being assisted by Aubrey Lanier, a Leo Club member from Manteo High School. Photo Michael H. Schwartz/Thin Blue Line Productions.

The 32nd Lion’s VIP (Visually Impaired Persons) Fishing Tournament got in two out of three days of spectacular weather last week. The tournament, by all account the largest in the world, was held Monday, Tuesday and Wednesday, October 20-22.  The fishing was great but the real story is what it means for everyone involved.

Between volunteers and the VIPs fishing there were over 800 participants involved and they came from so many places it’s not possible to list them all. 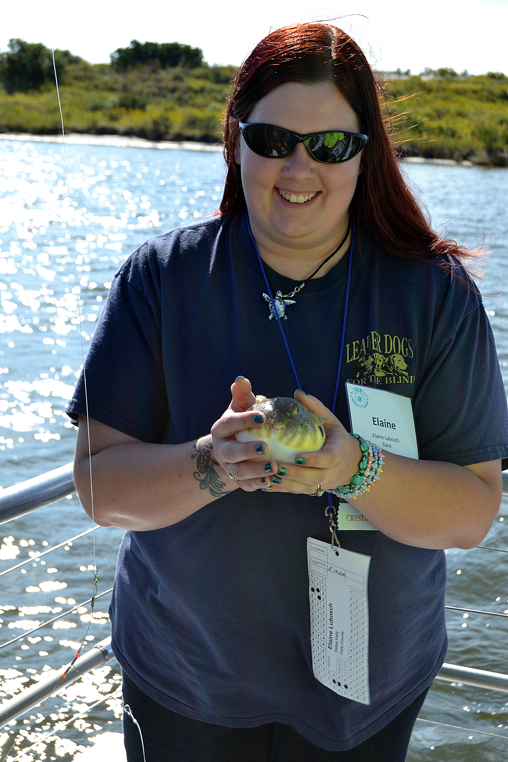 Putting on the event is a huge undertaking and it calls for cooperation among all the local Lions Clubs— Columbia, Currituck, First Flight, Lower Currituck, Manteo, Nags Head, Plymouth and Wanchese.

“We work all year log to raise the money to do it,” White said.

Although it takes a lot of money to put the tournament on, there is also a tremendous outpouring of community involvement as well. Four fishing piers, Avalon, Kitty Hawk, Jennette’s Pier and Nags Head Pier participated, as well as head boats to take competitors onto the open water.

Dom Branco from Rhode Island has been coming since 2008, and it is difficult to tell who has the better time on the water. “”Everybody caught a fish,” he said. “Seeing the expression on their faces, letting them feel it (the fish). It makes your day.”

“I love coming here and doing this,” Wayne Bryant from Wilson County said.

The VIPs also come away from the experience with a sense of the world around them that they may not have had before.

Elaine Lubosch from Kitty Hawk was on the head boat Crystal Dawn with her service dog, Ivy, who seemed take it all in stride. Elaine, however, had an amazing time.

“We were catching sea mullet, but my favorite fish was the puffer fish,” she said. “When they get mad, they blow up and it was so exciting.” Elaine placed third in the tournament with 25 points.

The tournament is held the Monday after Columbus Day every year. Next year’s event will October 19-21. For more information about how you can help, go to the N.C. Lions VIP Fishing Tournament webpage.