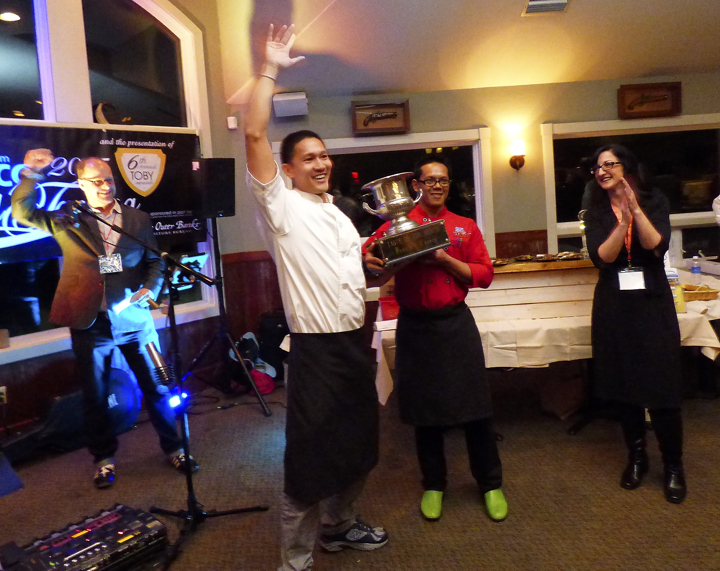 Chef Pok Choeichom (R) and his brother Art, of Pok’s Art, winner of the Taste of the Beach People’s Choice Award.

That was an amazing four days of food, laughter and creativity. The 2015 Outer Banks Taste of the Beach is now history, and this one was certainly one for the book.

The local version of the Taste of the Beach is as much a tour of the Outer Banks as it is a culinary masterpiece. Overheard at the Grand Tasting at Pamlico Jack’s on Sunday evening was the perfect summation to what truly sets this event apart.

“What I really like, is I get to talk to the chefs,” the woman said.

The schedule has become so full that getting to even a small part of what is offered is not possible, so the savvy solution is to go to as many of the major events as you can and fill in around the corners with some of the different classes and courses that are offered.

I managed to get to the Joe Lamb, Jr. BBQ and Wings Showdown on Friday, the Chowder Cook-off on Saturday and the Grand Tasting on Sunday evening and if I’m six pounds heavier now—well it was all in a good cause.

There were some great smaller events as well. Crystal Swain’s popsicle competition at Zen Pops was a blast with teams competing for the Blue Basket Trophy a la Chopped, the popular Food Network program. The judges were North Beach Sun food writer, Amanda McDanel and Chris Carroll, owner of Sweater Box Confections.

“Popsicle Making Chopped Style!” was not the only wonderfully different event. At the Outer Banks Olive Oil Company there was a fascinating look at how different olive oils and balsamic vinegar will change how food tastes. Trio and their “Aphrodisiac Wine and Beer Tasting” was fun with some great wine, beer and food preparations paired together.

The Blind Wine Tasting at Coastal Cravings in Duck was a marvelous way to meet people, try some wines that typically would not be tried and test your palate against what are often considered the elite wines.

The major events, though are what many people associate with the Taste of the Beach and they did not disappoint.

Clearly there was a Plan B in place when the rains came on Friday because the organizers of the BBQ & Wings Showdown had a tent up before the first guest showed up. Great food, music by Jonny Waters and Company. SaltyDawg from up in Currituck seemed to be the big winner, taking judges prize for pulled pork, wings and People’s Choice for Best BBQ. Pigman’s won for the third year in a row for their ribs—melt in your mouth, smoky, fatty goodness.

The Chowder Cook-off was packed as always. A cool day but sunny day, the chowder seemed perfect for the weather. A couple of personal favorites, having nothing to do with any thing else, except I like them. From Rob Robinson for Bad Bean and Baja Grill, the charred tomato with herb cream was a different and fantastic. Also the sherry backed chowder from Metropolis really worked for me.

The big sendoff event is the Grand Tasting on Sunday night and this year’s event really brought out the best. The winners were the same ones I would have picked—Judges Choice was Coastal Provision’s Bodie Island oysters with ginger—a local oyster with a subtle saltiness set off just right by a hint of ginger.

Chef Pok Choeichom from Pok’s Art took home the People’s Choice award for his ginger seared ahi tuna. Superbly balanced flavors and a truly deserving award and a perfect finale to a four day food adventure on the Outer Banks.