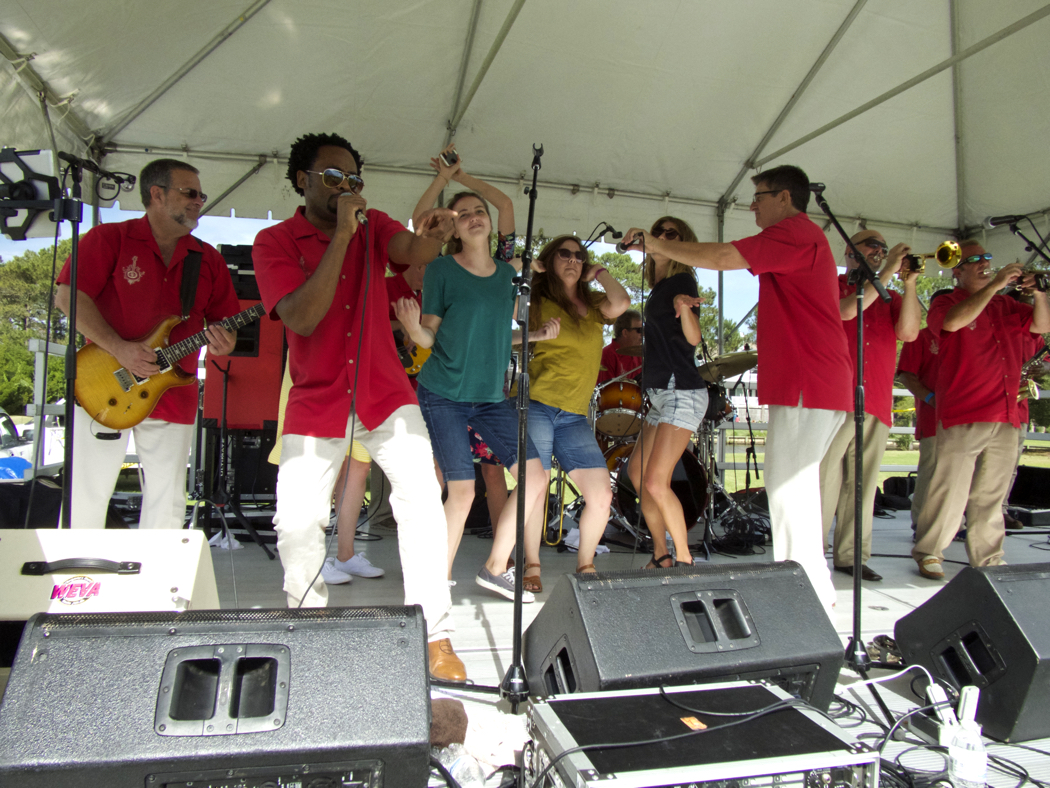 The Outer Banks summer season kicked off with in style this weekend with beach music and more beach music. It is, after all, the summer beach season.

Sunday was a near perfect day up in Corolla with the Memorial Day Beach Blast being a—well, blast. Monday the rains came but there was still some great music and a great time at the Shallowbag Shag Beach Music Festival at Roanoke Island Festival Park. 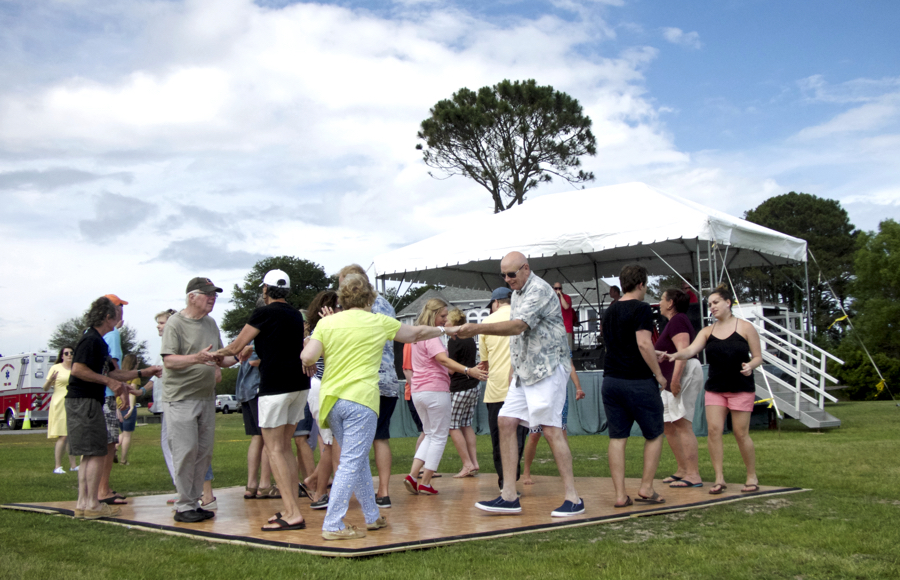 Up and dancing as the Blackwater Rhythm & Blues Band performs.

If there is a better way to kick off the summer season than sitting on a beach chair on the lawn at the Whalehead Club, sipping wine, listening to some great beach music with a perfect breeze off the Currituck Sound . . . well, it would be hard to imagine.

What made the Whalehead Club Beach Blast so much fun was that it was more than just music, although that was at the heart of the summer celebration. There were lots and lots of things for kids to do; there was a corn hole tournament; and there were local groups on hand selling hamburgers, hotdogs and fried chicken for various causes. Sanctuary Vineyards was on hand to serve wine and there was also beer available.

Put it all together and it becomes a wonderful reminder of how special summer on the Outer Banks is.

Of course the music is at the heart of the celebration and the music did not disappoint.
The day started with local band Aquarium on stage. With Gary Rader’s clear tenor and Matt Hoggard’s lead guitar work and Michael Sheehan on djembe giving a very different rhythm sound, it was a great way to start the day.

Blackwater Rhythm & Blues Band put on a great show with some great music. A full rich sound that included a horn section, sax and great vocals, they put great spin on the the classic sounds of the 1950s and 60s.

As good as they were on the classics, they really seemed to hit their stride when they broke out the Bruno Mars hit “Uptown Funk”. A couple of kids got up on stage and sang with them—that appeared to be random because when asked where they were from, it was everywhere from Pennsylvania to a local girl.

People were up and dancing; a line dance formed. A great show and a great time . . . best evidence of how good it was—when 5:00 o’clock came, it was a shock. 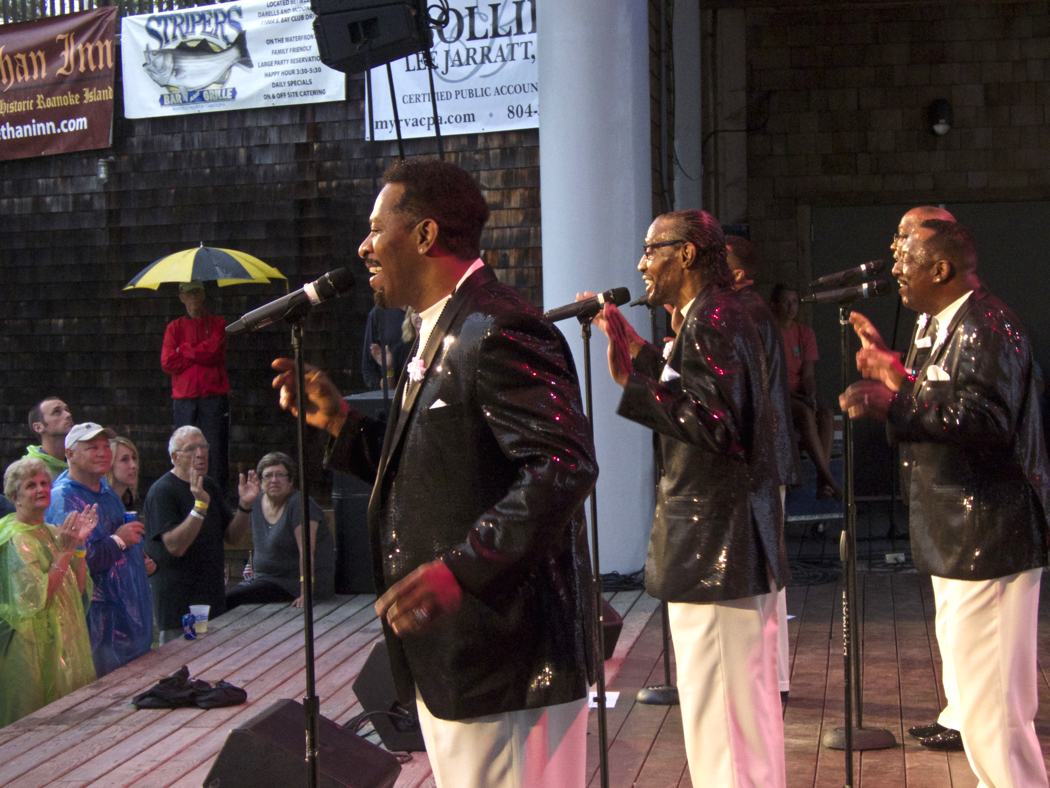 And then the rains came.

A real shame, too, because Cory Hemilright had really put together a great lineup for the festival.

The music still happened—but what would probably have been a few thousand people attending was more like a few hundred.

I admit I wasn’t as hearty as some of the folks who went—I waited until 4:00 hoping the rains would pass, so I got there just as the Tams were finishing up. Note to self—next time the Tams are playing, make a point of being there regardless of weather. The little bit I heard was outstanding.

Jim Quick and Coastline put on a great show. Jim is a bundle of energy on stage—great vocals—he even broke out a trumpet once or twice.

As impressive and great to hear and watch as Jim was, the band was every bit as good. Glen Tippet on keyboard and sax was amazing, at one point playing some backup on sax with one hand and playing chords on keyboard with the other.

Casey Meyers on guitar is clean, the bass playing of Albert Rogers is always right where it’s supposed to be and Cameron Dudley on drums does a really nice job on creating interesting rhythm patterns.

The voices are still silky smooth, the harmonies so beautiful it makes you want to weep at time and the show is marvelous.

Evans, the consummate showman, truly seemed to love being on stage. If the rains bothered him, or the size of the crowd was a problem, he never let it show. The opposite may have been the case—it seemed sometimes that he was thriving on a smaller, more intimate audience even if the setting wasn’t idea.

The play list definitely consists of hits from the Motown era—a couple of Four Tops tunes, but mostly Temptations. They really seemed to hit their stride with “Papa Was a Rolling Stone,” a song that features remarkably difficult harmonies giving voice to a searing social critique.

The band touring with them does need a special shout out—tight, on point, and very true to the original Temptations sound.