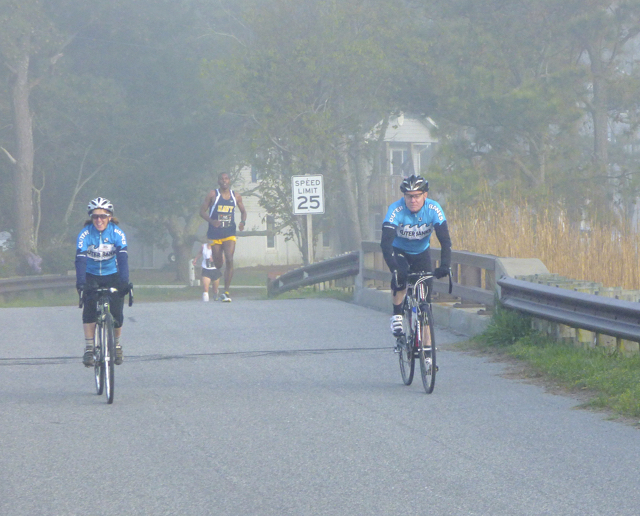 Coming over the Moor Shore Road bridge in Kitty Hawk with race winner Will Christian in the lead.

With the Flying Pirate Half Marathon Weekend this past Saturday and Sunday and the 13th Annual Outer Banks Bike Week this week the Outer Banks has a bit of the summer time feel to it in April.

It’s not as go, go, go as the summer, but with the music of Harleys resonating across the Outer Banks, some great weather and visitors from just about every state, homes are rented, stores and restaurants have customers and the roads are filled with out of town license plates.

A beautiful course, it traces the first half of the marathon route through the maritime forests of Kitty Hawk Woods and Nags Head Woods, runs parallel to Kitty Hawk Bay and loops around the Wright Brothers Memorial. With near perfect conditions—light fog at the 7:00 a.m. start giving way to broken clouds later—the runners set a good pace with Will Christian of Norfolk, Virginia winning with a 1:10.25 time.

The final numbers aren’t in yet, but the early indications are that with almost 1700 finishers, this may have been the most successful Flying Pirate Half Marathon yet. 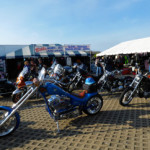 The combination of Motorcycle Week and the running event has an effect on the businesses of the Outer Banks, according to Jodie Herman, marketing coordinator for Joe Lamb, Jr. & Associates.
“We have regular people who come back (and stay with us) all the time,” she said. “We are a sponsor for the Flying Pirate Half Marathon—and all the OBSE events. There are people coming for the Flying Pirate from all over the country.”

There was some rain late day Sunday and into Monday morning, but the rest of the week looks perfect for Bike Week. Sponsored by Outer Banks Harley Davidson, the event is actually eight days—it started last Saturday and ends the following Sunday.

Along the way there are poker runs, a lot of live music, vendors from all over setting up shop and some great rides scheduled all up and down the Outer Banks.

The next event for OBSE is Storm the Beach on June 14 at Jennette’s Pier. Storm the Beach is designed to be a challenge. “Run, crawl, carry, and endure the challenging and fun sand filled course . . .” is the description.