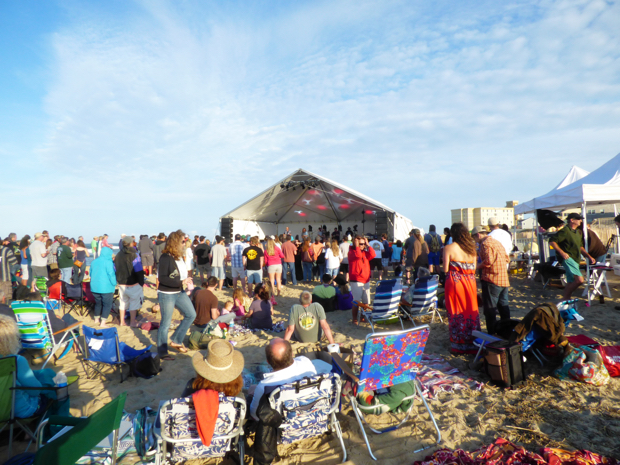 Greensky Bluegrass performing on the beach at Jennette’s Pier.

The first Soundside Live was like a gift to the Outer Banks. Held Thursday on the beach at Jennette’s Pier, it was originally scheduled for the Outer Banks Event Site on Roanoke Sound in Nags Head, but the harsh winter weather slowed construction and the site wasn’t ready in time.

This may have been the best second choice ever. The combination of a beautiful setting, great weather and fantastic music created a perfect moment in time to be remembered.

The music itself would have been enough to make this an event worth putting in a scrap book. Roadkill Ghost Choir led off and with their haunting yet hard rock sound, they recall the complex rock compositions of the 1970s.

Greensky Bluegrass is—yes—a bluegrass band, but with a real twist. Classic bluegrass instruments . . . mandolin, guitar, banjo, standup bass . . . but they attack their songs with an almost rock ’n’ roll fervor, pushing rhythms that take their sound out of the traditional.

And all that music set against the spectacular backdrop of crashing waves, kiteboarders skirting the shore, bright sunshine and a northeast breeze that never quite cooled things down.

A characteristic of outdoor concerts on the Outer Banks is how family friendly they are; Soundside Live was no exception. The age range went from an infant in a crib to a couple who are in their 80s. As the bands performed some of the audience crowded the stage, others danced and a lot of them simply sat back in their beach chairs, their faces tilted to the sun, basking in the afternoon warmth and music.

Sponsored by the Outer Banks Visitors Bureau in conjunction with National Tourism Week, OBVB Executive Director Lee Nettles summed up the atmosphere and dress code in his remarks.
“In my job I get to introduce a lot of things,” he said. “This is the first time I’ve ever done it in bare feet.”