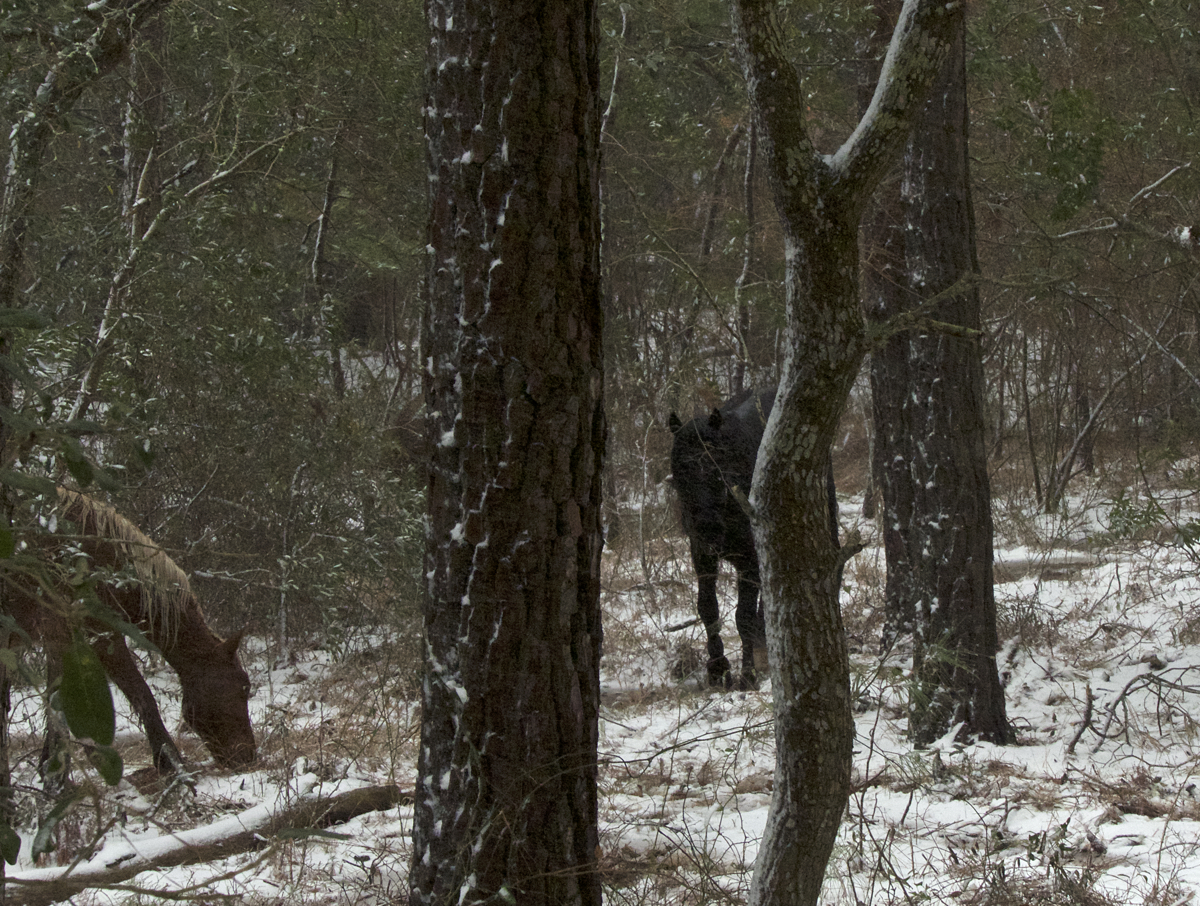 Horses graze in the winter storm at the Currituck Banks Estuarine Reserve. All photos by Kip Tabb.

The first flakes of snow don’t appear until three or four miles north of Duck. Before those earliest floating white pieces of frozen water, the drive north from Kitty Hawk is a dreary ride through the heart of the northern Outer Banks.

The hard rain from earlier in the day has given way to a series of light rain showers driven by gale force winds coming directly off the Atlantic Ocean. The high temperature of 39 degrees happened some time around 8:00 a.m. and temperatures have been falling steadily ever since.

Driving through Southern Shores and Duck the world seems to have taken on a monochrome hue where the dominant shade is the steel gray of the clouds.

The first evidence of snow doesn’t alter the landscape, but that changes quickly farther north. What’s falling from the sky is partly snow, but there seems to be some sleet or freezing rain…or just plain rain mixed in.

The evidence of the snow line is starting to appear; small patches of white are clustered around the base of plants. It’s an icy looking mix, but there’s no doubt that it’s evidence of a winter storm.

By Corolla Village the world has been transformed. The snow isn’t deep, but it completely covers the ground. The road is passable, although (especially on the curves), there’s a slushy mix on the surface.

The boardwalk at the Currituck Banks Estuarine Reserve is one of the most beautiful nature walks on the Outer Banks. A half-mile stroll through a maritime forest to the Currituck Sound, it’s a verdant place in the summertime, teeming with life, color and sound.

In the snow it’s transformed into a magical pathway to a winter wonderland.

The footing is slick—it’s obvious that not all the frozen precipitation has been snow—but it is passable.

Fifty yards from the sound, off to the left, there’s something large, furry and brown. As absurd as it may be, the first thought is, “What’s a moose doing here?” Followed by, “That is the largest deer I’ve every seen.”

Then the realization: It’s a horse…one of the Corolla Wild Horses. Soon another one appears, and another, until there are five of them, pawing through the snow to reach the plants that make up the ground cover.

These are not well-groomed steeds kept in the protective cocoon of a stable. Their coats are heavy and shaggy, and if they are cold, it’s not apparent as they move through the forest. At one point all of them glance over towards the boardwalk, but it seems as though humans are so common in their world that we’re not worth a second glance.

They move slowly back into the forest, their hoofs clearing snow from the plants, and after perhaps five minutes they’re out of sight. 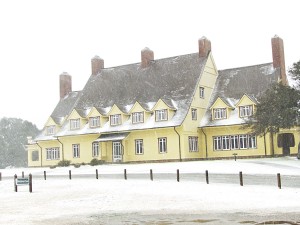 Whalehead Club in the snow.

The ride back seems anticlimactic after that.

There is a quick stop at the Whalehead Club to see what it looks like there—white, snow and cold, cold cold.

The snow line has moved steadily south throughout the afternoon as the temperatures continue to fall and it’s now well south of Kitty Hawk.

The wind is still cold—perhaps even colder than it was, and tomorrow promises to be the coldest day of winter by far.