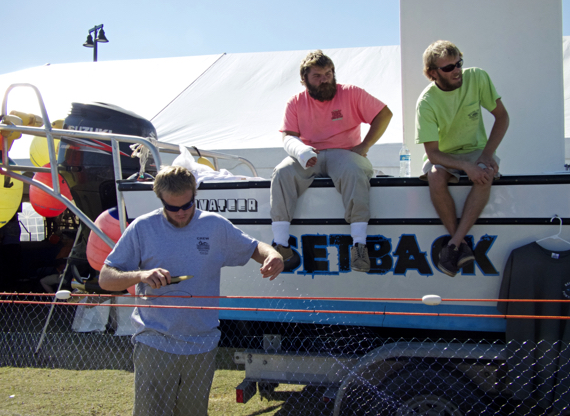 Whoever dialed up the weather for the 4th Annual Outer Banks Seafood Festival gets my vote for citizen of the year. With temperatures that topped out at 70, a gentle breeze off the sound and hardly a cloud in sight, conditions were as close to perfect as they could be.

Held at the Outer Banks Event Site in Nags Head, the festival itself did not disappoint. With lots of seafood to sample from so many Outer Banks restaurants, great music and happy crowds it truly was a day to celebrate the local heritage of living off the bounty of the sea. 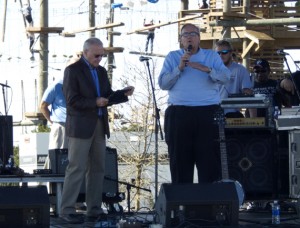 Behind that message exists the very real threat to that way of life—a point Chairman of the Dare County Board of Commissioners Bob Woodard noted in his remarks. His remarks were underscored by Commissioner Warren Judge who noted that underlying the joy of the day, was the idea of how important Outer Banks watermen are to the community.

Saturday was a day, though, to celebrate good food and friendship with 8,000 or so other people. The official count is not in yet, but the turnout looked to be one of the best yet.

The food, of course, was at the center of what the day is all about and there were some very tasty treats. Two in particular seemed to standout for me. The tuna bites with an aoli dip served up by Basnight’s Lone Cedar Cafe seemed to be done with just the right amount of seasoning.

The winner for me though, was the wahoo salad from Sam and Omies which I understand was made with yogurt. The yogurt gave the salad a little bit of acid balance to the fish and made it just a real delight to eat.

However, I made a mistake when I went—I should have gone with someone else. One person can only eat so much, but with someone else there, I could have doubled the samples I tried. That seems especially true for the Seafood Fest because the servings tended to be generous. In talking to festival goers in the dining hall, the universal opinion was the food was excellent. 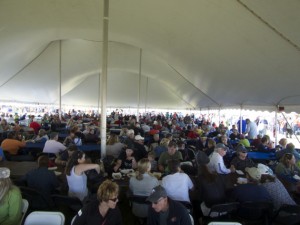 The dining hall was packed all day.

The dining hall—which is really a gigantic tent with lots of tables and chairs, is a great place to meet people and get a sense of how the day is going. That’s where the word went out the that fish and chips Captain George’s was serving was excellent and the serving size huge. I didn’t get there soon enough and they sold old. It’s also the place to meet people from Hampton Roads and Raleigh and to bump into old friends who live on the Outer Banks.

The vendor area was exceptionally well organized this year with wide aisles and lots of really interesting booths. There was a great mix of artists, locally prepared foods and the Lost Colony was there promoting Psych Path—their more than scary Halloween treat. 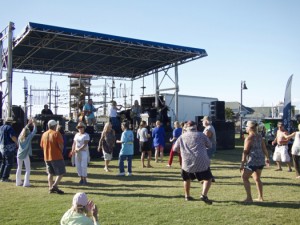 Up and dancing to Old Enough to Know Better.

The live music was as good as ever, and I have to give a special shout out to Old Enough To Know Better, the Manteo based band that had the front of the stage area covered in dancers.

A great day and a great way to represent an enduring and important part of Outer Banks life and culture. Start laying plans now to be at the 5th Annual Outer Banks Seafood Festival next year.