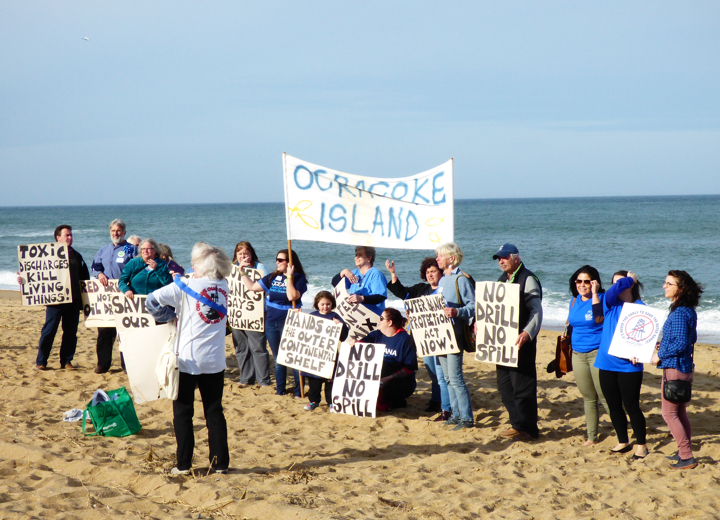 Organizing on the beach for a group photo. The signs from Ocracoke were brought out of the closet from the attempt in the 1990s to lease oil/gas sites off North Carolina.

As opposition to the proposed leasing of oil sites off the North Carolina coast grows, Outer Banks organizations and residents are finding their voice. At a press conference sponsored by Not the Answer NC and held to draw attention to the Bureau of Ocean Energy Management (BOEM) scoping meeting at the Ramada, a gathering of more than 200 citizens crowded into the reception room at the Comfort Inn, next door to the Ramada.

Business leaders and political leaders as well as two students from Manteo High School, Maddie Kinnisten and Aidan Charron, spoke out against the planned leasing of oil and gas sites.

President of the Outer Banks Visitors Bureau, Lee Nettles spoke first, citing the risk that any oil spill, or even the perception that there could be one would have on the local economy.
“The production of oil and gas carries with it a very real threat to the environment,” he said. “For an area like the Outer Banks whose local economy is almost entirely dependent upon tourism, and whose tourism is driven by the visitor’s expectation and enjoyment of world-renowned beaches and outdoor recreation, any threat to our shores and waters opposes an existential threat to our community.” 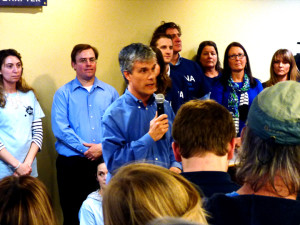 President of the Outer Banks Visitors Bureau speaking at the press conference.

Nettles went on to cite economic data showing that only under the very best of circumstances would oil and gas revenues equal tourism along the North Carolina coast. Included in his remarks was an assessment of how tourism has affected the Outer Banks.

Other speakers cited the imbalance of the economic risk incurred by the Outer Banks. “As residents of the Outer Banks we would bear the brunt of the risk and reap no financial benefit,” Monica Thibodeau, Mayor Pro Tem of Duck said.

A number of speakers pointed to alternative energies. BOEM just completed an Environmental Assessment of wind energy off the North Carolina coast that indicated huge capacity with lease areas designated for development.

Other speakers pointed to seismic surveying—an environmentally invasive method of mapping the seabed and penetrating deep into the substrata to search for oil. Although there are no peer reviewed studies demonstrating injuries and death of marine life through its use, there is a growing body of circumstantial evidence showing injuries and deaths of dolphins during periods of seismic surveying.

Placed under executive moratorium for more than 20 years, President Obama lifted the ban on leases in 2012. The process to obtain a lease and begin drilling is confusing and time-consuming—under the best of circumstances leases probably will not be awarded until the end of the the lease period in 2021, but concerns about the economic impact drilling for oil could have on a tourist driven economy have galvanized the Outer Banks.

The BOEM scoping meeting was a recent addition to the meeting the agency is required to hold as part of the permitting process to issue leases. The Kill Devil Hills meeting was added at the request of local political leaders, Congressman Walter Jones and citizen input. The purpose of the meeting is to educate the public about the process and to seek input.

The Outer Banks meeting is the best attended meeting BOEM has held. A recent meeting in Wilmington drew 400 participants—the Ramada gathering drew over 600.