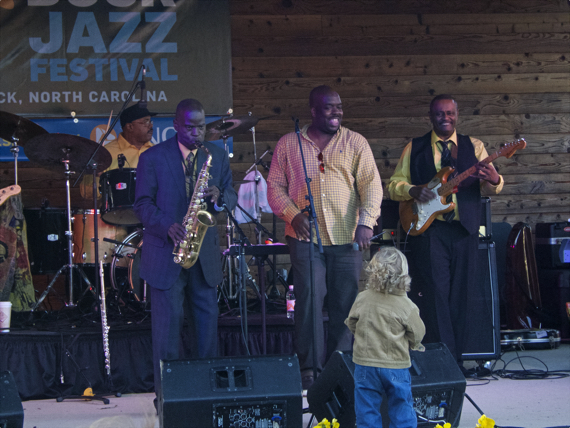 There are so many ways to fill the air with music and Columbus Day Weekend on the Outer Banks offered almost all of them. From the wall of sound that came from the cranked up amps at the Mustang Music Festival to the pure jazz notes of Bria Skonberg at the Duck Jazz Festival, this past Friday, Saturday and Sunday provided something for everyone. 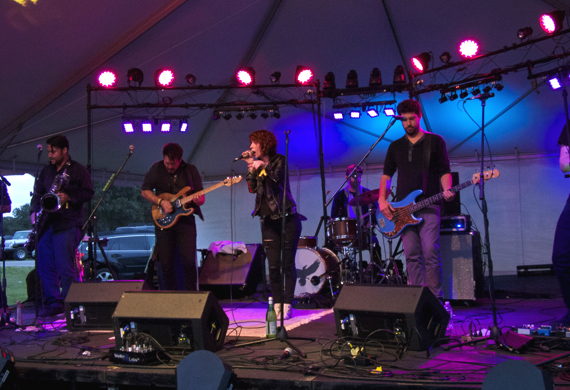 Sister Sparrow and most of the Dirty Birds.

After two weeks of northeast winds, overcast skies spitting rain and unseasonably cool temperatures, Friday’s picture perfect weather was like a gift from Mother Nature. Sure, Saturday was back to clouds and a cool—almost cold—wind from the north, but it didn’t rain and that made for a great festival . . . maybe the best yet.

Mike Diana, of Mike Diana’s Grill Room, brought three stages in for this years event, a strategy that meant more music and no gap between performances; and there were some great performances.

What was particularly compelling about the 2015 Festival was the scope of music on stage. Because of the range of sounds we heard, it’s a little difficult to point to one performance as a real standout; personal preference enters into it and how well the band plays to the crowd. If 300-400 people are crowding the stage, dancing to the music, it creates a feeling of excitement that translates into better music. Groups playing earlier in the day, sometimes did not have as many festival goers by the stage.

Sorting through 18 bands can be a little bit intimating; nonetheless, there were a few performances that really seemed to memorable.

Hailing from Philadelphia, American Babies were tight, high energy, with some great songs, most of it original. Excellent musicianship too. That was Friday afternoon.

Friday evening the three bands that finished up on all three stages were amazing. Mike Dillon with the Mike Dillon Band broke out some funk on vibes, which sounds contradictory, but it worked, and the headliner for the day, Rusted Root had everyone up and dancing.

Personally though, there is something about the New Orleans brass sound that transports me to another place and another time and the Dirty Dozen Brass Band took me there. Imagine a street band with a Sousaphone, flugelhorn, sax, drums and who knows what else pumping out high energy music, complete with a Sousaphone solo. Fun and funky all at the same time.

The Saturday weather was the counterpoint to the beautiful day we had on Friday, but the music didn’t let up.

One of the most enjoyable parts of any Mustang Music Festival are the kids from Ruth Wyand’s Mustang Music Outreach program that is partially funded from the proceeds from the festival. The kids did not disappoint; it is remarkable seeing the progress from the youngest students, shy and a little unsure of themselves to the kids who have been working with Ruth for four or five years, and how self-confident and professional their performance becomes

Local musicians—those who live here and those who grew up on the Outer Banks really showed well on Saturday.

Dan and Laura Martier performing together as Birddog were outstanding. Both are accomplished musicians in their own right, and pairing Laura’s vocals with Dan’s drumming creates a great sound.

Violent Mae is a duo, with Becky Kessler on vocals and guitars with Floyd Kellogg or drum and doing some backup vocals. Based out of Connecticut, Becky grew up here, but she has gone way beyond the music that she performed on the Outer Banks.

There are no gaps in their sound, hitting the audience with a wall of music—music that is complex and interesting with arrangements that take full advantage of Becky’s remarkable vocal range. Their music is not easily categorized which may be the one thing that holds them back. 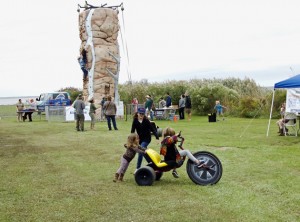 Funk definitely ruled the day, though, and Sister Sparrow and the Dirty Birds were like funk on steroids . . . although even that is not quite a good description. Sister Sparrow is pure energy on stage, the beat never stops, moving effortlessly between rock and funk with some reggae overtones.

There is no way to review everything that happened at the Festival. Noel the horse was wonderful. As is always the case with any Mustang Festival, the event was very kid friendly and the weather, if not perfect on Saturday, was still well within the acceptable range.

Sunday at the Duck Jazz Festival 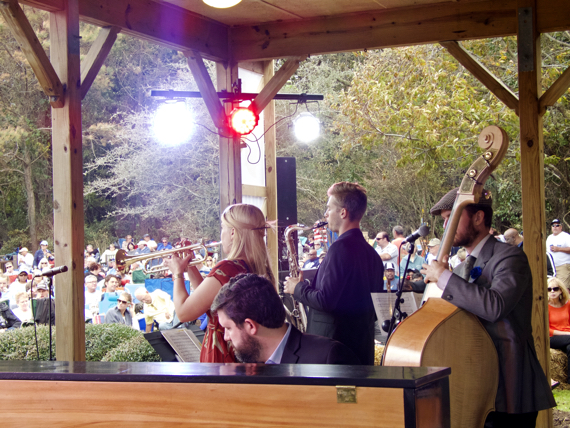 There were really two headliners this year. Maceo Parker—for years the band director and sax player for James Brown—wrapped the show up, but Bria Skonberg was on stage earlier in the day, and a special call out to her performance has to be included.

She is pure classic jazz, with a voice that is at once sweet yet powerful and style of playing trumpet that is virtuoso. Her performance of “Sunny Side of the Street” was just one of a number memorable moments on stage.

Maceo Parker is a master showman with an understanding of what it takes to get a crowd going. Interspersed with some outstanding musicianship was a good hefty dose of humor, noting that he was at a jazz festival but he didn’t play jazz, and proceeded to play a very stripped down version of Dave Brubeck’s “Take Five” as an example of what he would not be playing.

Except for all of his funk—and there was a lot of it—there were elements of classic jazz jams on stage, especially in the individual solos. One solo that really stood out was guitarist Bruno Speight who managed to get some sounds from his guitar that very few performers could ever hope to create.

In the end, though, it was all about funk and getting everyone up and dancing, and that’s what he did.