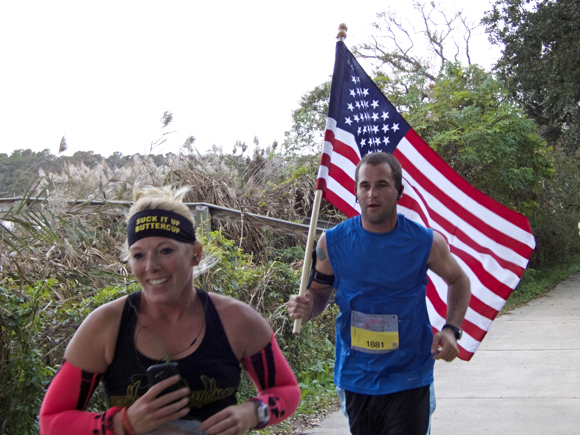 Matthew Cartwright from Hatteras, carrying the American flag throughout the Outer Banks Marathon. Matthew finished with a time of 4:41

With a brisk wind from the north and temperatures at race time in the low 50s, lead runners a the 10th Annual Outer Banks Marathon set a blistering pace, with Peter Chebet of Hebron, Kentucky crossing the finish line first at 2:20:22—matching exactly the previous best set in 2010. Carlie Frost of Pittsboro, North Carolina paced the women.

There were 867 finishers this year as the Towne Bank Outer Banks Marathon continues to draw runners from all over the United States. Most of the runners are from North Carolina and neighboring states, and quite a few are from the New England and the Mid Atlantic states, but there is also a good smattering of runners from Colorado, Illinois, and even a few from California.

The marathon has a well-deserved reputation for being one of the most beautiful runs around—that’s not just hyperbole; a number of national publications have commented on its beauty.

What started as a one day event in 2006 has evolved into a weekend celebration of fitness and running with multiple races—everything from a 5K to a half marathon, and that doesn’t include the Diaper Dash or the Fun Run. 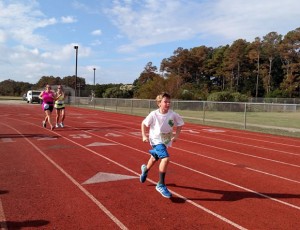 The shorter races were on Saturday, and the weather was warm and sunny. Not good weather for a marathon or half marathon, but for the shorter races, it was fine.

We’re still getting a count on how many visitors came to the Outer Banks for the weekend, but judging from all of the out of state license plates, the 2015 version of the Outer Banks Marathon was a hit.

Outer Banks Sporting Events organizes the weekend and 100 % of the proceeds are donated to the Outer Banks Community Foundation and the Dare Education Foundation. A great weekend for a good cause—about as good as it gets. 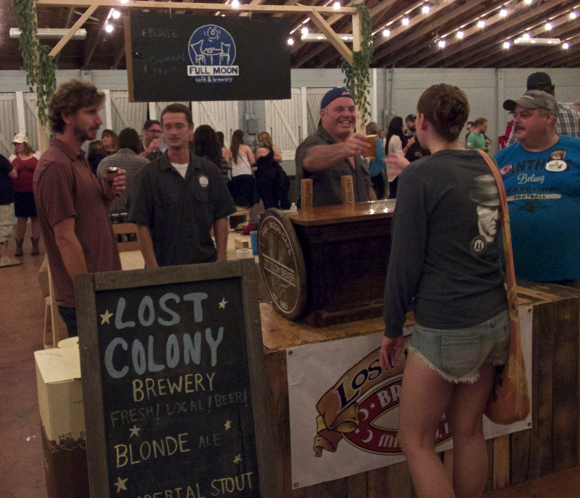 A quick note about a new Outer Banks event which hopefully will become part of the Outer Banks fall makeup.

Musical entertainment from Dangermuffin and the Hackensaw Boys was perfect for the setting and every ticket came with the chance to sample four appetizers. All of the food was great, but Rooster’s bacon and eggs rocked. It’s not quite bacon and eggs; actually the ingredients are smoked pork belly, their own =deviled eggs and a pepper jelly glaze. How good was it? I don’t even like deviled eggs and I went back for seconds.

The classic line, “so much beer and so little time,” truly came into play. Way to many beers to try and still be able to drive home, but through judicious sampling a fare number were tried. The Outer Banks brews stood up very well to the competition. Taste is too subjective, so we’ll let others decide what was best.

And it was for a good cause: “The event will feature veteran-owned breweries as well as our three local brewpubs, and proceeds will benefit the Dare County Veterans Advisory Council.” (Americana Brew Fest website.)