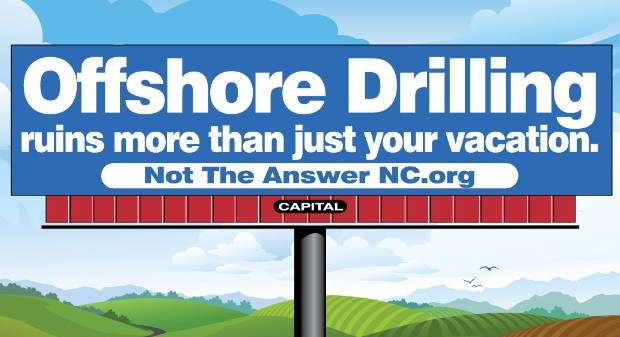 Billboard that Not the Answer NC placed on US 64.

As opposition to proposed offshore drilling for oil or natural gas solidifies, Outer Banks organizations are taking taking steps to have their voices heard.

At an organizing meeting held by Not the Answer NC last night (Wednesday) at the Outer Banks Brewing Station in Kill Devil Hills, Ivy Ingram with the Surfrider Foundation and Not the Answer NC outlined a course of action that they are hoping will grow local opposition to the government’s plan to exploit fossil fuels that may be buried under the continental shelf.

Talking to an audience of some 40 or 45 residents, Ingram outlined a plan to form committees to help communicate the organization’s position and why they are oppose the federal action.

“I have a list of some basic committees that we are hoping to get started,” Ingram said.

The committees that were formed were a committee to look at seismic testing, merchandising—there are plans to produce T-shirts and other products, marketing and PR, and education and outreach. There may be other committees formed if a need is identified.

In addition to organizing committees and indicating a plan to educate the general population of the Outer Banks, other activities and information were presented.

Early in the meeting Ingram noted Legacy is reforming. Created in the 1980s to stop the sale of oil and gas leases off the North Carolina coast, the organization has been dormant since the federal government withdrew the Atlantic seaboard from the offshore lease program and placed a moratorium on offshore leasing in the 1990s.

An Outer Banks organization, Legacy was one of the most powerful voices opposing the exploitation of offshore oil reserves. Legacy member, Colleen Oaksmith, indicated the group was interested in playing a role in the debate, but there was still discussion among members about what specifically that role would be.

“We are working on a mission statement right now,” Oaksmith said. “We are trying to figure out where we fall within your group.”

Not the Answer NC does have a billboard that was funded through crowdsource funding. The billboard is on US 64 on the way to the Outer Banks. The group is hoping to place another billboard on US 158 in Currituck County.