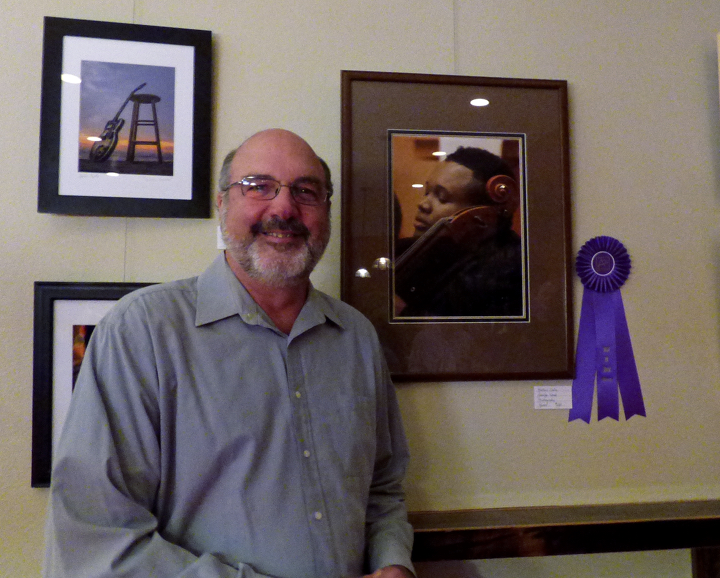 The Dare County Arts Council and Outer Banks Forum for the Lively Arts are two of the oldest and most vibrant organizations working with the Outer Banks creative community.

When the two nonprofits come together for an event great things happen.

This is the second year for the Spotlight on Performing Arts, held at Trio again this year.

Featuring the photography and paintings of musical performance, the exhibition created a vision of the performing arts as part of the Outer Banks narrative, a point artist George Wood, whose photograph “Mellow Cello” won the Judge’s Award, made in talking about the exhibit.

“Take a look at the images,” he said. “And from that, try to understand the story.”

George’s photograph will grace the cover of the Forum’s Playbill next year.

In addition to Wood’s photograph, David Huff won the People’s Choice award for his black and white study of a clarinetist at work, “Heart and Soul.”

The title of the piece seemed a fitting reminder about the theme of the evening, something Forum Board member Barbara Hanft spoke about in describing the event. “It’s a great collaboration between the Forum and Arts Council,” she said. “It brings the performing and visual arts together.

The Outer Banks Forum has been a part of the Outer Banks for over 30 years. Their next featured performance will be the Virginia Symphony on Thursday April 23rd. All performances are at the First Flight High School Auditorium.

Sponsored by Marc Hellman of OBX Chevrolet-Buick, the exhibit will be on display until May 22.