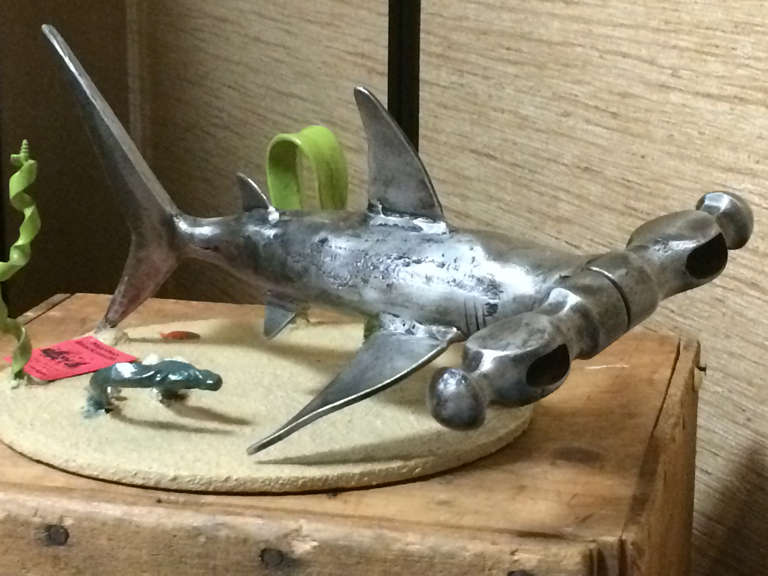 The Outer Banks art community is a diverse and remarkable collection of artists, and that was on full display at the Annual Arts & Craft Festival held yesterday and today at the Hilton Garden Inn in Kitty Hawk.

It started three years ago when artist James Melvin and potter Charlotte Alexander started thinking about the art shows they had been a part of on the Outer Banks.

“There were shows in Manteo like the New World Festival (of the Arts),” Melvin said. “We thought it would be nice to have something for artists at this end of the beach.”

Melvin and Alexander believed any event they put together should reach beyond the arts community and benefit the Outer Banks generally. They decided that after expenses were met, they would donate the balance to two local charities. “We divide the balance between the Outer Banks Relief Foundation and N.E. S.T.,” Alexander said.

The first year the event was held in July, a time that did not seem to work as well as the organizers had hoped. Families with children coming off the beach were not in the market for some of the finer pieces of art on display according to both of the show’s founders.

Last year the show moved to September and the show was far more successful. “This is a good time of the year for this kind of a show,” Randy Hodges who is a blacksmith artist said.

This year with marketing help from Susan Estrella of Cactus Designs, artists felt the show was even more successful. Susan, who also participated in the show, works in kumihimo, a traditional form of braiding to create bead jewelry. “I love the colors. I get so inspired,” she said in describing her artwork. 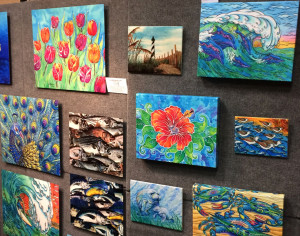 The artwork of Stephanie Kiker.

The artwork was the star of the show. Demonstrating an extraordinary range of media, styles and genres, walking around the booths the skill of the Outer Banks artists became apparent.

There were the bright, wonderfully whimsical paintings of Stephanie Kiker, who drove up from Hatteras for the show; Randy Hodges describes his work as “meddling with ferrous metals” and his creations are playful yet thought provoking. Meg Rubino was there, with her distinctive eye for the colors and life that people bring to the beach.

The pottery of Charlotte Alexander, who works with her husband Jerry, is functional and beautiful.

Then there is the artwork of James Melvin. Working with almost every medium available to an artist, his paintings of Outer Banks life are filled with the subtle hues of the colors around us.

It was a great festival and worth at least an hour or two of anyone’s time. It wrapped up today, so it looks like a full year’s wait for the next one . . . a wait that would seem to be worthwhile though.