Nu Blu-Bluegrass and a Little More 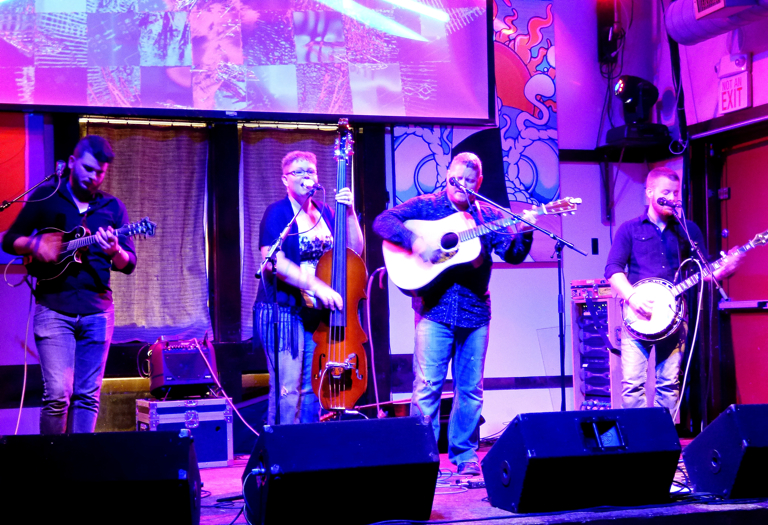 Music speaks differently to all of us, and we all have very different tastes. Yet there are times when we hear something in music that catches us by surprise, holds our interest and stays with us.

Maybe that’s why the first time I heard Nu Blu at the first Outer Banks Bluegrass Festival, I knew I was hearing something special. And when I heard them again last year, that was confirmed.

There are four of them—Carolyn Routh does most of the vocals and plays stand-up bass, her husband Daniel is on guitar and vocals, Levi Austin helps with vocals and plays banjo and guitar, and Austin Koerner is on mandolin, with occasional vocals.

Here’s why they are so compelling—the musicianship, the talent and how tight they are musically grabs my attention and won’t let go. And even though they are clearly bluegrass, every once in a while little touches of other forms of music come through and keep the arrangements fresh and compelling.

In talking to them what is apparent is they love what they’re doing, they love their music, and their range of musical interests extend far beyond bluegrass.

“I had a music scholarship to study classical guitar at Campbell University,” Levi says. He kept gravitating toward his banjo though, which seems natural since the bluegrass bug hit him at an early age. “I went to a gospel bluegrass event when I was nine years old,” he says. “That’s when I knew I wanted to play banjo.”

Austin Koerner started on drums, which may be why the rhythm patters he lays down when he chords his mandolin are so strong. However one of the hallmarks of the Nu Blu style are the soaring, precise leads he plays—often around the melody, framing it, and at other times a true solo played fast and clear.

The roots of bluegrass are in the songs people sang in the hills and backwoods of the South. An important part of that was—and is—a gospel tradition, and Carolyn Routh is very much a part of that tradition.

Her voice, a rich and powerful alto, is well suited for the gospel songs she loves, but her range and knowledge of how to phrase lyrics and music extends far beyond bluegrass or gospel. There is a YouTube recording of NuBlu performing Pat Benatar’s Shadows of the Night that is memorable for its vocal power and arrangement.

The group’s latest CD, All the Way, is scheduled for release September 16. Some of the best known names in bluegrass make an appearance on the recording, including Rhonda Vincent, who has sometimes been called the Queen of Bluegrass.

“It took ten years to get our overnight success,” Daniel says. Actually more like 11 or 12 years, but who’s counting.

Daniel, who is a very good guitar picker, takes an occasional vocal lead. Beyond his musical skills, he is the chief cheerleader, promoter and strategist for the overnight ten year success for the group.

They will play almost anywhere. Now in the second week of a two week tour of the Outer Banks, they have played Tanger Outlet, a church in Manns Harbor and the Outer Banks Brewing Station. They’re scheduled to perform at the Whalehead Club tonight, the Nags Head Pier on Thursday, down in Frisco on Friday and finish up at the Blue Point in Duck to cap the restaurant’s 25th Anniversary celebration.

“You have to go where the people can hear us,” Daniel says. “You never know who’s going to like what they hear.”