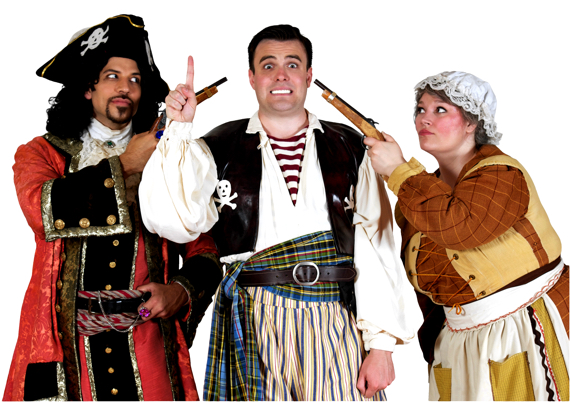 Young Frederic looking not so heroic with the Pirate King and Ruth on each side. Photo, NYGASP

No one ever accused a Gilbert and Sullivan operetta of a tight, neat plot; quite the opposite—their plays seem to delight in the absurd and sublime and Pirates of Penzance is very much in that tradition.

What plot there is consists of a hard-of-hearing nursemaid, Ruth, who was told to apprentice five-year-old Frederic to a (ship’s) pilot, but misunderstood and apprenticed him to a pirate. As the play opens Frederic is now 21 and his indenture is over.

But not so fast—it’s convoluted and confusing, but Ruth, having her romantic overtures to Frederic rejected, has gone back to the Pirate King and told him that the lad was born on February 29, and although he is 21, actually he has only had five birthdays and he is still indentured.

That is a brief synopsis that does not do the absurdity of the plot justice. But the beauty of a Gilbert and Sullivan performance is in the music, and to hear voices of the caliber of the NYGASP perform is to be transported to the best of New York theatre.

There was no weak performance anywhere, but there were some performances that so stood out that special attention has to be taken.

Sarah Caldwell Smith, as Mabel, Frederic’s love interest, seemed to effortlessly fill the auditorium with her arias. Coupled with perfect comic timing, it was absolute perfection.

David Wannen, who doubles as the organization’s Executive Director, has consummate command of the stage and a wonderful baritone voice that creates a Pirate King worth remembering.

Major-General Stanley, Stephen Quint, has to be given a special notice. Anyone who can sing:

I’m very good at integral and differential calculus;
I know the scientific names of beings animalculous:
In short, in matters vegetable, animal, and mineral,
I am the very model of a modern Major-General.

with perfect diction and comedic timing at 180 beats to the minute must be congratulated.

“Modern Major General” is at the heart of what a Gilbert and Sullivan play is all about. Plot was secondary to poking holes in the pomposity of the society of their time, and what is very apparent is many of the pretensions of society they saw are still very much with us.

It also, though, allows for some judicious updating of the material. A dance scene in the second act between the Pirates and the constables who were sent to arrest them with the song “With Cat-Like Tread” includes a certain amount of dancing. The go back to where they were all hiding originally (it’s confusing but makes sense in the play), grab shiny top hats and do a routine straight from Chorus Line.

There are ad-libbed lines, and couple of other inserts and all of it works very well.

The First Flight High School auditorium seems like it would be too small for a full New York stage production, but according to Wannen, it’s very much in keeping with the venues the NYGASP plays. “We’ve played everything from church sanctuaries to lecture halls, to theaters to 4000 seat outdoor venues. The theater itself is a wonderful space,” he said.

“To us it’s been a wonderful professional experience. What makes this special is the hospitality. We’re sitting here on a beautiful beach in a wonderful community,” he went on to say.

There will be a second performance tonight, although early indications are that it’s sold out.