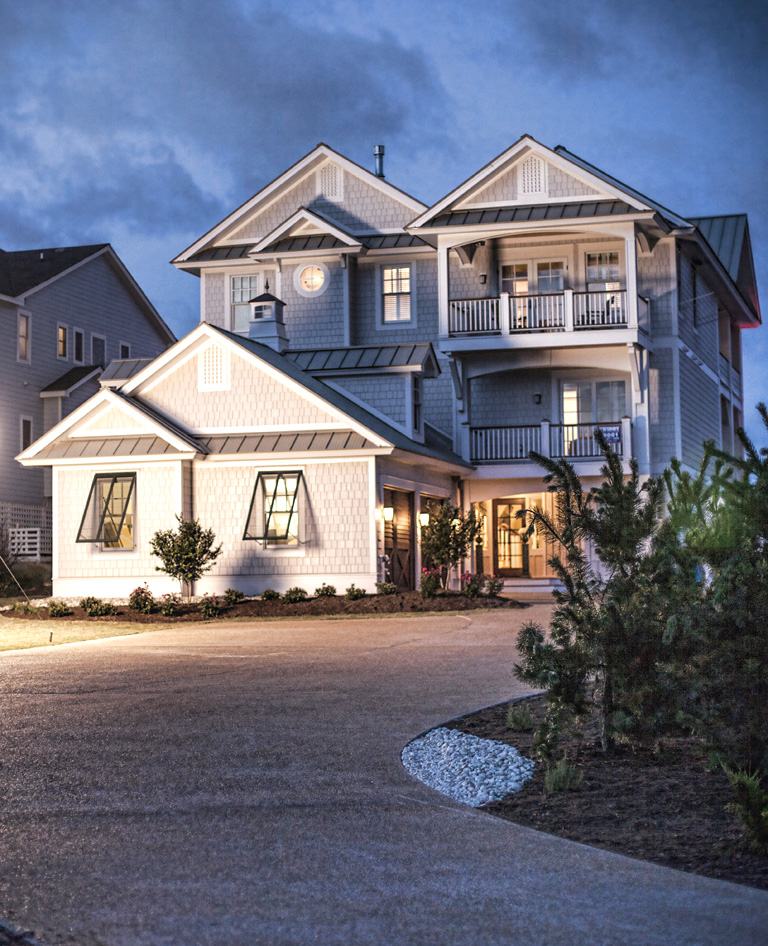 New houses are not going to start popping up like mushrooms in a cow pasture on the Outer Banks—at least not any time soon. But there is life in the housing market, especially in Corolla… surprising strength, in fact. 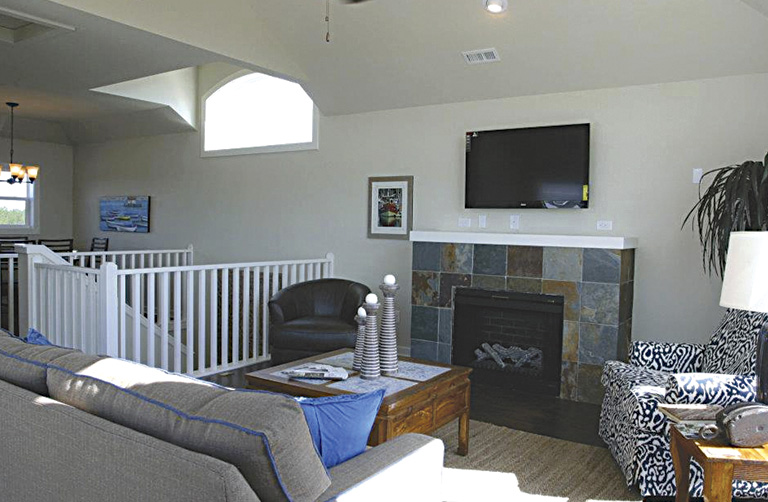 Interior of BD&A home at Villas at Corolla Bay.

Last winter when BD&A began their Villas at Corolla Bay project just south of Corolla Village, there was considerable skepticism. The housing market in both the Outer Banks and nationally was in a dismal state, banks were very hesitant to loan money and the nation had just begun to inch its way out of a deep recession to a barely perceptible recovery.

From discussions with Company President and builder, Eric Avery, who has built over 2000 homes over the years, Uppalapati knew good quality artisans were available right away. Property management companies had noticed a shift away from 10 and 12 bedroom homes to more affordable 4-bedroom  houses. Towne Bank was ready to go forward with this type of project, and Currituck County wanted to see some new home construction.

Everything was in place but the belief in the project. “The most difficult part of the process was pulling everybody together at the table and conveying the vision that this was a win-win for everybody,” Uppalapati says.

The project has been an extraordinary success. Plans called for building 10 homes at a time, and by following that arrangement BD&A has been able to get the best price on materials. By having a large well-motivated and skilled crew to build the homes, prices have been kept down and the houses have sold very well.

In the first phase homes sold for $399,000, and the first 10 properties sold before construction was finished. The project is now well into the third group of 10 homes with prices rising to $429,000. The houses are continuing to sell very well.

The Villas at Corolla Bay are not the only major new home construction project in the Corolla area.

In 2010 the company purchased a parcel of land once owned by the Audubon Society immediately to the north of the Hampton Inn in Corolla. Originally SAGA planned to create a combined hotel and retail development on the land, but legal and community challenges to the zoning of the land created an environment in which company officers felt it would be better to change direction and build a residential subdivision. (See “A Tangled Web”, lead story, Fall 2010, NBS)

It should be noted that the challenges were what seemed to be human error in changing the property from residential to commercial. The error occurred before SAGA existed as a company.

As they looked over the market, brothers Amit and Sumit Gupta, principle owners of SAGA, felt there was strong demand for larger investment homes. “The rental market has only gotten stronger in the last three to four years,” Sumit observes. “We planned Pine Island Reserve as an upscale development.”

Thirteen homes are planned for the development and each house will be architecturally unique, although there are similar design features among them. The oceanfront properties feature eight to ten bedrooms and are between 4,000 and 5,000 square feet.

Designed for a luxury vacation market, finished homes including the lot range from a little under $3,000,000 to considerably more than that figure—and they are selling. As the North Beach Sun goes to press, one of the homes has been completed and sold, another sold property is nearing completion and work is beginning on two other lots. Including the completed home, over half of the lots of the lots have been sold with considerable interest in the other parts of the project.

The surge in construction is not limited to larger companies. Smaller contractors—builders who specialize in individually built custom homes and renovations have also seen a noticeable increase in business.

Richard Bell, managing member of Across the Board Construction, LLC, just completed a major kitchen renovation in Duck and is in the middle of a very large remodel in Nags Head. In the past year, he has seen some clear trends emerging. “What I’m getting is calls from clients I talked to three or four years ago and . . . filed away,” Bell says. “These people are calling back saying the timing is as good as the timing is going to get.”

Specializing in new home construction in Carova where he lives, he has found clients who are approaching him already have purchased property. “I’m getting a lot of calls for building on a lot that people already own,” he says. “They own the lot and they want to make better equity use of it.”

There does not appear to be any one factor that is driving the increase in building—rather a number of factors seem to be coming together at the same time.

“People have been playing the interest rating game,” Bell notes. “But construction costs have been going up. Roofing and siding materials have gone up 30% in the past 18 months. Manufacturers realize there’s a pent-up demand.”

That pent-up demand is something that Bell is seeing for himself in talking to clients. “The reality is, people are wanting to get back in to building houses,” he says.

All the contractors, in discussing how they have brought their projects to fruition, stress the need for partnerships.

Bell has put a lot of effort into developing strong working relationships with realtors at Sun Realty and Twiddy. “If I tell a realtor the house will be done on a certain day, it has to be done because their renting it,” he says. “My crews (subcontractors) know that. I’ve gone through a lot of people to find the crews I have now.”

“Our product is not just a home. It’s a service,” Amit says. “The homes we are building are a turnkey package that includes builders, architects, marketing and rental.”

That same point of view is at the core of the BD&A success. Working through Towne Bank, financing is often available. If the property owner wishes to rent their home, there is a property management company already in place to handle the transaction.

Corolla Classic Vacations was the first management company to work with BD&A on the Villas at Corolla Bay project. Kathleen Reilly, Director of Marketing for the company, gives some insight into how and why they decided to work together.

“It’s a niche market, the smaller families,” she says. “It is a new type of product for us. But as the economy changed, we had to change our focus. This is a risk we’re taking, we felt. But (now) we’re in the middle of the summer with every one of our homes booked. It’s been great. It’s been a success story.”

Senior managers in SAGA and BD&A acknowledge that taking on subdivision sized projects in a soft economy seems counter-intuitive, but in reviewing Outer Banks real estate sales and visitation data, it seemed clear to them that an opportunity existed.

Uppalapati points out that the market is well-positioned for his company’s product—well built, reasonably priced new homes. He acknowledges that there is competition from bargain priced houses—foreclosures and short sales—but notes that there are considerable additional costs that often come with them, and those costs often drive the price of a bargain home to a comparable level with the Villas project.

“Our standards are very high,” he says. “If you can get a new home from us with our guarantees for a comparable price, why wouldn’t you do that?”

Throughout the past five years SAGA has continued to build houses, although Pine Island Reserve is one of the largest projects they have undertaken to date.

Although they recognize that the economy has been struggling, the company has focused its concepts on a long term vision. “The basics of our economy are fundamentally sound over an extended period of time,” Sumit says. “We have the beach. To us it’s apple pie. That’s our asset. It’s a good value.”