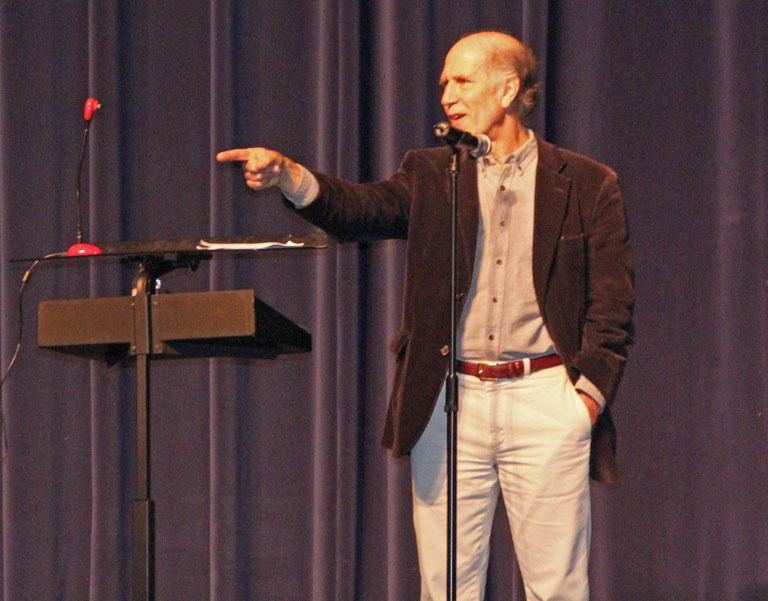 In my life I have come across people who left me wanting more. North Carolina Poet Laureate Joseph Bathanti is one of those people.

As the First Flight High School auditorium filled with English students and teachers on Friday, the Appalachian State University Professor began telling the students and teachers a little bit about himself. I related to his struggles of being stuck between finishing high school and choosing a college.

“I am from Pittsburgh, my grandparents immigrated here in the 20s,” Bathanti said. “I am the very first person in my family to go to college.”

As Bathanti discussed the advantages of using reading and writing in everyday life, I listened to him explain how these tools could help prepare me for life changing events, such as the impact of a war. I looked at the students around me, their eyes fixed on Bathanti, listening quietly to what he had to say.

Realizing that some of my fellow classmates, some of my best friends might one day be fighting for our country gave me a chill. His words, his message, made me understand that literature and poetry are not just ways to earn a grade in school, but a way to possibly save yourself from difficult times.

Bathanti described the horror of learning his draft number was 18 and trying to find a way around his circumstance. I felt the emotion as if I was in the room when his number was drawn. He attempted to be a conscientious objector. That did not work. He then got the application for McGill University in Montreal, Canada. That was left blank and forgotten. The Viet Nam war ended. The audience let out a sigh of relief. Bathanti was left with guilt.

Bathanti wanted to do something with substance in his life, the guilt guiding him. After being named North Carolina Poet Laureate he declared he would work with veterans to help them express their emotions and harvest wartime stories. He teamed up with the Veterans Writing Project.

Bathanti closed by reading a poem called Knocked about his father, the main reason he was able to stand in front of us today. As everyone clapped I wanted to hear just one more poem. I knew I could sit and listen to his stories, poems and advice all day.