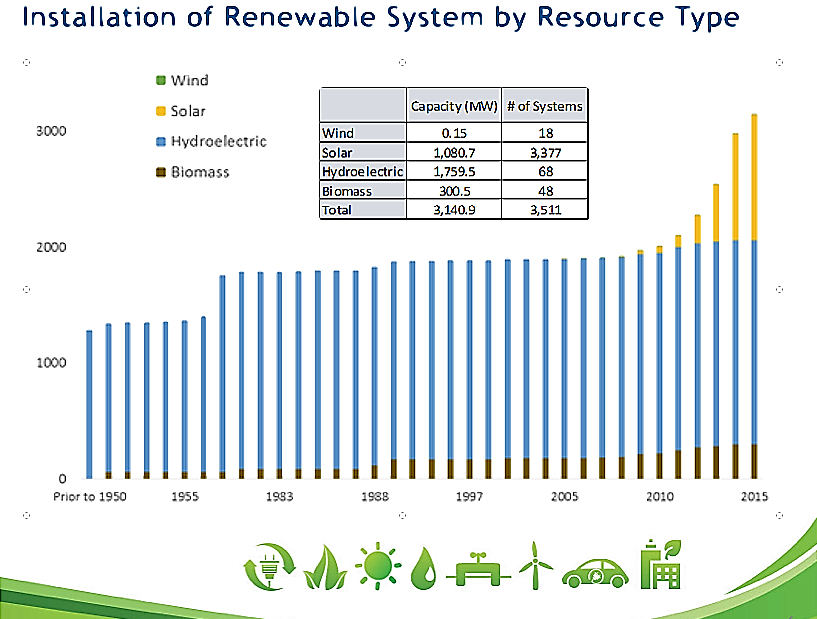 With a brisk north wind turning the wind turbines that help power Jennette’s Pier in Nags Head, the Outer Banks Chamber of Commerce hosted an Energy Forum Luncheon on Thursday. Sponsored by SAGA Construction the the forum focused on renewable and alternative energies and efficiencies and where the state of North Carolina currently stands.

The greatest potential for energy production exists in the three offshore sites for wind energy production that Bureau of Ocean Energy Management (BOEM) has identified, and the federal government is moving quickly to develop that resource.

According to Jim Bennet, Chief of the Office of Renewable Energy Programs for BOEM, the first blocks may be leased by the end of 2016. “We’re going out with a proposed sale and we’re hoping to have a sale by the end of this year in Kitty Hawk,” he said.

Initial estimates of the Kitty Hawk Wind Energy Area (WEA) put the potential at 2000 MW. That, however, may be low. “They (wind turbines) are getting bigger and getting more efficient,” Bennett said.

A lease purchase in an involved process for developing a WEA and it will be a number of years before utility quantities of power are produced. The lease sale is a very significant first step.
Recognizing that he was addressing a room filled with guests who are concerned about tourism he did address the issue. Citing a European study of offshore wind farms six miles for the shoreline or greater he said, “There were no impacts.”

If wind energy holds the greatest potential for energy production, it is in solar energy that the state has seen its greatest growth. Through the use of state and federal tax incentives coupled with unused farmland and abundant sunshine, the state has moved into a leadership position.

According to him legislative action and policy changes coupled with increased state and federal incentives created an ideal environment. “It covers approximately 45% or development costs,” he added.

Brandon described two kinds of solar power—utility scale and personal. The incentives the state has put into place has targeted large investments. “The state of North Carolina essentially leads the country in utility scale solar production,” he said.

With two solar farms in Currituck County, one in Shawboro and the other in Moyock and permitting moving forward on a third, evidence of that boom is at the Outer Banks’ doorstep.

The speakers cited a 2007 tax credit for installing renewable energy systems as the impetus for the growth in solar power installations—a tax credit that has benefitted consumers, according to Ivan Ulaub, Executive Director of the North Carolina Sustainable Energy Association (NCSEA).

“When the law was passed in 2007, a study by the Utility Commission estimated it would save rate payers over 20 years over $500 million,” he said. “Updated studies have shown because renewable energy has declined as much or more than natural gas, that estimate is an underestimate. It looks more like consumers will save more like $650 million.”

The incentive, however, is no longer in effect. “The state legislature chose not to extend it,” Urlaub said.

The forum covered a number of issues.

Bennett began his discussion by describing the exploration and permitting process for offshore development of gas and oil reserves—a contentious issue along the North Carolina coast.

Dewey Hemilright, a commercial fisherman who lives in Kitty Hawk, was critical of steps BOEM has taken to insure access to marine resources. “You have not done a very good job of engaging with the commercial fishing industry. . .” Dewey said. “If you could address that, I would appreciate it.”

“It is certainly not the intent to restrict the commercial fishing. There is not an exclusive right to that area. The lessee can and should negotiate how that area is accessed,” Bennett told him.

In his remarks, Bennett was referring specifically to the need for the lease holder to engage directly with commercial fishermen. According to Tracey Moriarty, BOEM spokesperson ” . . .neither BOEM nor the lessee has authority to restrict access to an area on the Outer Continental Shelf. The US Coast Guard oversees navigation and access, and any restriction would go through a public rule making process. For other, already leased offshore wind projects, the US Coast Guard has stated they would not restrict access to an area leased for offshore wind.”

Solar energy, though, does seems to be the star of the North Carolina energy portfolio, although there is an inherent limitation—no sun, no power.

Urlaub, perhaps in recognition of that, finished his discussion with an update on current battery technology.

“Batteries are coming,” he said. “Exactly how has yet to be determined. But the cost of energy storage has been dropping precipitously, just as solar did a couple of years ago.”