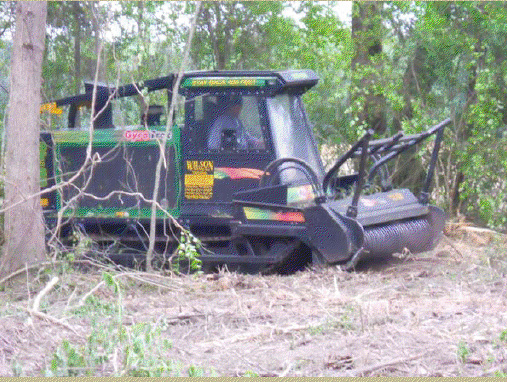 Type of bulldozer used to clear firebreak. Nags Head project is on hold as repairs to equipment are completed.

Originally slated to begin Tuesday, Plans by the Town of Nags Head to clear a 30’ wide buffer between properties bordering Nags Head Woods and the heavily forested preserve have been put on temporary hold. According to Nags Head Fire Chief Kevin Zorc. “The equipment we need is getting repaired,” he said. “We’re hoping for next week.”

The firebreak, created in cooperation among the town, NC Forest Service and the Nature Conservancy, owner of Nags Head Woods, will protect both property owners from a forest fire and the preserve if a bordering property catches fire.

The firebreak, paid for by a Hazardous Fuels Mitigation Program grant is part of an ongoing push by the Nags Head fire department to reduce fuel in the vicinity of the forest. “We’re always on the look out for ways to limit the amount of combustible material,” Zorc said.

Plans call for clearing the underbrush and growth less than 4” in circumference. Not all plants under the minimum size will be removed, however. “There are a few species that are a little more sensitive,” Zorc said. “We want to preserve the more sensitive species.”