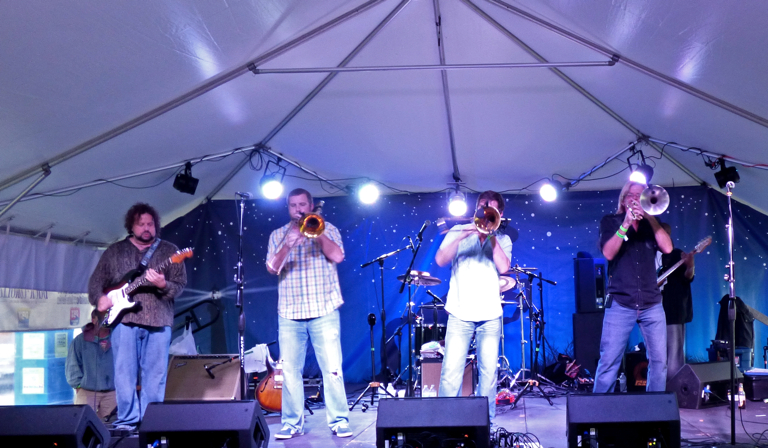 Somehow, Mike Dianna always manages to find some of the most unique sounding bands around for his Mustang Music Festival.

That doesn’t mean weird or hard to fathom. What he consistently puts on stage though are top flight musicians playing music in unexpected ways.

Last spring it was the Dave Mayfield Parade–a great show, amazing music and watching Mayfield caress his body took the whole thing to a different level of fun. And then there was the

And then this year he brings us Bonearama–again from New Orleans. Three trombone players–any one of whom would be the standout in any setting–lead guitar, bass and drums. You had to be there to experience how dynamic and joyful that sound was.

Pointing out Bonerama as an example of the unique flavor of Corolla’s Mustang Music Festival in no way denigrates the other bands taking the stage.

Friday night’s headliner, Karl Denison’s Tiny Universe was the perfect prelude to the Duck Jazz Festival. This was jazz the way it’s supposed to be. Great musicians interweaving these seemings disparate parts into an readily identified creation.

Then there was Big Daddy Love. Anybody who recalls the heyday of country rock would be in love with this group. To use a phrase that rightfully was buried many years ago . . . they rocked the house.

More on tap today including the return of Outer Banks own Becky Kessler with Violent Mae at 3:00 p.m. on the deck.