Mermaids and Mermen on the Outer Banks 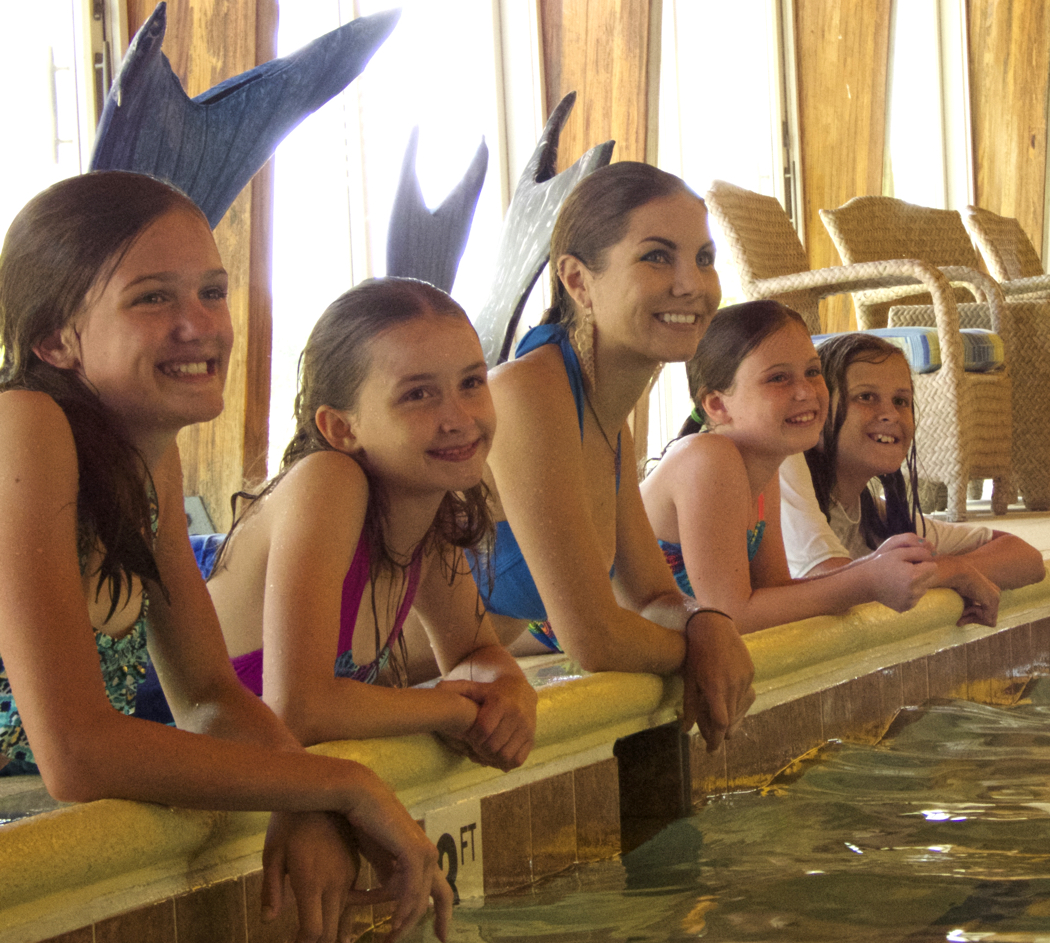 Mermaids and King Triton on the end. Hannah Burgess, professional mermaid and instructor, is second from the left.

It’s not easy being a mermaid . . . or in this case three mermaids and one merman.

First of all there are rules—things like, “Only use your tail under adult supervision” and “NEVER try to hop around on you tail. It can very easily get caught under you which may cause you to trip and fall.”

Then there are the warm up exercises that Kitty Hawk Kites professional mermaid Hannah Burgess makes them do, stretching arm and leg muscles.

Finally the mermaids and merman, who we will call King Triton, get in the water. But there’s more…first there’s floating on their backs, then swimming the length of the pool at the Sanderling.

At last it’s almost time to put the fins on, but as the mermaids and King Triton discover, it does take real technique. But with a little squirming everyone has their fins on.

Being a mermaid is all about knowing how to use your fin.

The object is to use your entire legs to move the fin. Perhaps a little bend of the knees, but too much and the angle of the fin is all wrong and King Triton won’t move much at all through the water.

The guppies—that’s what I was told young merfolk are called—swam back and forth underwater a few times, improving their ability at each cycle.

Finally it’s time for some real merfolk challenges—swimming through a hula hoop, which is probably more exciting underwater than above water and then blowing mermaid kisses underwater, which includes some fairly humorous instruction from Hannah about the best way to go perfect the technique.

It was a mostly family outing at the Sanderling. The Sanderling pool can only handle four mermaids at a time and a friend of Shelly Fennemore from Delaware told her about the class and she signed the kids up.

“The girls were really excited and the boy was like, “Whatever,’” Fennemore said.

Kitty Hawk Kites also offers classes at Beechwoods in Kitty Hawk. An outdoor pool, it’s much larger than the indoor Sanderling facility, and up to eight would be merfolk at a time can learn how to swim with their legs held together and one big fin to push them through the water.

Brooke Rowe, who put the program together first started thinking about it last year.

“We started selling them (mermaid fins) in our stores and they (the manufacturers) mentioned to always say something about the safety,” she explained. “I heard that and I thought we could do a lot more than that.”

The level of instruction offered is excellent. Hannah Burgess really is a professional mermaid and has performed underwater at the Virginia and Roanoke Island Aquariums. Brooke is an experienced scuba diver as is Kristin Long the other instructor.

The class takes about an hour. There are mermaid and merman tails for all sizes so if Dad wanted to take a class with his littlest mermaid, it could be arranged.