Meet the Mayor…You Can Call Her Sheila 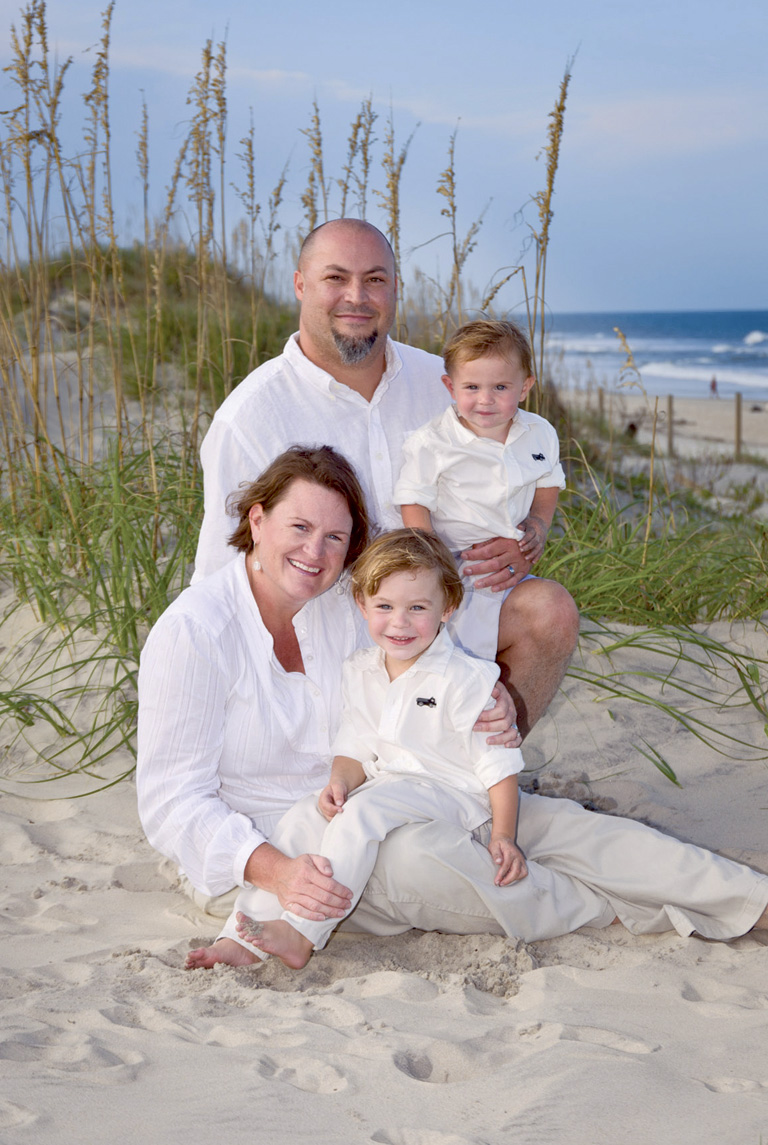 Mayor Davies and her family.

Sheila Foster Davies met her husband when she picked him up on a bus she was driving—“a short bus,” she adds, not missing the humor—shuttling attendees to the Outer Banks Jaycees Beach Music Festival. It was a fundraiser for the YMCA, her then-place of employment.

Now she and Daryl, celebrating six years of marriage this November, have two boys: Wyatt, 4, and Chase, 2.

Her roles as wife and mother come first, Davies is quick to note; but since she was sworn in on Dec.12, 2011, she has served Kill Devil Hills as mayor.

“Even on some of the campaign literature, I put ‘Sheila Foster Davies’ because that’s what people knew me as,” she says, referencing her maiden name.

She was serving the community in multiple capacities long before her current position.

She brought the YMCA to Nags Head and was its director for more than six years. She had started with the YMCA in her hometown of Suffolk as a college student, getting promoted to aquatics director, membership director and then assistant director. Davies worked as a lifeguard in Duck one summer and describes moving to the Outer Banks as a “dream come true.”

Her resume includes an impressive list of accomplishments, but she remains humble and approachable.

“In each professional role, I have been able to bring new and needed services to the community,” she says. “I’ve been blessed in my career with so many opportunities to do satisfying work. A big thing in my heart is serving the community.”

And when she felt the community was wronged, “I ran [for mayor] because I thought the way the board [of commissioners] was interacting with and representing the citizens needed to change.”

“The makeup of the board before was so cohesive,” she explains. “They were not taking into consideration how the citizens felt.

“The issue was never about Lowes,” she continues. “It was about how things were handled by the town. I said at the opening I want them to be wildly successful, and I do.”

But she felt allowing Lowes to build the biggest footprint they could—with parking and lot coverage—was literally paving the way “for any big box store to come in and build as big a store as they can without being transparent to the citizens.”

Originally she planned to run for a commissioner seat, but with a strong support group, she decided to challenge the mayor.

“I felt qualified enough with my background,” she say.

The mayoral position is a part-time job. Davies is currently employed full time with Albemarle Hospital Foundation, and her current project is creating a telepsychiatry program for ten hospitals in northeastern N.C. She sets up secure videoconferencing equipment, enabling people who come in the emergency department with mental health and substance abuse crises to get in front of a psychiatrist.

Davies received a B.S. in Kinesiology and Psychology from the College of William and Mary in 1995; earned a Master of Public Administration online in 2009; and anticipates completing her Ph.D. in Public Policy/Administration with a focus in health policy in December 2013.

As mayor, her goals include increasing transparency and access to town government.

“I’m proud to say we’ve made huge strides in six months,” she says.

Meetings are televised for the first time in KDH history, and Davies also records a Spotlight segment (three- to five-minute quick meeting overview) that can be accessed on YouTube or Facebook. Full board meetings are on YouTube as well, or people can pick up copies at the library.

Before she took office, “Other than getting a written copy of the minutes, there was no way to follow what happened in meetings,” she notes.

Another goal is creating a vision for the town. “Look at some of our neighbors,” she says. “Duck has a very obvious vision with the boardwalk, to make a nice walking community. Manteo, same thing.” KDH currently has no defined vision, but she states, “It is so important.”

“If citizens have something they think would help the town, it’s appropriate to reach out and tell us,” she says. “Don’t assume we do know.”

For those intimidated by titles, Davies points out that she was a citizen prior to becoming mayor, and one day she’ll be a citizen again. She simply responds, “Sheila,” when people ask what to call her. “I’m not on a power trip by being mayor. I have the honor of serving the citizens of KDH.”