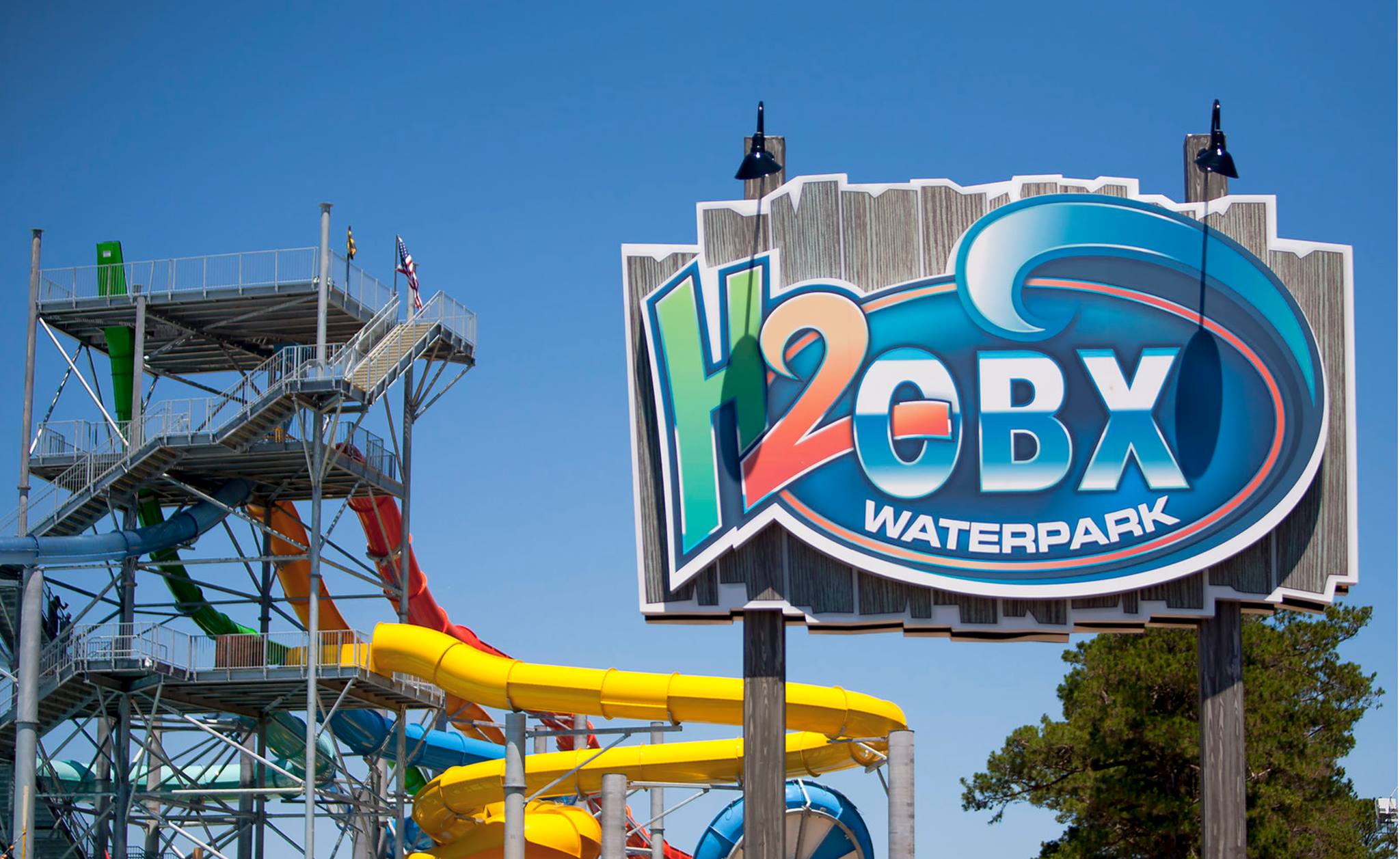 H2OBX Waterpark, a $46 million attraction with more than 30 waterslides, pools and amusements, is set to open on June 21 in Powells Point. All photos courtesy of H2OBX Waterpark.

Every summer, vehicles by the thousands drive south from Virginia to the Outer Banks, passing a few strip malls, stores and eateries and miles of empty fields.

Sometimes they’ll stop at one of the numerous produce stands along the road, but often they’re hell bent on getting to the Outer Banks.

And so it goes in reverse – sunburned, spent vacationers heading north speed on, anxious to get home.

But this summer, there may be an unavoidable temptation to stop and have a lot of fun.

Instead of the long stretches of sparsely populated land that tourists barely notice while enduring the inevitable traffic backup, there will be dazzling multi-colored slides rising up in the sky. Instead of the tedious hum from multitudes of idling engines, the air will be punctuated by squeals and screeches as children plummet and ricochet among pirates, lighthouses and wild horses. 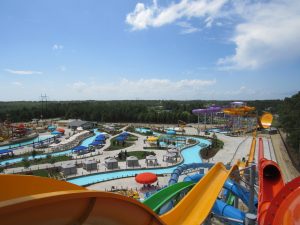 At least that’s what the cleverly-named H2OBX Waterpark, a $46 million attraction with more than 30 waterslides, pools and amusements, is intended to do: delight, entertain and/or scare adults and children in an Outer Banks-themed venue. Traffic moving too slowly? Take a break for the afternoon and cool off at the waterpark. Riptides keeping the kids out of the ocean? Dash over the bridge and spend the day at the waterpark.

Even a number of neighboring businesses, although braced for more traffic, are pretty happy about the change in scenery and the economic potential.

For the first summer, at least 300 part-time jobs and about 20 full-time jobs will be available at the waterpark. Attendance will be capped at about 5,000 people a day to maintain quality.

H2OBX Waterpark will sit on 80 acres along U.S. 158 near Harbinger, three miles north of the Wright Memorial Bridge.

Some of the rides, including a 65-foot tower and an 80-foot multi-slide with seven different waterslides, will be situated alongside the highway, serving as a built-in advertisement – and lure – to vacationers traveling to and from the Outer Banks.

The Beginning of Something New

The Currituck County Board of Commissioners unanimously agreed last May to the rezoning of the site. County Manager Dan Scanlon says the project adds significantly to the county tax base and will bring in plenty of sales tax revenue. And, for such a large effort, he says it has been relatively uncontroversial.

“I’ve only heard positive things about the project,” Scanlon says. “It seems to be well-embraced by the community.”

Barbara Hedberg, owner of Upscale Furniture Resales located a few miles north of the waterpark, says she believes it will be a great addition to lower Currituck.

“I think it’ll help the tax base here,” Hedberg says. “It’ll provide jobs for the locals. There’s not a lot of jobs on this side of the bridge.”

Summer traffic going south to the Outer Banks sometimes backs up as far north as Grandy on Saturdays, especially in July and early August. But most business owners and residents along the corridor already hunker down on the busy weekends, according to Hedberg.

“When you put in a waterpark, it enhances the area – that’s what I’m looking for! I’m excited about it. I’m not thinking it’s going to be a bad thing for traffic. I’m not going to badmouth that because the benefits will outweigh the bad.”

Lee Etheridge, a resident of nearby Currituck Woods and owner of Lee Septic & Land, says the only thing he expects to change – beside more business and jobs – is that a traffic light might have to be installed at the intersection near the waterpark. 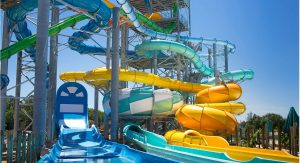 A close-up of a few of the slides.

“The traffic is already backed up,” he says.

Prior to the park construction, Etheridge says that the land was just “an old field with a spoil yard and dilapidated houses.” He hopes the waterpark will attract new shops and restaurants.

“So now that’s going to be something,” he says about the site. “It’s good for everybody because that’s full-on commercial there. It’s good for all those properties in that area.”

But Terri Bechtel, owner of Complements hair salon in Powells Point, says she’s heard concerns from lower Currituck folks about the potential for more traffic congestion or even impacts to their water supplies.

To Bechtel, the traffic – and the economic benefits – may be more a matter of which direction most waterpark attendees are coming from.

Growth in Currituck County has been more evident on the Virginia side, she says, where it’s been creeping south of Moyock. But the waterpark could spur spillover development from the northern Outer Banks, where many of Bechtel’s clients live.

“It’s totally different when ‘tuck meets Duck,” Bechtel says, chatting while trimming a regular customer’s hair. “My local people are concerned about coming over here to get their hair done. But I don’t think it’s going to make that much difference.

Still, there are lots of questions and other concerns.

“Who knows?” says Suzy Rich, owner of North Beach Services, a heating and air conditioning business located in an industrial park south of the waterpark. “It’s good for the community, probably. I’m just a little nervous. I just don’t know if it’s going to cause a lot of traffic.”

Rich, who lives in Southern Shores, is used to arranging her life around weekend traffic, as are most people who live or work anywhere near the Outer Banks during the summer months.

“I think for the most part, everybody is intrigued. I think we’re all for families getting different options for things to do. Our hope is that they do a great job and it adds value.”

Contractor Aquatic Development Group, based in Cohoes, N.Y., certainly has the right resumé to make the waterpark a hit. The company has also designed and developed waterparks at numerous attractions, including Six Flags, Walt Disney World and Great Wolf Lodge. 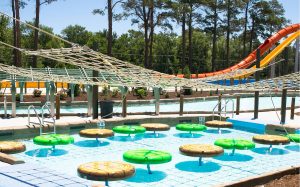 Until around the late ‘90s and early 2000s, the Outer Banks still had a number of outdoor recreational parks, including Dowdy’s Amusement Park and Surf Slide, both in Nags Head. In Kill Devil Hills, Diamond Shoals Family Fun Park boasted some modest waterslides. There has not been a waterpark on the beach since Diamond Shoals closed.

“We’re excited about joining the community,” says Justin Strayer, general manager of H2OBX, during a brief tour of the site in February.

Bright-colored pieces of slides lay on the ground, awaiting assembly once the groundwork is completed. Off to the side of the site, a wastewater treatment plant is being constructed.

The facility, with a 60,000-gallon-a-day capacity, will also include a nearby spray bed that will allow the water to infiltrate. The park will require about 76,000 gallons of water a day.

“Here’s the Teach’s Tides Adventure River,” says Daniel Finn, the contractor’s general superintendent. As he drives a cart around different attractions at the site, workers with Barnhill Construction, the lead contractor, and Hatchell Concrete of Manteo hustle back and forth.

The 1,300-foot-long “river,” Finn points out, will also have islands in the middle where visitors can rent one of the park’s 50 cabanas. Wait service will be available at the cabanas, and there will be four food outlets on site.

Initially, Strayer says, the waterpark will be open for the summer season only, Memorial Day through Labor Day weekends. The company estimates hiring more than 300 people for seasonal jobs in the first year. But depending on how things go the first year, it may stay open longer in the future.

“That’s just at this point to make sure we have the staff to operate,” he says. “I’ve heard from vacation rental managers that the bookings are strong for September and October.”

With more than 30 slides planned, ranging from mellow to heart-stopping, H2OBX will include raft rides, tube rides and launch capsule rides, a few with special lighting. “Twin Tides Family Wave Beach,” with a dual-action wave pool, is billed as the only one of its kind.

Adventure seekers taller than 42 inches will be able to enjoy high-speed tube rides that twist, turn, climb and drop. The tallest slide is 90 feet high; the longest is 500 feet. And there are plenty of less-scary slides, rafts, pools and interactive features for the little ones and families.

To illustrate the scale of the project, Finn says that the river will require 567,930 gallons of water to fill 23,960 square feet.

A 30-foot-tall version of the Cape Hatteras Lighthouse will top the admissions building, and there will be a “flyboy” bar. Common Outer Banks symbols – planes, pirates, colonists and the ocean – will be evident throughout the waterpark.

About 35 tons of millings from ground-up asphalt were left at the site, which was once an asphalt plant. That material has been incorporated into the material for the 1,689-space parking lots, including overflow. Forty acres are being developed – 26 of which is the actual footprint – and it’s anticipated that 40 more acres will be developed in a future expansion.

The genesis for the waterpark goes back to 2004, when there was an unsuccessful proposal to build a small waterpark in Corolla, says Jeff Malarney, an Outer Banks attorney who is one of the project’s owners.

Two years later, Malarney says, he suggested building a waterpark on the Currituck mainland, with buy-ins from rental management companies on the Outer Banks. Ken Ellis, president and CEO of the Aquatic Development Group, liked the idea and agreed to partner with Malarney. Developers Arthur Berry, co-owner with Ellis of Camelback Resort in Pennsylvania; and Tim Gantz, former owner of Noah’s Ark Waterpark in Wisconsin, also joined the partnership.

The Griggs family sold the company 95 acres for $4.5 million.

About 20 rental companies on the Outer Banks have signed on as investors in the waterpark, Malarney says. It’s an arrangement that allows them to offer their customers discounts to the waterpark, not to mention additional entertainment options.

“The Outer Banks is unique because it has the greatest concentration of large vacation rental homes in the country,” he says.

That means there will be a lot of visitors filling up all those bedrooms, and they’ll all be looking for fun activities.

Jason Ward, a Kitty Hawk resident who works for Beach Realty and Kitty Hawk Rentals, says that by investing, the Outer Banks companies have a stake in the success of the waterpark. But it also expands the value of what they can offer their customers.

“I think it gives people something to do,” he says.

Ward believes that Outer Banks residents are also going to enjoy the waterpark.

“Locals will help carry it in the offseason,” he says. “Locals are going to go – 100 percent.”