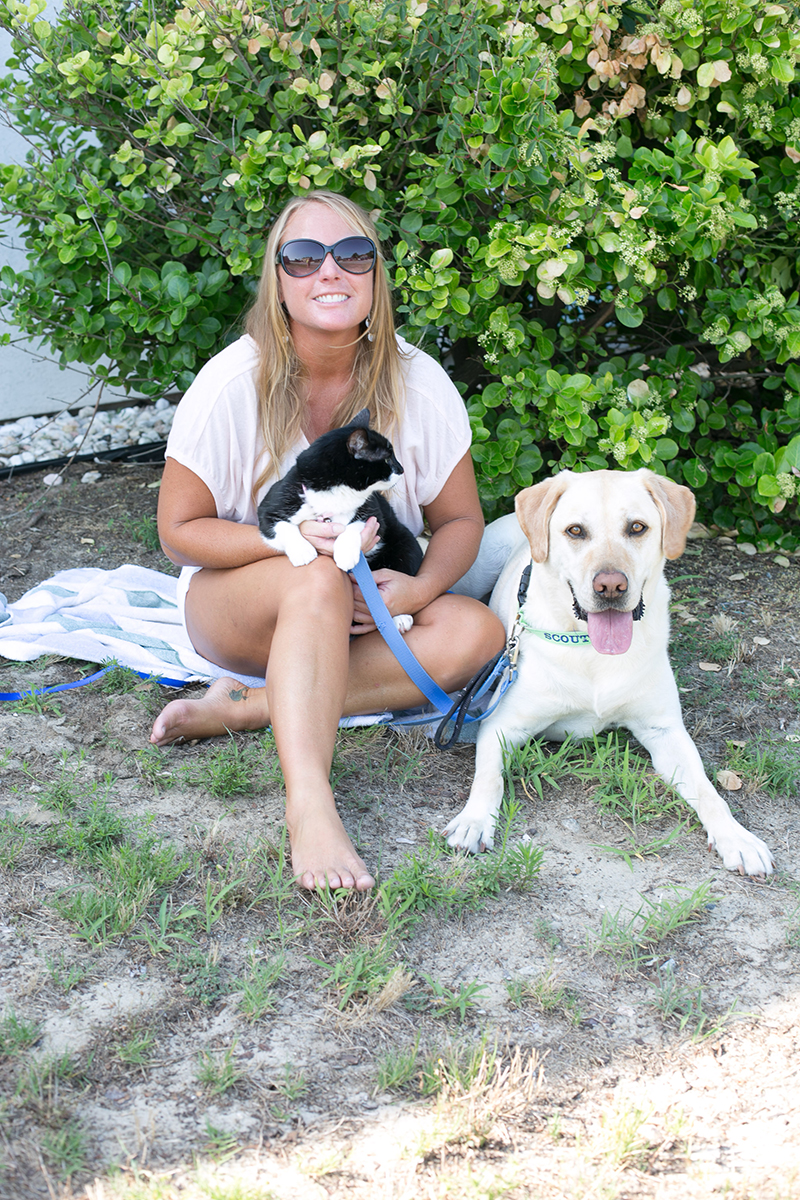 Debbie Hester with her pals Lucy and Scout (left to right). Photos by K. Wilkins Photography.

In life, we love the story of an unlikely couple. These stories are woven into the fabric of our culture and educate us on the importance of love, kindness and acceptance. They also demonstrate that even the unlikeliest of souls can be friends.

Disney has perfected this classic storyline many times. Think of the unlikely human friends: Mary Poppins and Bert, Pocahontas and John Smith, Angela Lansbury and the orphans in Bedknobs and Broomsticks. (Haven’t seen it? Pull out your VHS pronto!) The pairing of animals and humans became possible through live animation: Pete and his dragon, Mowgli and Baloo, Roger Rabbit and Eddie Valiant. And, of course, the oldest and most beloved of improbable companions are those of the animal world: Lady and the Tramp, the Fox and the Hound, Timon and Pumba.

Local author Debbie Hester found the unlikeliest of companions through an unusual connection of her own and has woven the story into a collection of children’s books she calls The Huckleberry and Jake book series.

Debbie, an elementary school teacher (but sea gypsy at heart), came to the Outer Banks 10 years ago from Richmond, Va. With her tan skin, golden sun-streaked hair and no shoes attitude, she looks like she just walked off the beach with a shell in her pocket and sand between her toes. She shared her love of the coast with her two dogs, Huckleberry and Jake, who loved running along the sand, going on long walks and riding in her red Jeep Wrangler with the top down.

Watching the interaction of these two canine brothers, Debbie was inspired to pen a children’s story – first about Huckleberry, and then about how Jake entered their family and made Huck a big brother. She kept it to herself, locked away in a drawer for almost eight years. While she had conceptualized the storyline with the premise of how pets communicate with each other while their owners are away, Debbie says she lacked the artistic talent to illustrate and bring the story to life.

But Debbie is not one to shy away from a challenge. As we sit over coffee, she describes her trip to South Africa to bungee jump from one of the world’s tallest river gorges. When asked why in the world she hurled herself off a platform with her eyes closed, she smiles and nonchalantly says, “Because I was afraid to do it.” The sparkle in her eye is undeniable. 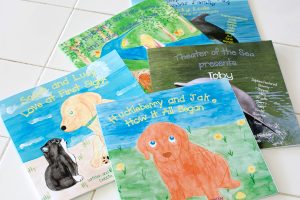 Fast forward a few years and Debbie, after teaching herself to paint, has published the first two books in the Huckleberry and Jake series. After eight years, she finally decided to dive into the fear head on and with an overhead projector, a paintbrush and some colored pencils to self-illustrate both books. Published and on the shelves in local boutiques and on Amazon.com, the series shares the tale of her two dogs that live long, full lives before going to doggie heaven. And that was where the story ended…

…Until Debbie read the two books to her second grade class at Nags Head Elementary School. They laughed at all of the right places and enjoyed the story, but asked, “When are you going to write a story about your new dog, Scout?” With the pleas of second graders in her head, Debbie was unsure of what Scout’s story was really about…until she was inspired by her friend DJ Bruce.

DJ Bruce is a local disc jockey, surfer and animal activist. Like Debbie, he has a passion for rescue animals, and he focuses on trapping, neutering and releasing feral cats. Scout’s story, which evolved into another book, begins with the DJ calling the elementary school teacher and saying, “I believe I have your cat.” Debbie was not interested in adopting a cat, but as soon as she saw Lucy, the black-and-white furball whom she frequently carries around in a blanket or walks on a leash, it was love at first sight. The same can be said for Scout, a yellow lab who taught Lucy all the ropes of the Hester household, including how to ride in the red Jeep, how to take a bath and how to spend a lazy Saturday at the beach. (Yes, Lucy the cat walks on a leash to the beach, where she hides under the beach chair and digs in the sand.)

This friendship, which began with a local DJ and an elementary school teacher, gave life to a new book. Debbie has since published their story, Love at First Sight. She has gone on to chronicle the lives of other rescue animals such as Louie the dolphin and plans to expand the series to other rescue animals around the world. If somewhere on the globe a killer whale and a sea turtle were having an underwater tea party, I would expect to see Debbie Hester swimming up and asking for two lumps in her cup with a twinkle in her eye.

The Huckleberry and Jake book series can be found locally at Seagreen Gallery, Stop & Shop, Cloud Nine, My Little Sunshine, Made in the OBX, Carolina Keiki, Outer Barks and in the back of Debbie’s red Jeep. It’s also available at Amazon.com.