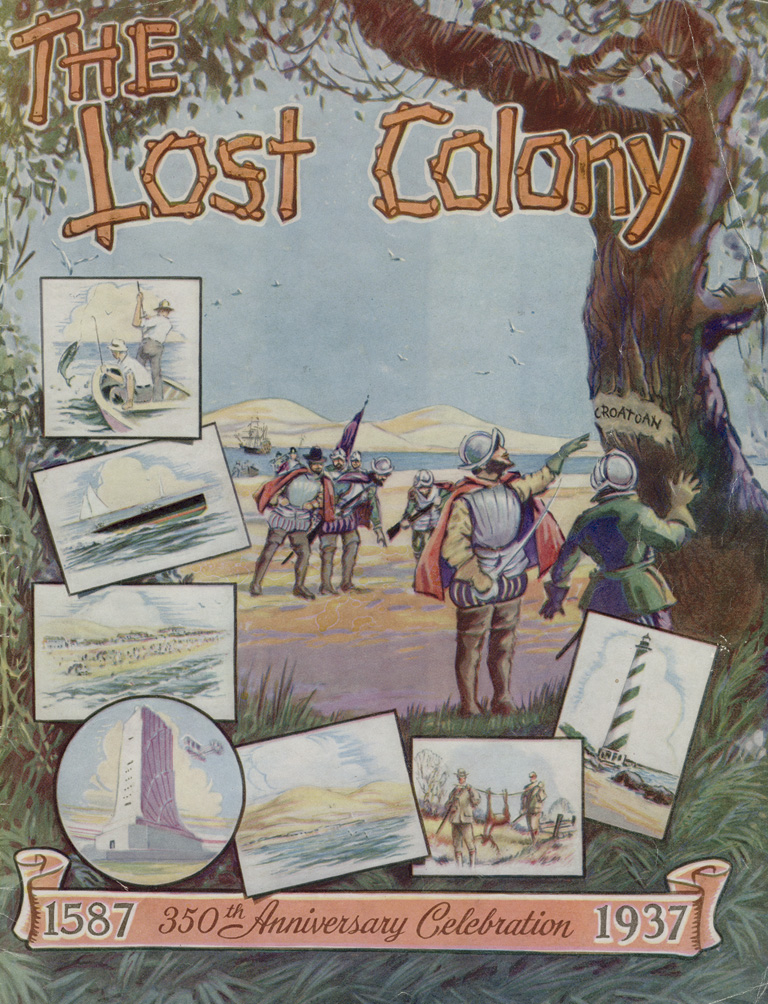 The history of The Lost Colony as a theatrical production is extraordinary. Yet as remarkable as the play is, the impact it has had on our Outer Banks community may be as important.

Seventy-five years is an amazing run for any play. Rather than tell the story, though, of how Paul Green created the play and the local business community produced it in 1937, we thought we would look at it from a different angle—the people who acted and performed in it.

Four performers wrote brief summaries of their time in The Lost Colony: Edward Greene, owner of the Christmas Shop in Manteo; Barbara Hird, the longest reigning Queen Elizabeth in the 75 years of production and now Elizabeth R; Donna Baum, who writes for us and can sometimes be seen driving a delivery truck; and Tshombe Selby, who is now the Choir Director for the production

We wanted to be unique in our coverage of the 75th anniversary of the Lost Colony, and we believe that putting the two pieces together, we’re telling the story and in a different way. 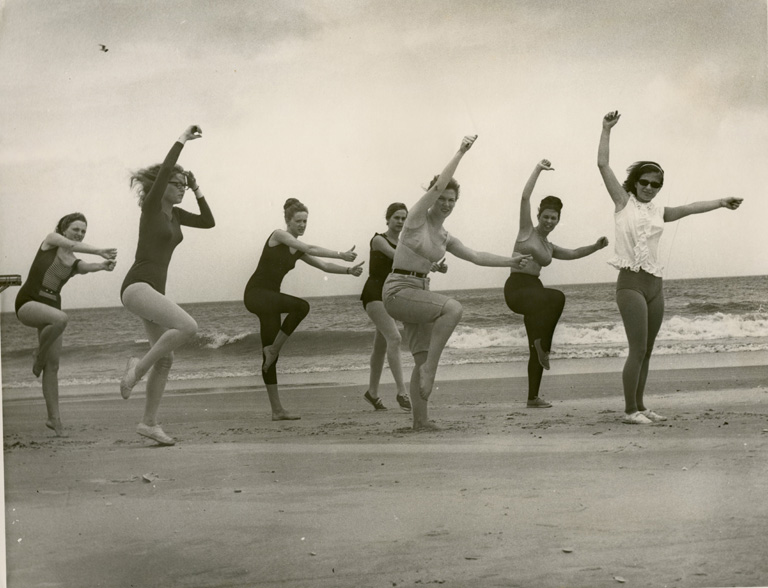 Dancers rehearsing on the beach. Courtesy of Lost Colony Archives.

History comes alive in the dusty, forgotten corners of attics. Or perhaps in the hidden photo album in the back of the garage. There is no way to know just where the artifact or document will be found that resets history or illuminates some new discovery.

The recent announcement that a new analysis of a 1585 John White map may lead to the actual site of the Lost Colony is an excellent example of how archives can inform and sometimes change the way we view history.

The Lost Colony Theatre archives are not as extensive as the British Museum’s (where the map resides), but they may be in a solid runner-up position.

For a number of years the Lost Colony archive collection was at the Outer Banks History Center, but the records were relocated to a small National Park Service building by the maintenance shed on the Fort Raleigh grounds.

Originally part of the David Stick collection that forms the core of the History Center’s archives, the collection has become far more extensive than anyone thought it would.

“David’s passion was to put everything in archives,” Lebame Houston, historian for the collection, says. “He thought he had collected all the documents there were about the colony.”

As it turned out, in spite of David’s passion for collecting, there was far, far more to be found.

The work the volunteers are doing (and they are all volunteers) is meticulous and detail-oriented. For example, they created a database listing every actor who has ever performed in The Lost Colony.

How was it done?

The original records of The Lost Colony had been stored in the attic of the old Dare County Court House, and when the office moved The Lost Colony archives took them in. By reviewing pay stubs and tax records, the volunteers were able to recreate which actors performed in which roles. 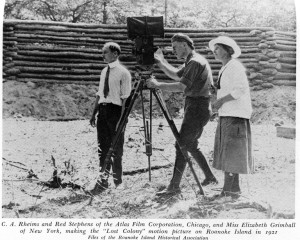 The artifacts are some of the most fascinating features of the collection. The 1921 Mabel Evans film about Virginia Dare was shown this past January. Discovered in a storage room at The Lost Colony offices, the find was either luck or house cleaning.

“Michael (Hardy, former Lost Colony CEO) moved everything out to the common room,” Houston says. “And there it was.”

Restored and transferred to disc at East Carolina University, the film has surprisingly good production values. And although clearly a black and white silent film, it has aged well.

Other artifacts filter in from time to time. “Costumes come in piecemeal,” Houston explains. “Someone will bring something to us and say, ‘I found this in my mother’s attic or my grandmother’s attic.’”

Some of the artifacts are in remarkably good condition. The cradle that rocked Virginia Dare in the 1921 film is part of the collection. “LaVerne Davis brought the cradle in,” Houston says. “She told us, ‘It was in my father’s attic.’”

At this point in time, the archives are not available for viewing—in fact they have not even been completely catalogued. “We have 400 boxes catalogued,” Houston says. “And we still have another 800-900 boxes to catalogue.”

Plans do call for a small display of artifacts in conjunction with the 75th anniversary production. Additionally, Houston is hoping to have digital archives available for the public online. “I’m thinking January (2013),” she says. 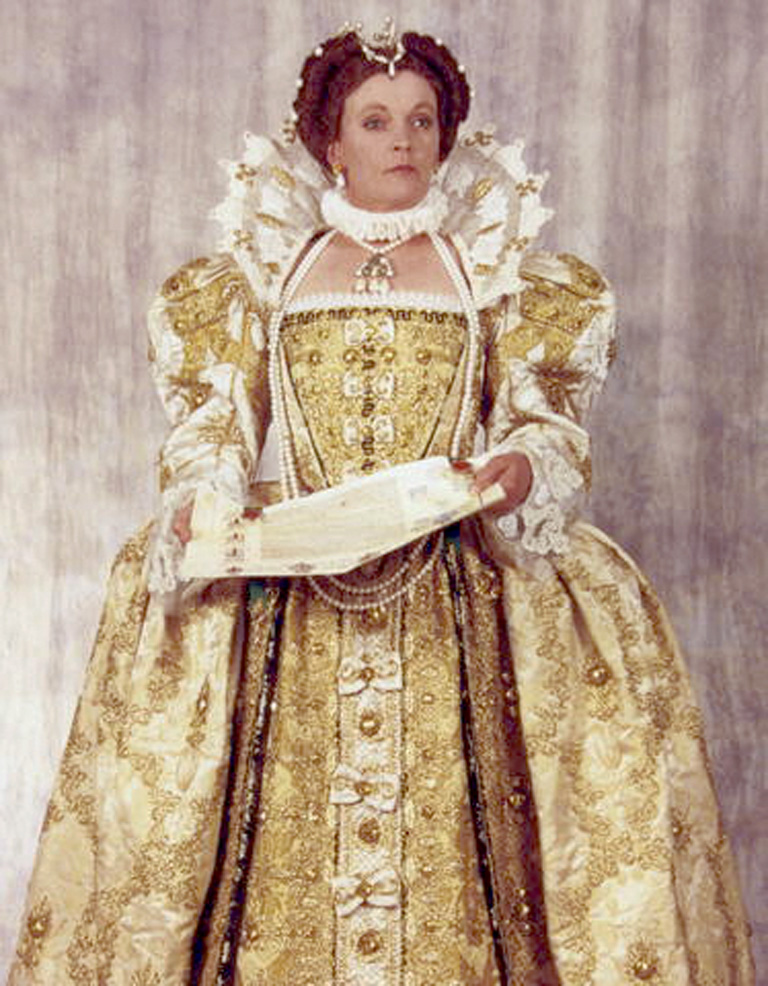 The life of an actor is, by nature, peripatetic.  We go where the work is to be found and that often means working out-of-town for periods of time, returning home, and then traveling again when more work is found.

When I was cast as Queen Elizabeth in The Lost Colony for the 1986 season I was thrilled to have such a stellar role, and equally thrilled to have a job that would last for 13 weeks. As it turned out, my on-stage association with the show lasted for 10 summers and I looked forward to returning to my home-away-from-home every year.  The Lost Colony became so important to me that I stopped auditioning for other summer acting work and even turned down work that would impinge on my annual pilgrimage to Roanoke Island.  The show, the people, and the area became an essential part of my life.

It was not, however, simply a question of having steady summer work.  It was, and is, far more than that.  Roanoke Island is now my permanent home and I count myself among those fortunate souls who, although not born here, have still been able to find their way to “the goodliest land under the cope of heaven.”

Edward Greene – Owner of the Christmas Shop in Manteo

Little did I know, back in 1953, that when I accepted an offer to be one of the first professional dancers in the Lost Colony, that my life would be changed forever.  I was completely smitten by the production The Lost Colony: the 17 year history of the production; the established tradition; the character and charm of all the locals who were in it; the history of the locals; the culture of the locals; the friendliness of the people; and the actual environment… all of this was set in place.

As fate would have it, I never would appear in it again.  But, whenever I was not working or touring the country with a show, I would zip down for a week or two just to be near the Colony.  When I retired from professional theater, I moved to Manteo and started the Christmas Shop.

For close to 25 of the past 45 years, I have served on the Board of Directors.  I am very excited about the 75th Reunion because I will get to see many of the friends that I have made over these past 59 years.  Thanks, Lost Colony!

Thinking of The Lost Colony always conjures up my teen years and somewhat imprinted, is the smell and feeling of the Lost Colony Building, just as my grandparents’ home. I auditioned toward the end of the seventh grade and got a part as a colonist child. The parts I played varied over the years as I grew; however, it became solid ground for an insecure youth.

I looked forward to each summer. It was work, but it was more like fun to me. Backstage friendships blossomed and on stage confidence grew. I experienced an acting workshop with Bill Cosby, walked along with Lady Bird Johnson as she got a backstage tour and I witnessed the meeting of Andy Griffith and his wife Cindy. I had a crush dark-haired boy and amid the beauty of an unmatched sunset, received my first kiss.

I was cast-mates Chris Elliot of “Cabin Boy” and “the guy under Dave Letterman’s seats”, received tutelage under our famed director Loe Layton, and through it all came to realize the humanity found among artists, where camaraderie isn’t “formed” it just “is”.

Looking back, I value the extraordinary and the average days spent among people who lived with a passion for life and their craft.

It has truly been an honor to be a part of the cast at The Lost Colony for the past two summers. Before joining the company most of my performing experience had been in my undergraduate studies at Elizabeth City State University. I was hesitant to go to the local audition at the old middle school, now COA in Manteo. However I was persuaded by Lebame Houston and Barbara Hird to give it a try.

When I got to the audition I was greeted by many familiar faces who had encouraging words to go along with the legendary Manteo grin that says: “You have nothing to worry about. We’ve have got your back.”

To me it is not just the history of the show, it is that I am able the add the Selby name to the long list of local families such as Basnight, Midgette, Meekins, Etheridge and other local families who have been a part of the show since 1937.

Since being in the show I have come to appreciate that, although the fate of the colonists is still unknown, their spirit lives in every generation of Dare County citizen old and young.

As a native of Manteo, The Lost Colony is truly a fantastic experience. The pride it gives  me that I am able to give back to the community in such I way makes me stop and reflect on how truly fortunate I am to be from Manteo.