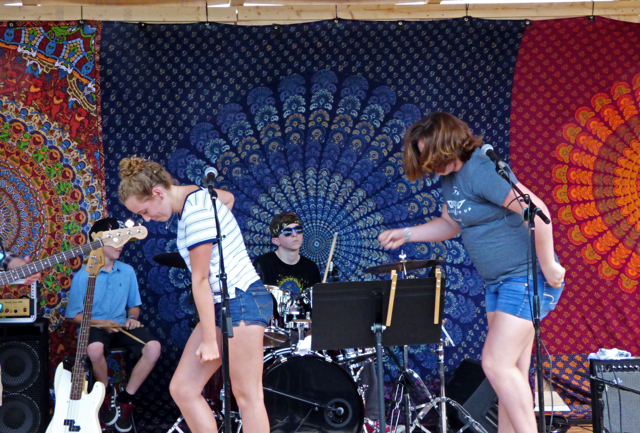 The kids rocked the house . . . they just killed.

We’ve been writing about the Mustang Music Festivals since the first one kicked things off in 2012. We’ve reported on the outstanding music; what a great venue it is for families; and in general how exceptional it is to spend a day in Corolla enjoying an incredible variety of music and musicians.

But this year it’s time to focus on the kids of Mike Dianna’s Mustang Music Outreach . . . the kids who have been working with Ruth Wyand and Shelli Gates, learning about music, learning about performance and getting steadily better.

Because this year it all came together.

“They just really pulled it off,” Wyand said.

Starting out with a great set that included Paint It Black by Cheap Luxury–the 6th graders, the music just kept getting better and better. Grace Deichler and Kamea Blake did a wonderful set featuring ukulele and a folk-like sound.

The show stopper had to be, though, the older kids, playing under the name Last Days of May, performing Bruno Mars Uptown Funk.

Kameah and Grace tore into the Mars song with the verve and gusto of seasoned professionals. Sam Wills on lead guitar was perfect; incredible energy from Elise Seawell on rhythm guitar; Jacob Mandis never missed on bass; Joe Sawin on keyboards and vocals was right on cue and Jonah Wills was great on drums. In short, it was fun, funky and what music is all about.

Dianna has been sponsoring the program for the past few years, watching it grow from an idea to something that has real substance. “It’s (the program) been taking baby steps,” Dianna said, describing the first few years of the what he has been working on.

It all seemed to come together on Sunday—a point Dianna is quick to acknowledge. “I’m really proud of what we’re doing and how it’s progressing,” he said. “The progress they’ve made this year is fantastic.”

He pointed particularly to the work Wyand is doing with the kids. “It makes it so special for the kids to work with someone of Ruth’s caliber,” Dianna said. “She is so important to the program. She keeps them engaged and keeps it fun.”

The kids were not the only performers taking the stage, and once again Mike managed to round up a truly eclectic range of music, including the bluegrass rock of the Fireside Collective. Really, bluegrass rock—how else could the lead to Johnny B. Goode played on mandolin be described?

Then finishing up with the New Madrid—modern sound but definitely a throwback to the days of Southern rock.

It’s for a good cause too. The Mustang Music Outreach benefits kids on the Outer Banks and the original purpose of the Mustang Music festivals was and and still is a fund raiser for the Corolla Wild Horse Fund.