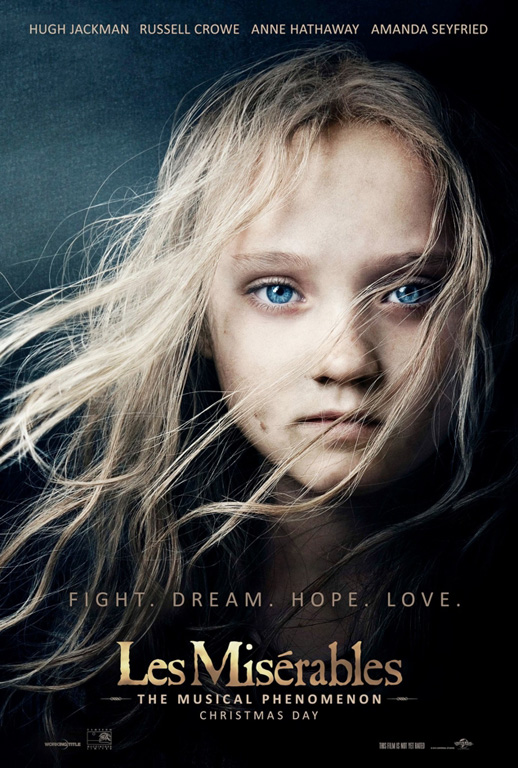 I took my daughter to see Les Miserables at the Kill Devil Hill Cineplex last night. A very enjoyable evening and I would recommend the movie. I would even say it would have been a great movie if not for  the heavy hand of director Tom Hooper. The acting was wonderful, vocals went from very good to Wow (!), the set designs stunning, makeup amazing.

Everything about the movie warrants all of the good press it’s getting—except for the direction which was, to me, so intrusive it was like being smacked over the head with an iron skillet filled with metaphors and symbolism at times.

Éponine (played by Samanth Barks in an amazing movie debut) has been shot as she stands at the barricades during the revolution. She is dying in the arms of Marius (Eddie Redmayne), a man she loves but who has shown her only respect and compassion. It is a dream come true for her, and her dying duet with Marius is an extraordinarily moving tribute to love and dreams fulfilled.

A crumpled revolutionary banner is the backdrop to the scene and just over her head is the French word “mort” or death in English. I found that somewhat heavy handed.

Then there was the scene in the cathedral where Jean Valjean (Hugh Jackman) is wrestling with the moral implications of a gift from the Bishop. He sings his dilemma as he walks between the pews, and as he does so, the camera backing up with him, turns his trek through the cathedral into something resembling a Bob Fosse dance routine without the footwork.

And then there’s the close-ups. At this point in time I can tell you how many facial hairs both Russell Crowe and Hugh Jackman have and what kind of dental work Anne Hathaway has had. The extreme close-ups came during some of the most emotionally trying scenes, and just in case the audience did not understand the despair of the characters, there would be tears running down their faces.

It is unfortunate that the director got in the way of so many powerful, memorable performances.

Anne Hathaway as Fantine has to be seen to be believed. An absolutely transcendent performance that is at once courageous and compelling. What she created as she sang I Dreamed a Dream has defined that song for me for a lifetime. She has already won a Golden Globe for the movie and after seeing that performance, hopefully she will win the Best Supporting Actress at the Oscars as well.

Amanda Seyfried was luminescent in Letters to Juliet, but in Les Miserables a whole new dimension of her talent is revealed. Imagine the most beautiful songbird you had ever heard, and then give form and substance to it in the shape of Amanda Seyfried and that’s what you have.

Hugh Jackman’s Jean Valjean and Russell Crowe’s Javert were characters caught in a dance of fate, trapping them both in inevitable actions that could only have one outcome. They breathed a life into Victor Hugo’s characters that was fulfilling and wonderful.

In a cast of classically trained voices, theirs were probably the weakest—but weakest is used advisedly. Both actors had voices that were dynamic and strong throughout the range of their performances.

There were so many other wonderful performances as well. Sacha Baron Cohen and Helena Bonham Carter were a delight to watch as the venal innkeepers who kept the young Cosette, as an example.

The set designs were a show unto itself, leaving no doubt about the misery of the French underclass in the early 19th century. Costumes enhanced the feel of the movie.

In short, I loved everything about Les Miserables . . . except the direction.